52nd annual East Ferris Santa Fund is prepared to lift more spirits but needs more suggestions of who could use help
Dec 5, 2020 10:30 AM By: Dave Dale 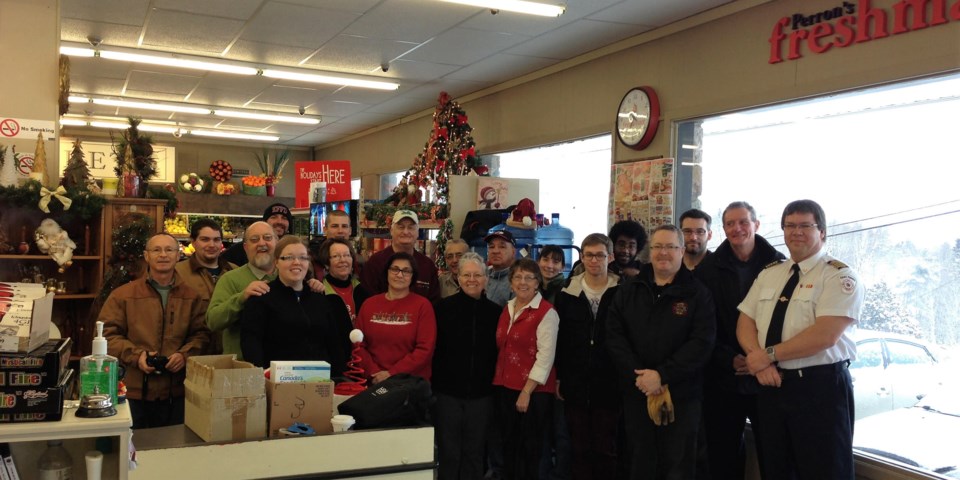 The East Ferris Santa Fund volunteers at Perron's Freshmart in Astorville a few years ago. The 52nd annual fundraiser for needy families is going ahead a little different this year. Supplied Photo

Do you know a family in Corbeil or Astorville that may benefit from having a hamper of food and gifts for children delivered to their home before Christmas?

Paul Gauthier, who has been coordinating the East Ferris Santa Fund for 19 years, said they only have 12 families on their list so far this season.

“Last year, we delivered food for 37 families and gifts for 37 children,” Gauthier said, adding they know there’s been more hardship this year due to COVID-19 pandemic.

He was expecting as many as 50 families to be recipients for 2020, the 52nd annual event supported financially by hundreds of businesses and individuals.

Gauthier said they think their flyer to all the households in the municipality got lost in the junk mail. Usually it’s sent out on a Monday when there’s less likelihood of it getting mixed in with other fliers delivered by Canada Post, he said, noting that wasn’t the case this time.

While the form states there’s a deadline of Dec. 8 to receive requests or suggested family names and addresses, Gauthier said they’ll accommodate applications right up to the last day.

Par for the course during this pandemic year, the process for the Santa Fund volunteers is different too.

Gauthier said all the gifts for children are usually wrapped by the older students in local schools, which gives them a chance to be part of the good cheer. But he said that won’t happen this year either to mitigate potential for viral spread. The games and toys, obtained through Creative Learning, will be wrapped by their staff instead.

Also different will be the handling of hampers. This year, the staff at the Perron’s Freshmart in Astorville will fill the hampers (instead of the Santa Fund committee members) and bring them outside to the East Ferris Volunteer Fire Department personnel to do the deliveries Dec. 20.

If you know someone in need or want to donate, text 705-498-7423 or email paul.gauthier.carpentry@gmail.com or send a letter to East Ferris Santa Fund, 74 Voyer Road, Corbeil, ON P0H 1K0