Vrbetic shuts the door in 4-0 win over Barrie 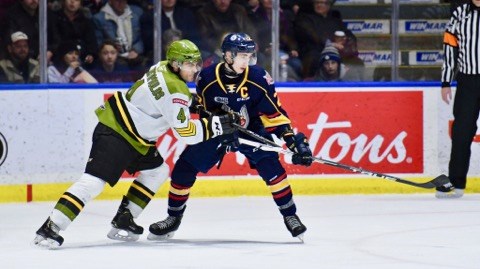 Paul Christopoulos fights for position against the Colts. Photo by Sean Ryan.

Battalion Head Coach Ryan Oulahen was looking for more competitiveness out of the whole lineup after the 5-4 overtime loss against Sarnia on Thursday. That message must’ve gotten through as it was all four lines that chipped in to get the Battalion off to a great start, jumping out to 3-0 lead by the end of the first 20 minutes and holding off the Barrie Colts for a 4-0 win.

“It feels good for sure, but it’s just a good team win overall. It was just kind of the cherry on top for me, but a great team win and I’m glad we got it,” says Vrbetic. He had to stop 21 shots in the second period alone as the Battalion found themselves penalized six times in the second. He says, “It was tough for sure, but I’m glad all the guys battled through it and it worked out overall.”

Brandon Coe opened the scoring with a beautiful backhanded shot while racing down the left wing that went into the back of the net behind Jet Greaves for Coe’s 19th of the season at 10:45.

Coe then helped set up the second goal by going hard into the corner in the Barrie zone to knock the puck off the stick of a Colts defender. It ricocheted toward Troops defender Nick Grima, who flipped it over to Shane Bulitka in front of the net and pulled it around Greaves for his 21st of the season and fifth in 15 games with North Bay. That goal came at 17:08 and less than 50 seconds later, the fourth line of the Troops got on the board as Chad Denault set up Josh Currie (4) on the left side of the zone to fire in the third goal of the opening period.

It was Joe Vrbetics's time to shine in the second period. He stopped all 21 pucks that came his way in a 20-minute stretch that was filled with special teams galore. Nine penalties were assessed between the two clubs, including a five-minute match penalty to Paul Christopoulos for a slew foot at 12:43. While killing off the major penalty, Pacey Schlueting took a two-minute minor for kneeing and that gave Barrie a 5-on-3 that they couldn’t capitalize on. In the dying moments of that extend kill the Colts got the puck to a wide-open Ethan Cardwell in the bottom of the left side face-off circle. He ripped the puck toward the net and it bounced off the post, hit Vrbetic in the back and then Cardwell followed up with a second shot on the doorstep of the crease that Vrbetic sprawled out and stuck out the paddle to make the save.

“I just happened to see the puck the whole time, I saw it hit off the post and felt it go off me and knew he was going to shoot so I threw the paddle down, it hit my stick and I was lucky enough to grab it with my glove,” says Vrbetic.

He made another nine saves in the third period to end the game, which Battalion Assistant Coach Scott Wray says was a well-deserved win for the young goaltender, “it’s nice to see him get the shutout and he earned it. He made some huge saves and he didn’t have to overextend himself to make those saves.”

“He was in the right spot before the shot was taken and that’s when we knew that he was dialed in,” added Wray.

The win snaps an eight-game losing streak and gives them points in back to back games for the first time from December 29th to January 2nd in which the Battalion went 2-0-1-0 in that stretch.

Wray says right out of the gate they played what could easily be described as their best first period of the season as they built up the three-goal advantage, but they also stayed out of the penalty box, which was a big focus going into the game. That was not the case in the second, but Wray says killing six penalties in that portion of the game and three more in the third shows the team was engaged and focused on doing the hard things necessary to win games.

He says, “Both Joe (Vrbetic) and our penalty killers came up big, they blocked a lot of shots and sacrificed their bodies to win this game. It’s a huge number of kills against a talented hockey team and goes to show that they were committed to winning this thing and it was all done by committee, not just one guy and it was a lot of fun to watch.”

One of the penalties assessed to the Troops was a match penalty for a slew foot by Paul Christopoulos and it is likely he will have to serve a suspension due to the play.

The fourth North Bay goal came via an empty netter that was put in by Mitchell Russell (20) at 19:55 to give him four points in two games this weekend (2+2).

North Bay couldn’t capitalize on any of their power play opportunities going 0/5 on the night, however, they only got to complete one of those man advantages with a full two-minutes as they would either take a penalty while up by a man, or they would start with just seconds remaining. The Troops were outshot 41-33 but dominated the first with a 17-11 advantage in that category.

North Bay will look for a third straight game with a point to finish the weekend when they host Mississauga on Sunday afternoon at Memorial Gardens.