The Powassan Voodoos are moving on to the East Division Final in the Northern Ontario Junior Hockey League playoffs.
Mar 25, 2019 12:09 AM By: BayToday Staff 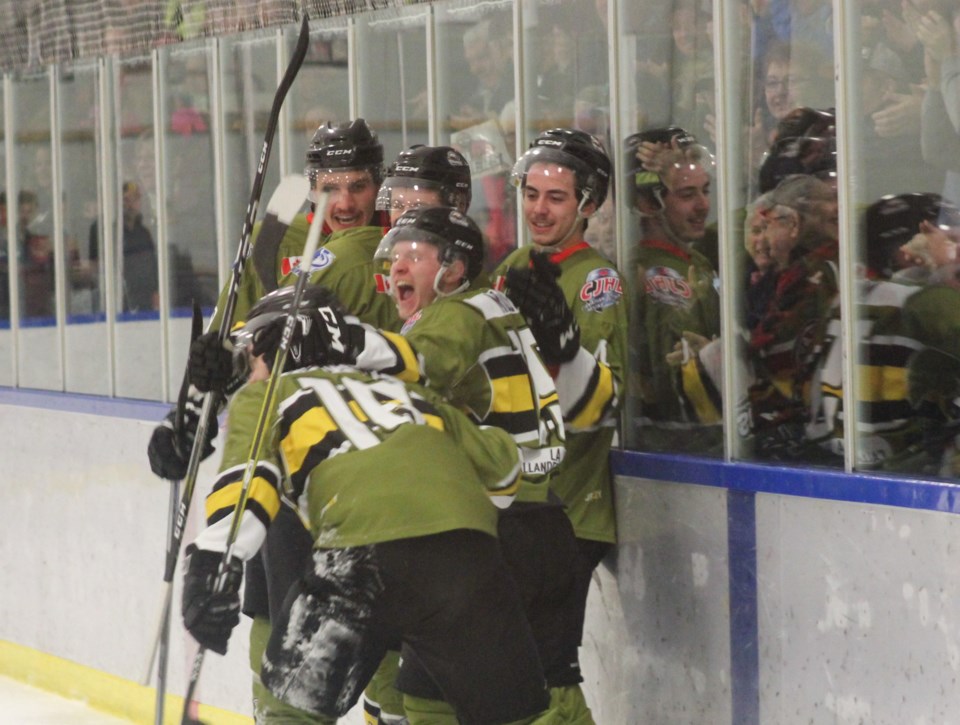 The Powassan Voodoos are moving on to the East Division Final in the Northern Ontario Junior Hockey League playoffs.

Powassan punched their ticket to the NOJHL final four by defeating the Kirkland Lake Gold Miners 6-4 on home ice to take the hard-fought best-of-seven divisional semifinal affair in six games.

After playing a lengthy triple overtime contest Saturday night in Kirkland Lake, both sides found their scoring touch early in this one at the Powassan Sportsplex as each club tallied twice in the opening 20 minutes Sunday.

Voodoos Defenceman Cameron Moore, who had two tallies and left the ice twice due to injuries during the game, was thrilled by his teammates drive to finish the series off especially coming off Saturday's 4-3 marathon triple OT loss in Kirkland Lake.

“I think it showed character for us as we rallied as a team after losing such an emotional game," said Moore.

"We kept our heads in it and kept focused on our goal. Having such a good crowd definitely motivated us to get the job done. We stayed together and positive which created us to have success when it mattered.”

“It was a tough loss back in Kirkland Lake in triple overtime, but we all kept our head up and came to the rink today to win a hockey game and a series, and we successfully did so by overcoming the fatigue and working hard as a team,” said Yachmenev, son of former NHLer Vitali Yachmenev.

Noah Cauchi put Kirkland Lake up 1-0 at 4:09 only to see Seiji Martone strike while the Voodoos were down a man to knot it at 1-1 with half a period to play.

The back half of the session saw each squad convert on the power play thanks to Aiden Wagner for the visitors and Gabinien Kioki for the hosts.

Powassan came out quickly in the second to go up 3-2 as Tomas Yachmenev potted his fourth just 29 seconds in.

However, Gabriel LeBlanc answered that for Kirkland Lake at 13:35 to knot the score once more.

Back and forth they went with Cameron Moore putting the home side back on top a couple shifts later, which resulted in the Gold Miners replacing starter Dawson Rodin with back-up Gregory Brassard.

An early double minor helped the home side extend their cushion on a Jacob Peterson-Galema effort at 3:38, in what proved to be the game-winner.

Battling back, Kirkland Lake capitalized on a man advantage opportunity of their own with 7:56 remaining in regulation on Wagner’s second of the contest.

They then pulled Brassard late in favour of an extra attacker, but Moore scored into an empty net during a power play to help secure the victory.

Powassan goaltender Joe Vrbetic made 37 saves to earn the win.

Brassard suffered the season-ending defeat in relief for the Gold Miners stopping 11 of 12 while Rodin saved 12 of 16 in 35 minutes of work.

The Voodoos will now meet either the Timmins Rock or Hearst Lumberjacks in the East Final.