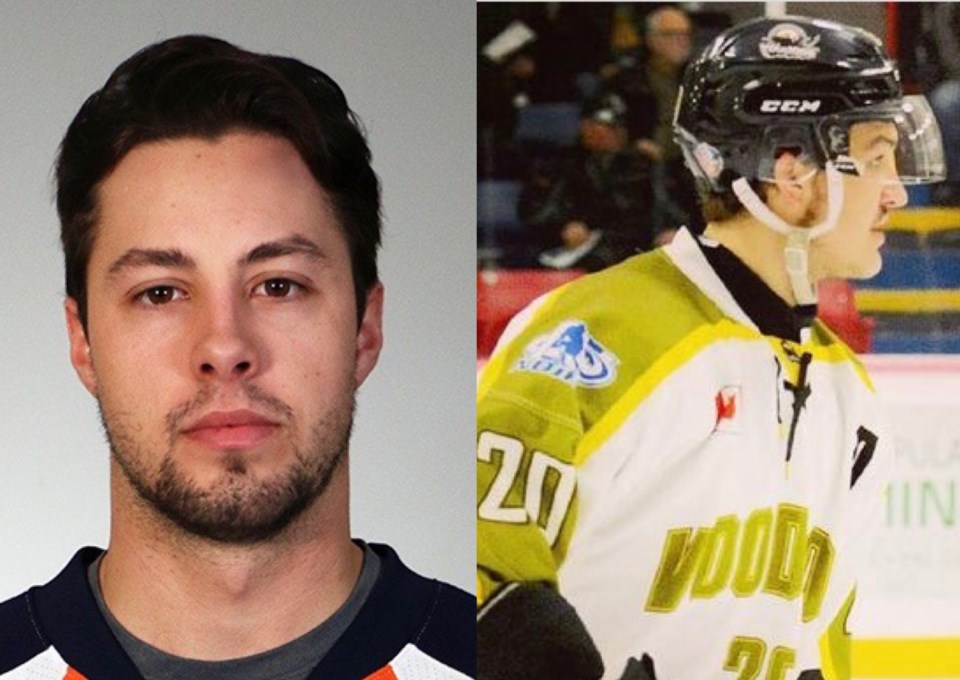 The Powassan Voodoos stayed close to home to add their latest assistant coach.

The Voodoos are adding former minor professional hockey player Caleb Cameron to the coaching staff, the club announced on Friday.

The 28-year-old Sundridge, Ontario product just left professional hockey where he played in both the ECHL and the SPHL from 2017 to 2020.

Before that, Cameron played four seasons of NCAA Division I hockey with the Rochester Institute of Technology (RIT).

Chris Dawson, Voodoos general manager, believes that playing experience will make a good addition to the coaching staff which includes new head coach Marc Lafleur and longtime returning assistant coach Josh Dale.  Brent Tomlinson, who was behind the bench in 2020, will focus on his hockey recruiting duties as Voodoos associate general manager.

"Caleb Cameron is a local success story and he is excited and willing to learn," said Dawson who was recruiting Cameron as a player back in 2010 for the Jr. Trappers.

"I think it is a nice fit go go along with our new head coach and the two have connected and hit it off."

Cameron, who played junior in both the OJHL and the GOJHL, hopes to make the most of the opportunity with the Voodoos.

"To be able to have the opportunity to coach with the voodoos is an honour and I am super excited," said Cameron.

"It has always been a goal of mine to get into coaching once my playing career was done and the fact that I have an opportunity with an outstanding organization such as the Voodoos is everything I could have hoped for!

"I've known Chris Dawson for a while and we had chatted about the possibility of this coming into fruition. I know Chris's passion for the game and commitment to excellence are unparalleled. After speaking with head coach Marc Lafleur I knew this was a great fit for me. I cannot wait to learn a ton from Marc who has had a tremendous coaching career, and I look forward to bringing a ton of passion and knowledge to the bench.

"I have been able to mentor and train with a ton of local hockey player’s from the Almaguin and North Bay area in my off-seasons, and I am super excited to be staying in the area that I grew up in and love," he said.

The Voodoos, who have already started the recruiting process for the 2021-22 season, have brought in a familiar face as a new scout.

Dayton Murray, a former Voodoos all-star defenceman, will join the team as a Western Canadian Scout.

"We always say our players are our best recruiters," noted Dawson.

Murray played two seasons with the Voodoos scoring 33 goals as a defenceman from 2016 to 2018. Murray also played four games as an call-up with the North Bay Battalion in 2016-17.

The Spruce Grove product was also a key part of the Voodoos blueline with the team that went 12-0 in the players en route to the franchise's first and only NOJHL title in 2017.

"So what better than a former player who won a championship with our program to help recruit players for us. It's a perfect fit and I welcome Dayton back to the Voodoos now as part of our young scouting staff which includes Nick Porter and Dillon Anderson here in northern Ontario."

The Voodoos are hoping to get back on the ice this summer at a number of locations once COVID-19 restrictions are lifted and arenas can re-open this spring and summer.

The Voodoos expect to begin making player commitment announcements in early May.