JoPo said she wishes she could help fight the fires, but lacking experience, she wrote a song instead
Aug 8, 2018 7:00 PM By: Heidi Ulrichsen 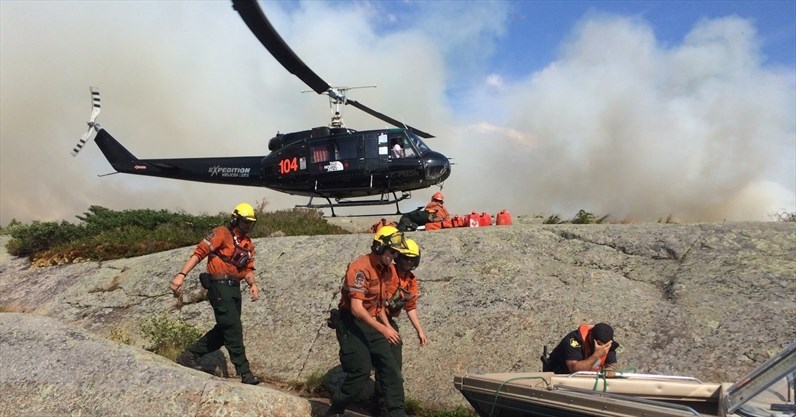 Smoke billows out from behind a group of fire rangers and an OPP officer. (Shawn Rae photo)

Northern Ontario musician JoPo is so inspired by the efforts of the firefighters trying to put out the Parry Sound 33 forest fire that she's written and recorded a new acoustic single and music video dedicated to them.

The song, “Parry Sound 33,” already has more than 50,000 views between Facebook and YouTube, said JoPo, whose full name is Joanne Pollack, but goes by her nickname.

“A couple weeks ago, I was out at my camp on Penage, and I woke up in the morning and I could see smoke and smell smoke,” she said.

“I thought wow, this is getting scary. When I came back home to Sudbury a couple days later, I could see and smell the smoke again.

“I felt like I should just drop everything and go help fight these fires, and I don't have experience in that.

“So I thought I'm going to raise more awareness to everybody in our area in the north, and write a song about it in tribute to a big thanks to our firefighters.”

She composed and recorded the song within a few hours, and then she and video director John Hartman (Icedrum Media) hit the road.

They spent time in French River, Britt and Parry Sound, meeting with MNRF fire managers and volunteers, and getting footage for the music video. Footage of the fire itself was provided by the MNRF.

Jo Po, who grew up in this area and has spent most of her life here, said she had a lump in her throat and a heavy heart as she got closer to the fire.

“Driving through thicker smoke is a scary and eerie feeling, and it just got real,” she said.

“To put ourselves right in the middle of everything going on over there just meant the world to me, and to be able to bring it back and write a story and a song about it.”

Through the video, Jo Po draws attention to the story of Jerry Gadwa, a veteran forest firefighter from Kehewin Cree Nation in Alberta, who died July 26 while fighting the Northern Ontario forest fires.

He leaves behind his 10-year-old son Jeramy. A GoFundMe page has been created to help with his son’s financial burdens and dealing with the sudden loss of his loving father, and Jo Po urges people to donate if they are able.

You can check out JoPo's Parry Sound 33 video below or on YouTube. The video was produced by IceDrum Media in Sudbury.