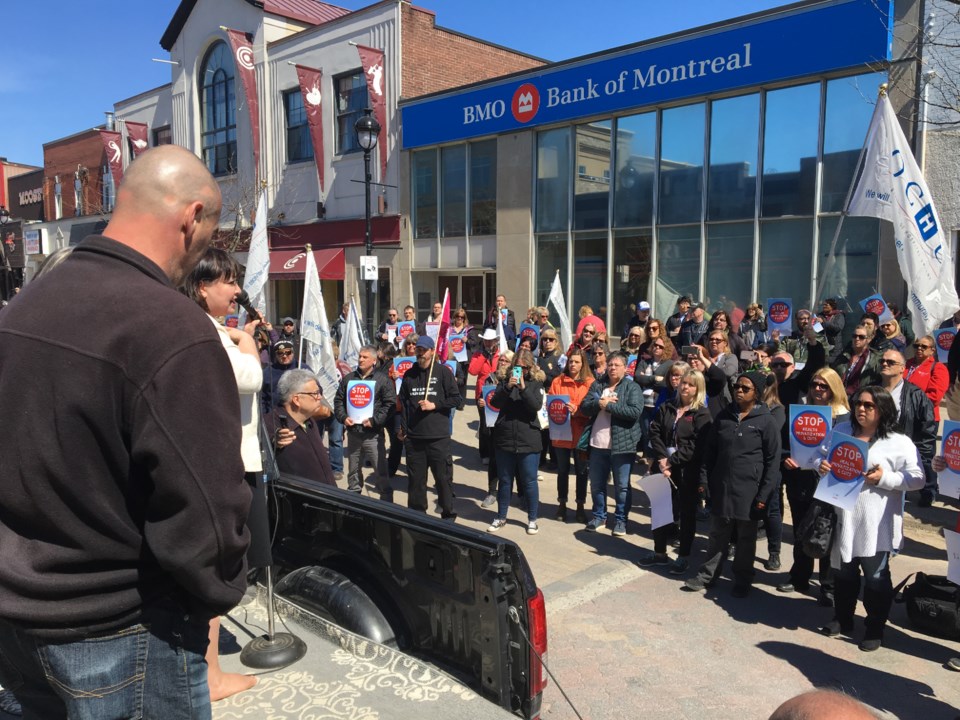 Protesters gather outside Vic Fedeli's office. It's the first of two protests scheduled outside his office today. Photo by Chris Dawson/BayToday.ca.

Henri Giroux recalls when Vic Fedeli was with the opposition he was very concerned about health care.

Now that the Nipissing MPP is the province's Finance Minister, Giroux says his government is letting Ontario and its constituents down.

Union officials gathered outside Vic Fedeli’s constituency office to voice their concern over indications from the new provincial budget that privatization will lead to more health care cuts.

The event comes on the heels of CUPE meetings which have been taking place this week in North Bay.

“We underspend on health care by about $400 per person per year which explains some of the access problems we have,” said Hurley, OCHU President.

“Cuts will not solve these problems as we all age and demand more health care services.”

Hurley believes the cuts are taking place in the wrong areas. He believes increasing corporate tax levels should be the provinces cost saving focus.

“When we start to see these cuts coming, for example to public health a budget cut by $200 million, the reduction of the number of ambulance services and that is just the tip of the iceberg in terms of the cuts and privatization that are coming people have to ask themselves whether Ontario’s approach to fiscal matters is actually appropriate,” said Hurley.

“We have got the lowest level of corporate taxes for example of any province in Canada and of any state in the United States, like we are at the very bottom.”

Fedeli, did not attend the protest but did say that the noon protest is another fear mongering event.

“We will balance the budget in five years, while protecting what matters most – health care, education and our core public services,” said Fedeli in a statement.

“The health care budget increases by $1.3 billion this year, with $384 million more for hospitals and $267 million added to home care.  In addition, we are investing $90 million in a new low-income seniors dental plan.”

In the meantime the unions will continue to put pressure on the province.  Hurley even used the term “militant” when describing their passion for the cause, but he added they are not looking at breaking any laws through future protests.