'We are going to mobilize our members and our communities in support of those services and we are going to do our best to push the government back from those cuts'
0
Sep 5, 2019 3:00 PM By: Chris Dawson 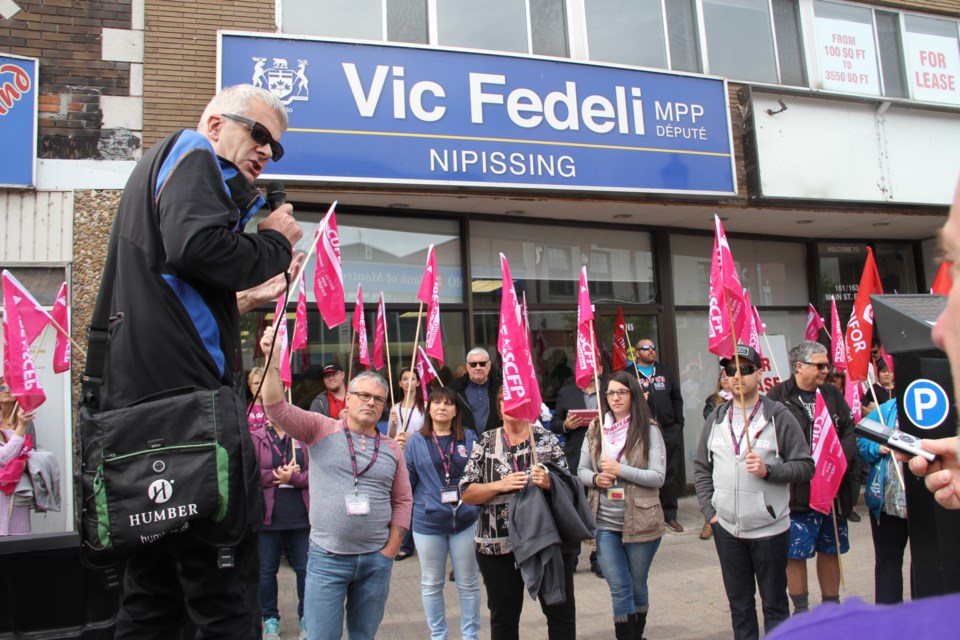 John Clarke, with the Ontario Coalition against Poverty, speaks at a rally in downtown North Bay. Photo by Chris Dawson/BayToday.

Michael Hurley believes a rally in front of Vic Fedeli’s office today is the start of many that will be taking place in northern Ontario in the coming months.

The First Vice President of CUPE Ontario was one a number of protestors outside the Nipissing MPP’s constituency office in downtown North Bay around noon.

“The five-year budget plan the government announced in May shows deep cuts to public services, particularly to health care and to social services,” said Hurley.

“So we have been meeting here in North Bay, locals from across northern Ontario and we are resolved, we are going to mobilize our members and our communities in support of those services and we are going to do our best to push the government back from those cuts,” said Hurley.

The rally coincides with a northern Ontario CUPE conference which is taking place this week in North Bay.

John Clarke with the Ontario Coalition against Poverty believes under the Ford government the health care system is more compromised and public services are more under the gun and inadequate.

He believes the province is in worse shape than back in the Mike Harris days.

“I think the impact of the Doug Ford austerity agenda is inherently worse than that which took place under Mike Harris,” said Clarke who is from Toronto.

“Precisely because Mike Harris and what came after him has done so much damage, social programs now are so overstretched, the homeless crisis and crisis of poverty has worsened.”

“We are trying to make sure that this government knows that we are out here but the main thing today for this rally is Bill 124,” said Giroux.

“That’s where the government is going to dictate to us how we are going to negotiate from now on and they have not passed the bill yet but they are looking to pass the bill when they go back in the house and they said they will go retroactive to June fifth when they put the bill in motion.

“What we are saying is that it is not a good bill, and we are asking Fedeli today to remove the bill completely and let us negotiate the way we should be negotiating.”

In a statement, Fedeli said the government is protecting services that matter most to people.

“We are helping to ensure future generations are not left to deal with the burden of past financial mismanagement,” said Fedeli.

He believes the rally is just more fearmongering from the usual sources.

“They cannot ignore the fact our government is increasing health spending by $1.3 billion this year, and education spending by $700 million,” said Fedeli.

In relation to Bill 124, Fedeli notes that the Province’s net debt has grown more than one-third of a trillion dollars.

“In 2019-20, the government is forecasting $13.3 billion in interest payments to service that debt, which is $1.5 million of interest paid every hour of every day, before a single dollar can be spent on schools, hospitals or transportation,” he said.

Fedeli stated that public sector employees would still be able to progress through salary ranges, be eligible for compensation increases, and be able to negotiate terms and conditions, including compensation.

Opinion: City should assist families and businesses whose income is stopped cold during this period
Mar 30, 2020 5:30 PM
Comments
We welcome your feedback and encourage you to share your thoughts on this story. We ask that you be respectful of others and their points of view, refrain from personal attacks and stay on topic. To learn about our commenting policies and how we moderate, please read our Community Guidelines.