The farm event is designed to reinforce social distancing, including the scavenger hunt for children, which is spread across the farm
Oct 17, 2020 7:00 AM By: Rocco Frangione 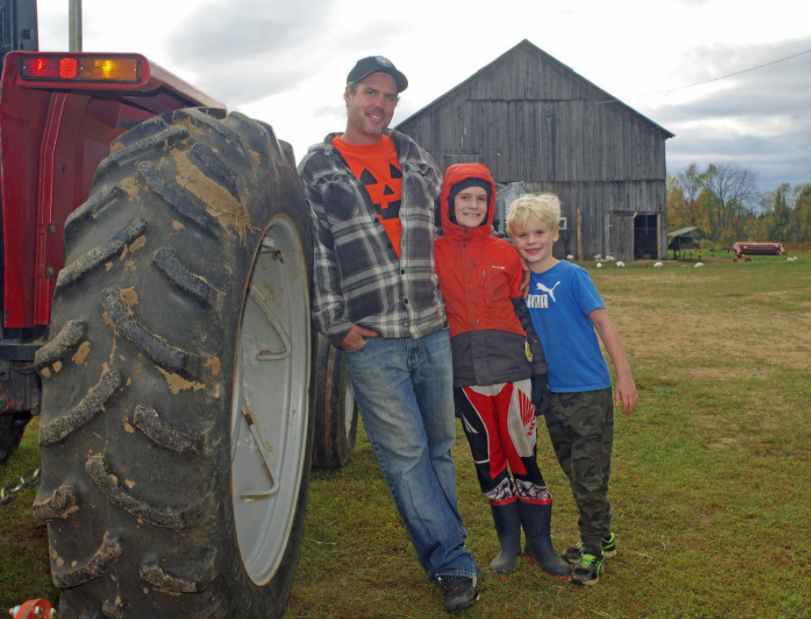 Roots and Roost in Trout Creek is holding its third-annual Pumpkin Patch Tour this Saturday. Host Greg King says his sons — Benjamin, 11, Colin, 7, and Simon, 5 — will all be on hand to answer people's questions and provide their unique perspectives on farming. Rocco Frangione Photo

Owner and organizer Greg King says he's seen growth with the event each year and had hoped to add more features this year, but COVID-19 limited that effort.

Instead what he's only been able to add for the most part is a corn maze.

King wanted to include more interactive displays, but the pandemic nixed that idea.

"These would have been hands-on experiences, but you'd never be able to sanitize the displays properly so we scrapped that idea for this season,” King explains.

Back are the farm animals. But to ensure social distancing, King has most of the animals roaming the farm this time around.

“Last year we had them in the barn and people passed each other in the doorways in close proximity,” he recalls.

“We knew that was going to be a big no-no this time.”

The farm event is designed to reinforce social distancing, including the scavenger hunt for children, which is spread across the farm.

King saw the Pumpkin Patch grow in the second season from the inaugural year and believes that may be due to a large Facebook following Roots and Roost has. And that following continues to increase in size.

Evidence of that took place on Oct. 3 when King's farm was part of the first-ever Great Pumpkin Tour in the Powassan area. He estimates that anywhere from 800 to 1,000 adults and children found their way to his farm.

That's a several-fold increase from the approximate 200 people who were at his Pumpkin Patch last year.

Because of the growth he experienced last year, King decided to add parking.

He's transformed a hay field close to the roadway which has not been performing well into more parking, and King is glad he did.

“Had we not used those additional three to four acres for cars I can't imagine where they would have parked,” he says.

“We would have been overrun and the vehicles would be parked on the road.”

When King was first preparing for the Oct. 3 Great Pumpkin Tour, he still had his Pumpkin Patch event to also prepare for so he decided to bake enough goods to cover both days.

That included having plenty of jams and preserves on hand, as well as hundreds of pumpkins.

But he wasn't prepared for the onslaught of visitors.

“We sold out during the Great Pumpkin Tour and we probably sold an entire season's worth of pumpkins that one day,” King says.

King isn't sure just how many pumpkins he may have left for Saturday because people also stop by his farm on weekdays to buy them up.

But the weekend event will have plenty of fall vegetables people may want to buy.

In addition, his staff has been busy the past several days making more baked goods.

King also is keeping raw materials on hand so that food goods can be made on the spot, plus hot drinks are available at the snack shack.

King admits he doesn't know how many people to expect on Saturday.

“We don't know if the numbers will exceed the Great Pumpkin Tour or not,” he admits. “That's because people already came out earlier in the month. There's no way to predict what will happen, but we have to prepare for a large crowd just in case.”

He adds if he has any pumpkins left over, they won't go to waste.

Rather, he'll store them in his barn where they will soon freeze. And then during the winter, he can use the pumpkins to feed his animals.

King says his three boys – Benjamin, 11, Colin, 7, and Simon, 5 – will all be on hand during the tour to answer people's questions.

“He takes people on the tour and tells them the names of the animals and he has names for them, too,” King explains. “This is different for the public because they get to see a farming perspective from the eyes of a five-year-old boy.”

Because COVID-19 has been a financial burden for some families, King is keeping admission prices the same as last year despite making some additions to the event.

Admission helps cover the expenses generated by the event, including prizes for the scavenger hunt.

Roots and Roost is located at 63 Schlosser Line in Trout Creek.

King says people without GPS need not worry about finding his place because the route to his farm will be well marked.

All out-of-town visitors have to do is take the Clark Street exit off Highway 11 to Powassan, which is Highway 534, and from there just follow the pumpkin-shaped signs King is putting up.

“It will be pretty hard to get lost if you just follow the signs,” he says.