'We’ve had some good efforts this year and didn’t get rewarded earlier in the season and I thought it was good to get those breaks tonight and have them rewarded for their hard work'
Oct 12, 2019 11:19 PM By: Matt Sookram 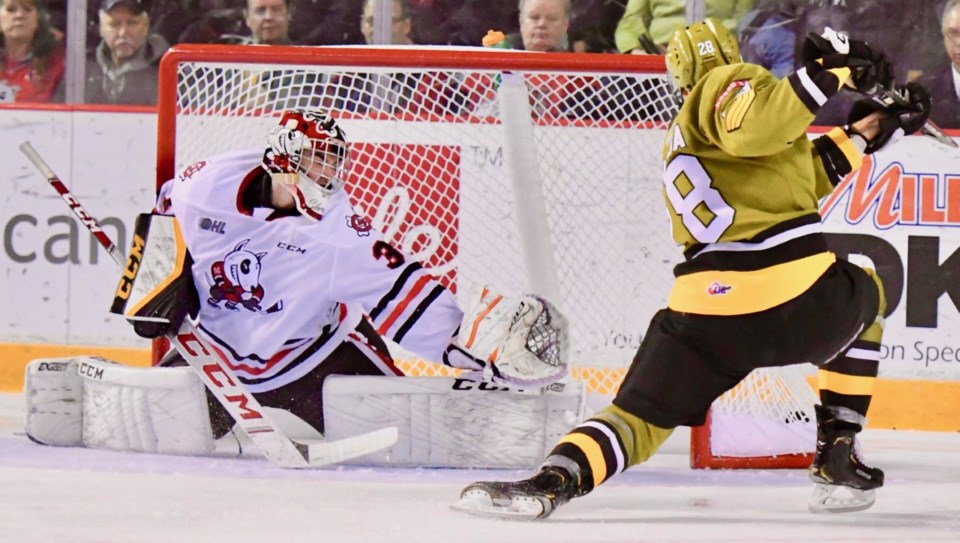 Luke Moncada takes a shot on Sbraglia in the first period against the Niagara IceDogs. Photo courtesy Sean Ryan.

The hard work from Thursday's defeat paid off in spades for the Troops as the Battalion picked up their first road win of the season in an 8-2 victory over the Niagara IceDogs. Coming off a tough 5-4 defeat at the hands of the Oshawa Generals, North Bay went into the Meridian Centre and scored three times in the first and four times in the second while Joe Vrbetic made 37 saves in net, for a complete team win. The Battalion had three different players chip in with multi-goal games to snap a four-game losing streak.

Battalion Assistant Coach Adam Dennis says, “I think we got a few more breaks tonight and it was nice to see our group get rewarded.”

“We’ve had some good efforts this year and didn’t get rewarded earlier in the season and I thought it was good to get those breaks tonight and have them rewarded for their hard work.”

The Troops got on the board just 1:09 into the game, on their first shot of the game. James Mayotte’s point shot went off the toe of Niagara Goaltender Christian Sbraglia and right onto the stick of Matthew Struthers who easily sent in the rebound for his second of the season.

The IceDogs answered back on a Philip Tomasino (7) goal at 4:53, but at 7:29, Struthers fed the puck to Mitchell Russell in the left side face-off circle and Russells shot went off Sbraglia and just inched it’s way over the goal line to regain the lead for the Troops 2-1. It was Russell’s third of the season and it came on the power play.

Near the end of the period the Niagara IceDogs were given a power play opportunity of their own, but off the ensuing face-off Kyen Sopa high sticked Nick Grima and cut him in the process, leading to four-on-four play, which Luke Moncada (3) capitalized on. Elijah Roberts lost the puck at the North Bay blue line, allowing Moncada to go all the way untouched into the IceDogs zone and beat Sbraglia one on one to put North Bay up 3-1 at 19:12. It’s the third goal Moncada has scored this season when the Battalion have only had four guys on the ice, the other two coming on short-handed situations. And that’s exactly what happened at 4:36 of the second period when Moncada got his fourth of the year. With Brad Chenier in the box, Harrison Caines pounced on a turnover and he and Moncada skated in on a two-on-one. Caines fed the pass across to Moncada who buried the puck for his second of the game.

That gave the Battalion (2-6-0-0) a five-on-five goal, a power-play goal, a short-handed goal and a four-on-four goal, leading the game 4-1 close to five minutes into the second.

“It’s playing without knowing what the score is on the clock and trying to win every shift and I think we’re getting there. We’re still a young group and we’re not perfect in that regard, but we’re going to keep working towards that.”

The IceDogs nearly found their way back into the game just a minute after the Moncada goal. A Drew Hunter point shot was tipped in by Jake Uberti (3) which came under video review as it appeared Uberti had his stick over the crossbar on the tip in.

After a lengthy review the original goal call was upheld and it was a 4-2 game at that point.

But the Battalion came back on another power play marker as Mason Primeau (3) scored at 10:02, just 18 seconds into the man advantage, getting a puck right on the edge of the crease and sliding it past Sbraglia. 22 seconds after that, Braden Henderson (1) snipped one over the shoulder of the Niagara netminder, giving North Bay a 6-2 lead.

Dennis says it was important for the Battalion not to give Niagara an opening after Uberti scored to cut the deficit in half. He says, “it was crucial, I mean, that’s hockey. It’s a game of breaks and ups and downs and how you respond to it.”

“With a young group, those can go both ways but I thought we responded well, and all game I felt we responding well to all the breaks in the game.”

The Battalion rounded out the scoring with one more goal in the second period. At 16:22, Primeau (4) just getting back onto the ice after serving a penalty got a pass from Russell deep in the Niagara zone and Primeau, on the fly, scored his second of the night. That was followed by Russell (4) getting his second of the night at 3:53 of the third period.

The Battalion scored eight goals in a game twice last season. The first coming in an 8-3 win over Kingston on October 21st and the second in an 8-5 defeat of Kitchener on December 13th. Both of those games came at Memorial Gardens.

The last time the Battalion scored eight goals as a road team was Sunday, March 6th 2016 in an 8-2 win in Flint. Mike Amadio scored his 45th and 46th goals of the season en-route to a 50 goal campaign.

North Bay now has Sunday off before hosting the Sault Ste. Marie Greyhounds on Thanksgiving Monday.