Time to get your shine on!

'One of the bigger things is kids and young adults with CF don’t look sick so when you explain there are limitations and challenges, a lot of them are internal...'
Aug 28, 2017 12:05 PM By: Ryen Veldhuis 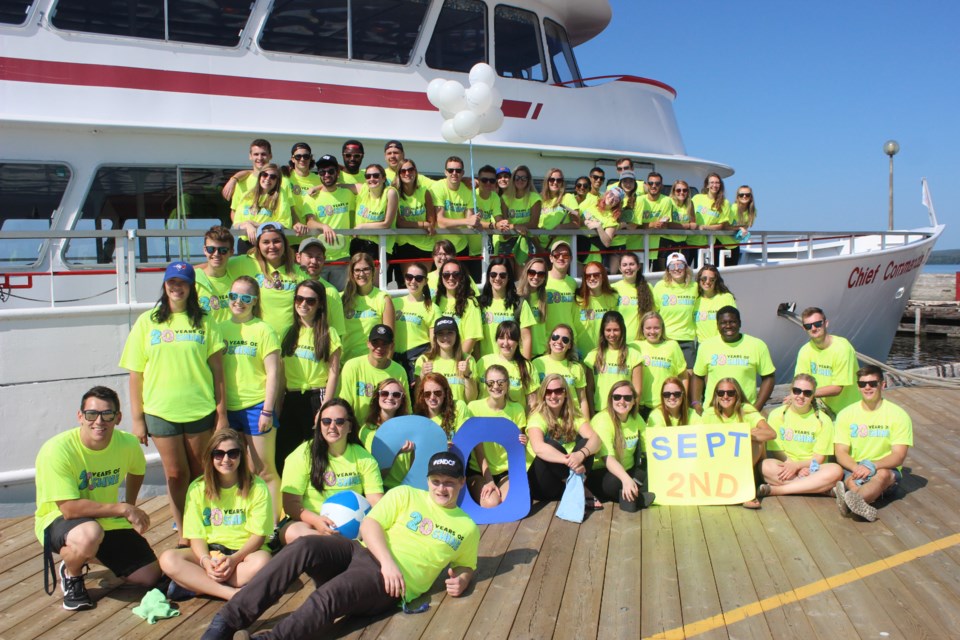 NUSU frosh leaders gathered at the Chief Commanda II to prepare for the annual Shinerama this weekend. Photo by Ryen Veldhuis.

Cystic Fibrosis (CF) is illness many families across Canada have to live with, but over the last 20 years, post-secondary institutions across the nation have been working together to shine some light on the lives of those affected.

And for Macrina Perron, mother of two who face their daily challenges of CF, the efforts of Nipissing University students are bright indeed.

“One of the bigger things is kids and young adults with CF don’t look sick so when you explain there are limitations and challenges, a lot of them are internal,” Perron, the social media manager for Cystic Fibrosis Canada's North Bay chapter said. “I’m really excited to be here and see the energy and be enthusiastic about their cause.”

Before becoming a mother of two, combating CF was still an important part of her life, having known someone in high school who faced the disease. When it came time for her to be part of Nipissing, she joined Shinerama, the annual fundraiser organized by frosh leaders.

“While I participated in the same event in post-secondary, I didn’t have the same understanding as to the why, but I do now, so that’s why it’s so important to me,” Perron said. “I went to high school with a guy with CF, so I saw first hand what it looked like so I had that perspective, but after University that perspective did change, with all of that I didn’t have the same understand that I do today.”

J’aime Brunet, NUSU VP Services, was first informed about the challenges of CF three years ago when she was a froshie and participated in her first Shinerama.

“I was in Callander and it was so much fun, getting as many people as possible to stop and get anything we could shine shined,” she said. “I didn’t know about CF before that day, but it really inspired me to become a frosh leader last year and then VP this year. I’ve been to two shine conferences since then and it’s taught me so much about CF.”

For recent frosh leaders, Sarah Goodine and Kayline Turcotte, both their second years participating in the nation-wide fundraiser, it’s just too fun of a day to pass up.

“It’s such a fun day for people to come out and help,” Goodine said, “I’m so excited to be a frosh leader this year. There were many people I saw last year that I wanted to be like, who bring people in and together. It’s such a fun day and I’d do it every year. The environment of people here is amazing, we’re all best friends and doing something like this together is just so good.”

For Turcotte, the cause is a little closer to heart, her cousin having CF.

“It’s easy to get people involved for such a good cause,” she said. “I have a cousin with CF and that’s why I have a bit of perspective and I learned so much stuff from these presentations and it’s amazing to see how far we’ve come over the last 20 years. I’m excited to spend the day with my co-leaders and froshies.”

Over the past 20 years of Shineramas, NUSU has raised over $310,000 for CF with that number set to increase after this coming weekend.

The Sept. 2 Shine locations are as follows.