Time to break up with your weed dealer say cops

"Do you trust your dealer to tell the truth about the illegal cannabis products you are buying and consuming?" asks a news release "How do you know if what you're reading on an illegal cannabis package is accurate?"

Results from THC level testing and pesticide analysis answer these questions and should sway consumers who haven't broken ties with their weed dealer to switch to legal cannabis says the release.

In 2020, the OPP had cannabis, seized from across the province, tested, and say the findings provide insight into the deceptive and unsafe illegal cannabis products being sold on the illicit market.

Based on test results from the National Research Council of Canada (NRC), the below graph illustrates the varied levels of delta-9-tetrahydrocannabinol (THC) content in the seized illegal cannabis vape samples tested, ranging from less than one per cent to almost 80 per cent.

While the majority of the illegal samples did not advertise THC levels on the packaging, the six samples that claimed to have THC content greater than 90 per cent actually measured values from 45 to 60 per cent. By contrast, another study demonstrated that legal cannabis vape liquids from the Ontario Cannabis Store (OCS) can be consistently produced with greater than 80 per cent THC content.

"In addition to the greater risk of harmful fillers and contaminants with low THC content, this research shows your weed dealer may not be giving you the potency you expect," says the OPP. 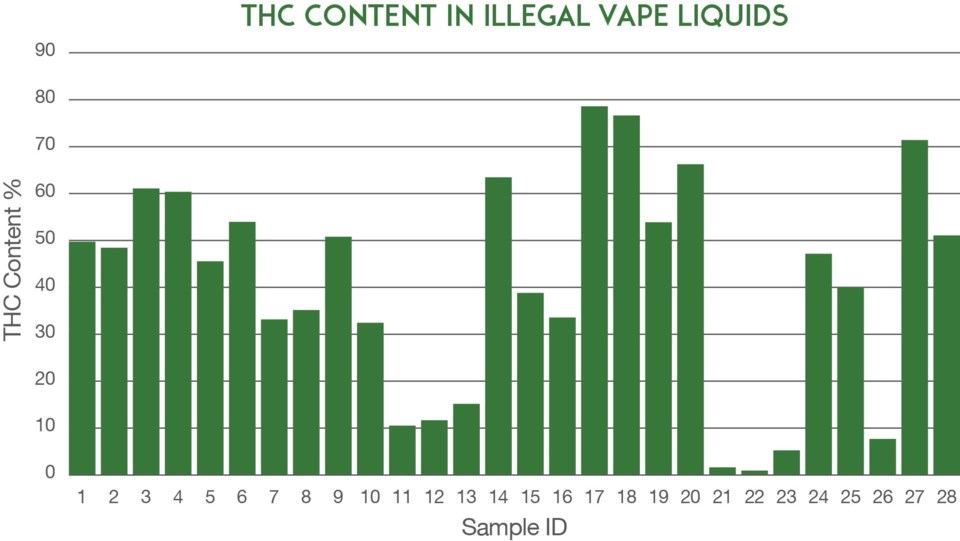 The NRC also performed pesticide analysis using its validated testing method for 96 pesticides. These pesticides are specified in Health Canada's Mandatory Cannabis Testing for Pesticide Active Ingredients. High levels of pesticides were detected in all samples with myclobutanil being the most prominent, ranging from 0.3 parts-per-million (ppm) to over 500 ppm - several thousand times higher than the detection limits set by Health Canada. Myclobutanil can generate hydrogen cyanide when heated, a dangerous toxic compound that is linked to various cardiovascular, respiratory, and neurological illnesses.

In addition to vape liquids, several dried cannabis samples, seized by the OPP at sites operating illegally under the Health Canada personal production of cannabis for medical purposes regime, were also tested for pesticides.

Myclobutanil was again present in all of the samples with concentrations greater than the Health Canada limit. Other pesticides were also detected such as metalaxyl, chlorpyrfos, and pyridaben, in some cases at levels 100 times higher than listed limits. High levels of pesticide residue present significant health complications for cannabis consumers says the OPP.

These pesticides are not only harmful to consumers, but they could also pose a risk to the surrounding communities.

The Ministry of the Environment, Conservation and Parks (MECP) enforces Ontario's environmental laws and partners with the OPP to help combat hazardous impacts to the environment at illegal cannabis production operations. During one inspection of an OPP-led Provincial Joint Forces Cannabis Enforcement Team's (PJFCET) takedown in November 2020, MECP found large open holding tanks filled with liquid fertilizer connected to a storm water pond that ultimately discharged into a municipal drain. Approximately 75,000 containers of soil were found at the location, and through a small sample collection, the presence of several hazardous pesticides that require special management were identified.

"It's time to know what you're purchasing and break up with your weed dealer - for your own health and safety," adds the release.

"The OPP remains committed to unmasking the threats inherent with criminal cannabis. We will continue to work with our various partners to expose the health and public safety risks related to the illegal market. The test results are clear evidence that consumers don't know what they're getting when they purchase illegal cannabis products and how important it is to know the facts," says Rachel Huggins, OPP Deputy Director.