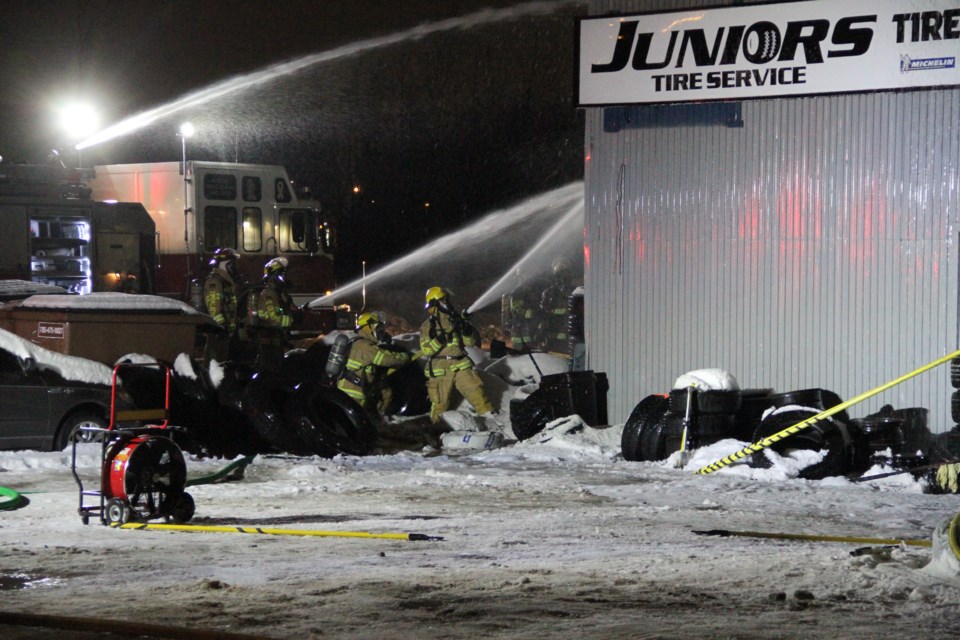 At just after 7 p.m. on Friday, fire crews from all three fire stations responded to a report of a structure fire at Junior’s Tire located at 1524 Cholette Street.

Fire crews encountered significant fire and very heavy black smoke emanating from the building on arrival but were able to confirm that there was nobody in the building at the time of the fire.

"Fire crews worked tirelessly trying to stop the fire but by the time the fire was extinguished the building had suffered significant damage," said Saunders. "Three firefighters suffered minor injuries battling the fire but all are expected to be fine. The owner of the business, Dave Bogensberger, was on scene and thanked the responding firefighters for their efforts and hard work."

Saunders says in terms of a battling a fire that involves tires, there are additional challenges.

"The fire releases a thick dark smoke that contains cyanide, carbon monoxide, and sulfur dioxide. As burning tires are heated by fire they are very difficult to extinguish as they continue to smolder and due to the intense heat generated they are very difficult to cool. Firefighters were forced to use a foam application on burning tires which has the effect of smothering the tire fire by depriving the fire of the oxygen necessary for the fire to continue to burn. Our firefighters diligently use their self-contained breathing apparatus (SCBA) to ensure their safety from the noxious gasses released by burning tires.ause of the fire is suspected to be electrical in nature but the investigation is ongoing.

"North Bay Firefighters employed an aggressive firefighting tactic called positive pressure attack  This tactic allows our firefighters to be faster and more effective extinguishing fires. It is a fairly new tactic that involves using large fans to remove the products of combustion from a building.

"This tactic delivers two significant benefits. First, it improves the atmosphere inside the structure which improves the chances of survival for anyone that is trapped inside.  Second, the tactic allows firefighters to more quickly advance to the seat of the fire and get it under control. North Bay is one of the most progressive fire departments in the province in embracing and successfully utilizing positive pressure attack to manage fire incidents."