The winery in winter

A recent article in the Toronto Star described how vineyards in Niagara are using wind turbines to combat the cold weather. Specifically, it explained how Henry of Pelham is using high-tech sensors to pinpoint exactly where and when to turn on the turbines which can cost hundreds of dollars an hour to run.

The turbines can raise the temperatures at vineyard level by four or five degrees, explained viticulturist Matthew Speck, and this can be the difference between grape buds dying or surviving.

A drive over the Mackinac Bridge in late December clearly illustrated how “Lake Effect” can make the use of turbines significant. Across the Upper Peninsula of Michigan that day, the temperatures hovered around -23 degrees Celsius; however as we drove across the bridge over the Straits of Mackinac which joins Lake Huron to Lake Michigan, you could see the mists rising off the waters below.

At mid-span, 200 feet above the water, the temperature had risen to -13 degrees, as the waters below gave up their heat to the air above. 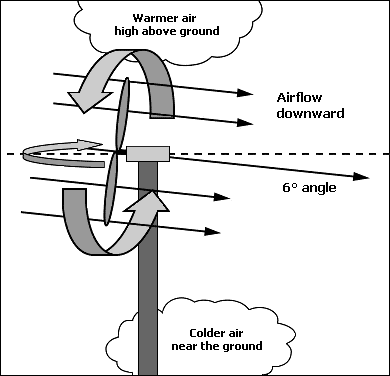 Ontario Ministry of Agriculture image
With Lakes Ontario and Erie both impacting on Niagara, you can begin to understand how turbines angled so as to pull down the warm air that had risen over the lakes, could truly be “life-saving” technology for the vines.

With this in mind, I began to wonder, “What else is going on in the wineries at this time of year.”

Depending on the size of the winery, it may vary, but in every case the results will be crucial with respect to the quality of wine we can expect to enjoy as a result of the 2017 harvest.

Outside in the vineyards, wineries are beginning to prune.  Marc Pistor of Fogolar explains, “At this time of year, one of the most important vineyard operations is taking place, the removal of excess vine material in order to ensure the balanced and desired growth of the vine in the new growing season. This step can have a huge impact on the health of the vineyards and the quality of the grapes and wines produced. There are many variables to consider when pruning, including: the history of the vineyard and its climate, soil and drainage; the training system, grape variety and the style of wine to be produced; and most importantly, the individual vine.

Pruning each vine based on its appearance and growth will yield the best results for the upcoming season and beyond. The skill and knowledge of the viticulturist and his or her team is very important in helping vineyards flourish, giving wineries and winemakers the best chance to craft quality wines.”

Cave Spring Cellars winemaker, Angelo Pavan explained that in pruning, they start with the cold-hardy varietals such as Riesling and Gamay, and prune the more tender varietals last.

Pruning can go on, J-L Groux of Stratus informed me, right up into April and May. At the same time, some old, less-productive or damaged vines may be replaced.

J-L also indicated that this time of year is when white wines will under-go “cold stabilization”. In warmer climates, wineries would have to resort to refrigerated tanks to carry out this process, but in Niagara, given the right conditions, this can be accomplished by moving the wine outside. This causes the tartaric acid crystals that form when wine is chilled to precipitate out of the wine before bottling.

Left “un-stabilized”, these crystals or “white diamonds” would otherwise form when you put your white wine to chill before serving, and you could find them either on the bottom of the cork…or the bottom of your glass. 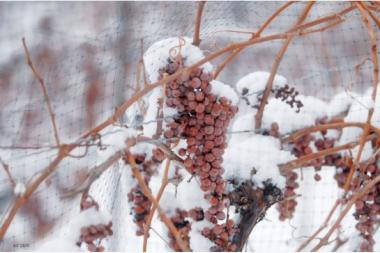 Caption
They are essentially harmless, but some drinkers find them “un-aesthetic”.  Cold stabilization makes them a non-issue for both wineries and the consumers.

Marc Pistor confirmed what others were saying: “the work in the winter months is both exciting and nerve-racking for winemakers as they taste and blend barrels, batches and lots. The big reds and Chards from the previous vintage as well as aromatic whites from the most recent vintage are being prepared for bottling over the coming months. Depending on the cellar and the wine, this can be a very long process. Many blending trials - where wine is sampled from its barrel or tank and blended with other wines in the lab - are needed to find the best possible combination.

After tasting and discussing and blending, then blending and tasting some more, the winemaker has to commit to a final blend. After this is confirmed, the wines are physically blended in the cellar and the process of stabilizing the wine begins. Stabilization involves different steps for different wines, but essentially it is the process that prevents any unwanted change once the wine is in the bottle.”

Outside of harvest, January is the busiest month of the year at Cave Spring Cellars. It involves tank-tasting of Riesling as the fine-tuning for the top CSV tier is determined, and the lighter, aromatic wines from the 2017 harvest, such as Pinot Gris, Pinot Grigio and Rosés are readied for bottling.

At this time, they are starting to assemble the 2016 reds, selecting the best barrels for wines that spend 16 months in barrel prior to bottling, such as the Estate Dolomite Cabernet Franc. They can’t fall behind now, as they will be bottling right through to the next harvest. Other tasks include the battinage, or stirring of the lees in the barrels, and monitoring how wines are progressing.

The top Rieslings, aging now on their lees, won’t be bottled until summer, but Angelo is figuring out how to assemble other tiers of wine.   Important decisions, because once you blend tanks together, you can’t take them apart.

Cave Springs is aiming for more lees contact for bigger wines (lees are the sediment that the wine is throwing, but the wine can continue to extract important flavour elements as the process continues.)

Stratus will bottle 6 to 7,000 cases in March which is about half their total for the year  It begins its assemblage tastings in January, a process which involves “blind-tasting” a multitude of potential blends before determining the exact make-up of the next edition of the Stratus Red and Stratus White, among others. At the same time, with some of the whites, Malo-lactic fermentation is under way, as the sharper, crisp malic acids are converted to the softer, ‘milk-like’ lactic acids.

Stratus has a “Green Committee” which at this time of year puts on its thinking caps to consider the next steps that they want to undertake for the sake of the environment.

While you would think that the crush by now would be completed, at the Foreign Affair Winery, they will just begin in the next few weeks to crush the appassimento grapes that have been drying out since harvest, just as is done for the Veneto’s great Amarone. Ed Haddon, former marketing guru at Lailey vineyards, told me that 2017 is a better vintage than expected. The year had a cool, late and wet start, resulting in the need to drop fruit and really manage the foliage to maximize proper exposure of the grapes; however, the glorious September and October turned the year around, and people are optimistic about the wines that are being made.

Derek Barnett, winemaker at Lailey up until its sale to foreign interests, has now established his own Meldville label and is happy with the progress. He has just finished getting the 2017 reds into barrel and is now undertaking tasting trials with the lighter, aromatic whites such as Sauvignon Blanc and Pinot Grigio before bottling.

Derek says that the 2017 whites are nicely balanced with good aromatics, just what he would expect from cooler years. With the reds, such as Cabernet Franc, Gamay and Merlot, Derek believes we have a “Sleeper Vintage” thanks to the two and a half months of wonderful ripening weather, and he is happy to be nurturing these wines along.

At this time of year, bears and groundhogs may be slumbering, and the snowbirds may all have headed south, but winemakers, it is clear, are far too busy to put up their feet and snooze!

Nugan Estate Third Generation Chardonnay 2016, $12.95 is a very good Australian wine for the price, with just a whisper of sweetness to the tropical flavours. While not huge, it’s persistent and delivers well above its price.

The Bend In The River Riesling, $10.95, is a decent sipper, but a bit light in acidity for a Riesling. Easy going and fairly priced, it could make a good event or house wine, and that might be all one could reasonably expect.

Two Oceans Shiraz 2016, $9.95, is hard to beat. This South African red has medium weight with spicy mild tannins accompanying red berry fruit. The length is good, and the wine would pair well with an Italian sausage panini, no doubt about it.

Foral Douro 2015, $8.95 from Alianca, is produced from traditional Portuguese varietals – Tinta Roriz, Touriga Franca, and Tinta Barroca. It is juicy, lively and mid-weight with a smooth silky texture and a mildly tannic smack on the finish. Break out the hard cheeses and chorizo!

Middle-Earth Sauvignon Blanc 2016, $17.95 will be perfect for you if you are an Orc or a Hobbit or some other Tolkien creature… or if you only drink New Zealand.  “juicy and vibrant…delivers excellent fruit power and plenty of tasty flavours.” –wineorbit.co.nz – 93. Wine Align’s John Szabo writes, “Lovely, smoky minerality. I’d almost think this was being sold at 50 per cent off the regular price.” – 90

Domaine De La Fruitière Vignes Blanches 2015, $16.95, from the Loire, is an intriguing blend of Sauvignon Blanc and Chardonnay –crisp and herbal, with a creamier backnote – Wine Enthusiast – 88.

Cliffhanger Pinot Grigio 2016, $15.95 from the north of Italy was called excellent and highly recommended by the Ultimate Wine Challenge for its apple and honeysuckle flavour and lean minerality – 90

Novellum Chardonnay 2016, $17.95 from France’s Roussillon carries a “Robert Parker 92” for its white peach and spice, its depth, and it layered texture and length. 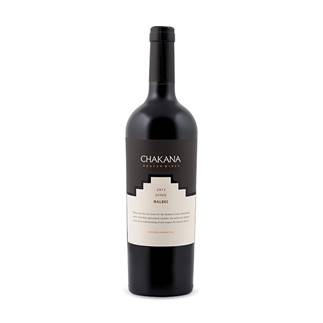 Mascota Vineyards Gran Mascota Malbec 2014, $19.95, is one of the Vintages “Wines of the Month.” Praised by “Parker” as a powerful, expressive Malbec, It is also described by James Suckling as “medium to full body with blackberry, spice, and walnut character.” – 93.

Ca’Linverno Veronese Rosso 2013, $23.95 from the Veneto sounds like an Amarone at a Ripasso price. The grapes dried on the vine. Raisin, prune, and rum-cake, mocha and spice are all identified by robertparker.com, which comments on “very attractive thickness and roundness” as well as significant residual sugar at the end. – 91.

Last February, there was quite a demand for the Valentine’s wine tasting at Stokely Creek Lodge, the cross-country resort about 40 kilometers north of Sault Ste. Marie at Goulais River.

This year, you have two opportunities to participate, with a tasting being held on each of Saturday, Feb. 10 and Saturday, Feb. 17. Six wines will be poured at each, accompanied by hors d’oeuvres, and many of the wines will come from the Stratus Vineyards portfolio from Niagara-on-the-Lake. These include a terrific Prosecco from Sorrelle Bronca, a wine sourced by Cru Merchants, the importing arm of Stratus, as well as the Charles Baker Picone Vineyard Riesling.

Cost for the tastings is $50. Join us for dinner following and the price is $80 for both. Better yet, if you choose to book in for the night, then the price for the tasting is $35, with your dinner and breakfast included in the price of your accommodation.

As the 17th falls in the President’s holiday weekend for the United States, the Lodge is already fully booked for that day, but you can still attend the tasting that evening, depending on space.

For further information, or to book, please contact Stokely Creek Lodge at 705-649-3421, or events@stokelycreek.com.