'What struck me was the depth of their understanding and empathy that came through in their works of art'
0
Apr 24, 2018 5:30 PM By: Jeff Turl 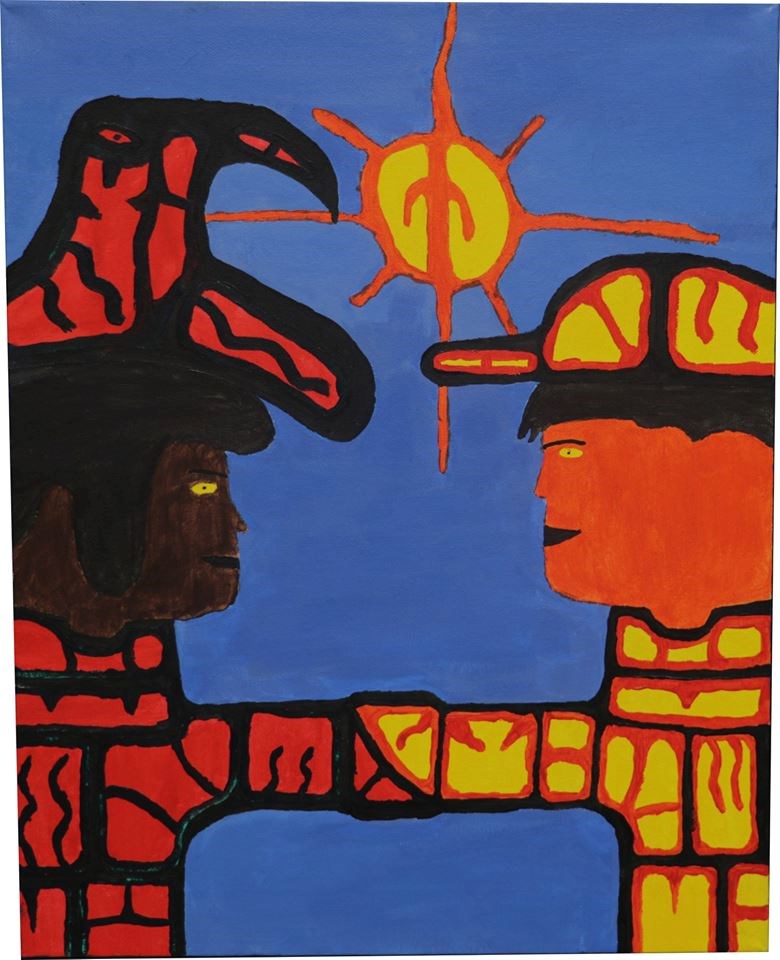 This painting represents the Truth and Reconciliation commission put together by the Canadian government in order to work things out with the Indigenous peoples. Since the white man is painted in the traditional Woodlands style it shows that the government accepts the Indigenous culture and the two people shaking hands shows their willingness to sort things out, so our peoples can continue living side by side. courtesy Chippewa secondary School.

This educational initiative, visiting local secondary schools, is presented by the Friends of Simon Wiesenthal Center for Holocaust Studies, with the assistance of the North Bay Police Service.

It's a fully self-contained mobile classroom designed to inspire and empower students to raise their voices and take action against hate to help make the world a better place.

“We enjoyed working with the Tour for Humanity organizers to bring this rich educational experience to high school students last year,” said Inspector Kirk Kelusky, North Bay Police Service. “Teachers and students alike informed us that they were very impressed with the presentation and found it and the discussions that followed valuable. We are pleased to work in partnership with school officials, who were eager to present this to their students again this year.”

A variety of issues and topics are explored on the Tour for Humanity bus including racism, prejudice, the Holocaust, universal genocide, real-world heroes, the Canadian residential school system, and the internment of Japanese Canadians during the Second World War. Current issues of cyberbullying and examples of intolerance are also discussed.

This year Chippewa Secondary School Visual Arts students under the direction of Angela Evans have completed works of art that demonstrate both their learning and their hopes for a better Canada.  The students studied examples of art and social protest from masters such as Picasso and his famous work Guernica.

They learned about the power that art has to challenge society and affect change, focusing on the use of art to challenge social injustices in Canada.  Subjects such as; residential schools, missing and murdered Indigenous women, racism, and xenophobia to name a few.

"We had time for students to think about what topics were of interest to them, what touched them or made them feel the need to say something," Evans told CKAT.

Their works can be seen on the Chippewa Facebook page along with descriptions on the works meaning and content.  “What struck me was the depth of their understanding and empathy that came through in their works of art” said Evans. “If this class is any indication of the next generation as a whole, then I think it is safe to say that Canada is to become a kinder nation with an intolerance for hate.  Our future looks bright.”

Emergency order allows first responders to access COVID-19 positive status information
Apr 6, 2020 3:13 PM
Comments
We welcome your feedback and encourage you to share your thoughts on this story. We ask that you be respectful of others and their points of view, refrain from personal attacks and stay on topic. To learn about our commenting policies and how we moderate, please read our Community Guidelines.