'If the school bus that my brother Adam was getting off of would have had an amber eight lamp system, we might have seen who he would have grown up to be.'
Mar 5, 2021 5:00 PM By: BayToday Staff 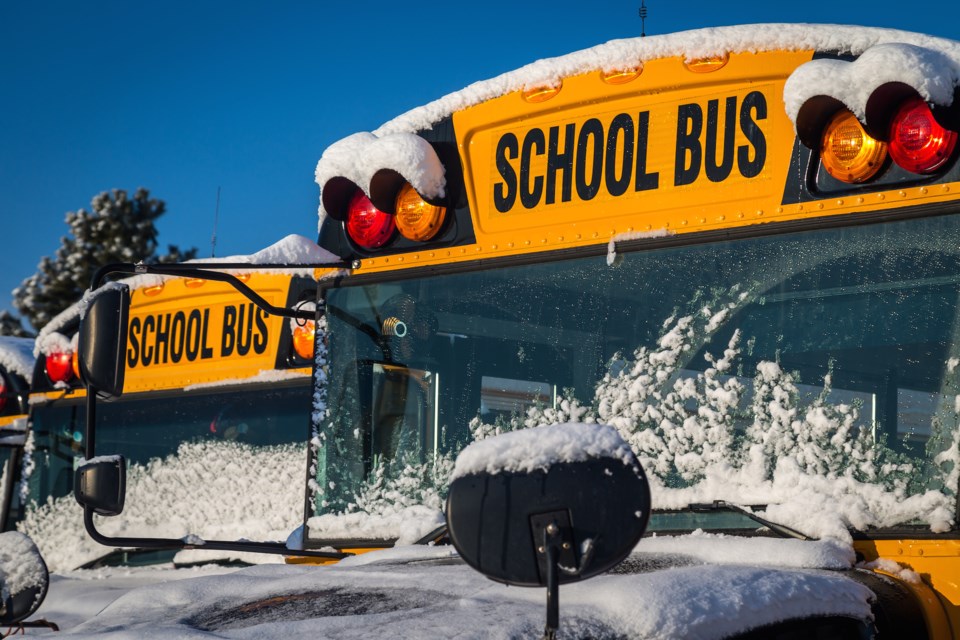 Adopting the amber-red warning system would see the two inner red overhead signals on both the front and back of a school bus in Ontario replaced with amber-coloured signals. Stock image.

Not only has the Let's Remember Adam campaign and its chairman, Mattawa's Pierre Ranger advocated for a change to the safer amber-red overhead warning lamps system on Ontario school buses, but so has an MPP with ties to the North Bay area.

Kitchener–Conestoga MPP Mike Harris' Private Member’s Bill, Bill 246 the Safer School Buses Act, 2021, has passed second reading with all-party support. The bill proposes to amend Section 175 of the Highway Traffic Act to require school buses manufactured after 2005 to be equipped with the amber-red dual lamp warning system by September 2022. Bill 246 has been referred to the Standing Committee on Justice Policy. Before it becomes law, it must be debated for a second time and pass third reading.

Harris is the son of former Premier and MPP for Nipissing Mike Harris.

"Ontario is one step closer to getting on board with the rest of North America and adopting the safer amber-red warning system for our school buses," said Harris. "Being a father of five, the safety of my kids is always at the top of my mind and I am pleased that my colleagues have supported the second reading passage of my bill which would make the buses students take everyday even safer. This change is backed by law enforcement, safety advocates, and school bus operators and is long overdue in Ontario."

Adopting the amber-red warning system would see the two inner red overhead signals on both the front and back of a school bus in Ontario replaced with amber-coloured signals. The school bus driver would activate the amber signals when approaching a stop to give drivers clear advanced notice that they are slowing down to let a student on or off the bus.

Ranger, whose brother Adam was struck by a passing vehicle and killed 20 years ago while crossing the road in front of his school bus has also played an important role in another improvement to school bus safety. The Safer School Buses Act, 2021 builds on work already undertaken by the province to improve school bus safety. In 2019, regulatory changes were made by the MTO to allow for school bus stop arm camera footage to be used to prosecute drivers who illegally pass stopped school buses, a measure Let's Remember Adam supports.

"Bill 246 and the Amber Eight Lamp System put child safety first, where it should always be. Children are our future and should be protected at all costs," said Ranger. "Maybe on February 11, 2000 if the school bus that my brother Adam was getting off of would have had an amber eight lamp system, we might have seen who he would have grown up to be. The time for real change is now and you can make it happen! Please don't wait until it's too late."

The Ministry of Transportation requires all school buses purchased in Ontario after January 1, 2005 to be manufactured with eight overhead signal lights. For most bus models, this change would only require a replacement of the lens cap. The amber-red system is used by every other province in Canada and every state in the United States, with Newfoundland (2014) and Wisconsin (2016) being the latest jurisdictions to switch.

In a study published in 2002, Transport Canada recommended all provinces use the amber-red system after findings showed the amber warning lights were 11 per cent more effective than systems with all-red overhead lights in reducing the speed of approaching vehicles.

"School Bus Ontario is pleased this bill is moving forward," said its Executive Director Nancy Daigneault. "We are encouraging all parties to see the value in this bill which, if passed, will greatly increase safety for students on school buses. Thanks again to MPP Mike Harris for taking the initiative."