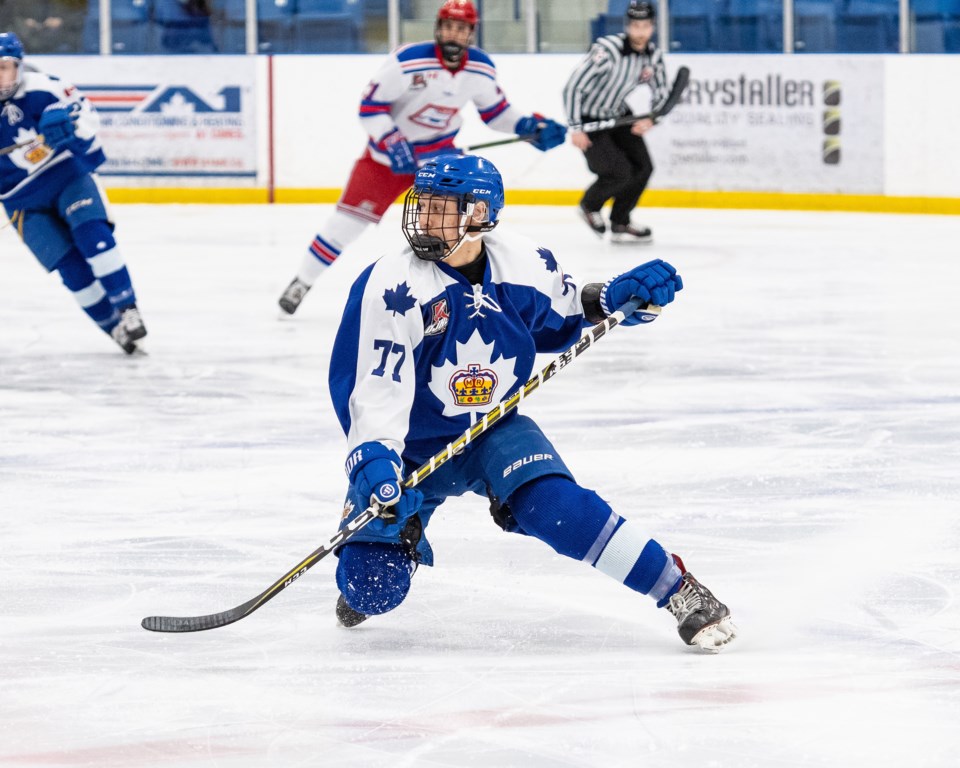 Patience was a virtue this weekend for North Bay’s Nick Davis.

The 19-year-old North Bay native finished off a successful first season of junior ‘A’ hockey this season with the Markham Royals of the Ontario Junior ‘A’ Hockey League (OJHL).

Davis knew he had to make an impression but it took some time.

“At the start I was on the fourth line and I was not playing much but me and the coach did not really know each other as he signed me just before the season started so he did not know who I was and how I was as a player,” said Davis.

“But as I started to get my confidence back, I started to play a bit more and he trusted me, just started with me on the second power play here and there, then all of a sudden he switched me to the first power play and I never looked back from there.”

The former North Bay AAA Trappers sniper finished with 22 goals along with 19 assists for 41 points in 49 games with the Royals in 2018-19.  He also racked up another 5 goals and 5 assists for the Royals, who were eliminated in the OJHL Northwest conference championship by the Oakville Blades.

Royals head coach Mike Galati says Davis was able to play within their structure which was key.

“His speed with the puck is second to none, he seems sometimes to skate faster with the puck than without it, and his release, the puck seems to find him around the net, he has got one of the best releases I have seen in this league,” said Galati.

“So those two things, he works, plus he is a real good kid.”

Davis did face a lot of new faces this past season but did have some success playing against a former teammate and adversary in the north.

He realized during a game against the Toronto Jr. Canadians, that Matty Mayhew, a goalie who played with him in spring hockey and was a rival in Nickel City, was in goal for the other team.

Davis had Mayhew’s number in the past, and ended the game scoring three times against his northern rival.

“We talked after the game and we laughed about it and he told me I’ve always found a way to score on him,” recalled Davis.

“That was definitely fun to do that especially against Matty, he is a good guy and I have always had more respect for him, it just made it a little bit sweeter.”

Davis was a U18 draft pick of the North Bay Battalion two seasons ago, but he has now been released from the Battalion protected list. The 5'9" forward is now focussing on trying to find an opportunity in NCAA Division I hockey.

“I want to go the NCAA route and talked to some schools that had some interest so hopefully that will increase next year,” said Davis.

Davis hopes to join a handful of recent North Bay trained players who have moved on to NCAA Division I hockey include goaltenders Colton Point and Nate McDonald, along with defenceman Ben Brunette, who committed to UMass-Lowell this spring.

Galati believes the opportunity for Davis to jump to that level is there.

“He had a big year with us and I think he is a D I hockey player,” said Galati.

“He had a lot of interest especially in the playoffs and he scored some real big goals for us.”