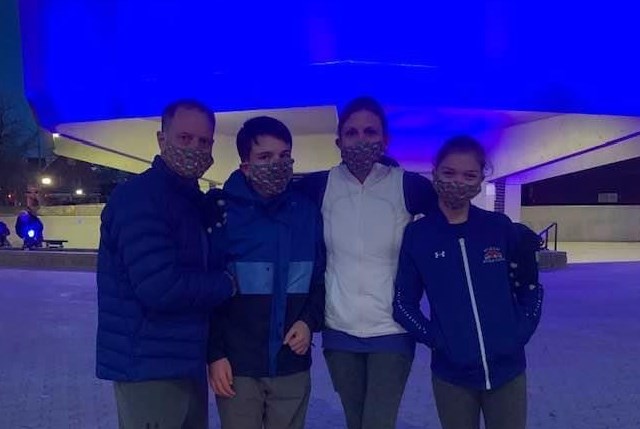 Mark Lyons admits that it really bothered him that he was unable to "Light it up Blue" in North Bay's city hall last year due to the COVID-19 pandemic.

This year, there was not a large gathering but City Hall was again lit up in Blue to help celebrate World Autism Day last Friday and create awareness for what has become an amazing local fundraiser which supports local kids with autism and special needs.

"I went there with my wife," said Lyons.

"There are people from my past who are there but you can't gather with. It is overwhelming when you see it. It makes me think of six years ago making just a little decision just to try and help special needs kids."

And help Mark Lyons has. Last year, primarily through his sale of blue socks campaign he was able to raise $4,500 to help pay for a piece of equipment at One Kids Place in North Bay.

See related: 'They have embraced this in the community'

"For a school to raise that much in one day, and that just shows how people step up for special needs individuals in this community," said Lyons.

This year, Lyons decided the money would go toward weighted blankets and vests for children.  The weighted items create a calming effect and even help reduce anxiety.

"People have even bought the weighted blankets and dropped them off," said Lyons.

He is also waiting for his pre-ordered blue socks from Skaters North to come in as he is excited about making those deliveries.

In fact, the support has been so good, that Lyons believes the money raised this year will even allow them to help purchase some interactive playground equipment for the backyard at One Kids Place.

"It is outstanding to have so many people that want to reach out and want to help," said Lyons.

"I can't thank those people enough."

Anyone interested in purchasing the socks can call Mark at (705) 471-5852 or email marklyons69@hotmail.com.