“We have to take that as a learning experience. We have to battle hard until the end and I know the score was a bit much, but we have to find a way to bounce back from it.”
Sep 27, 2019 11:10 PM By: Matt Sookram 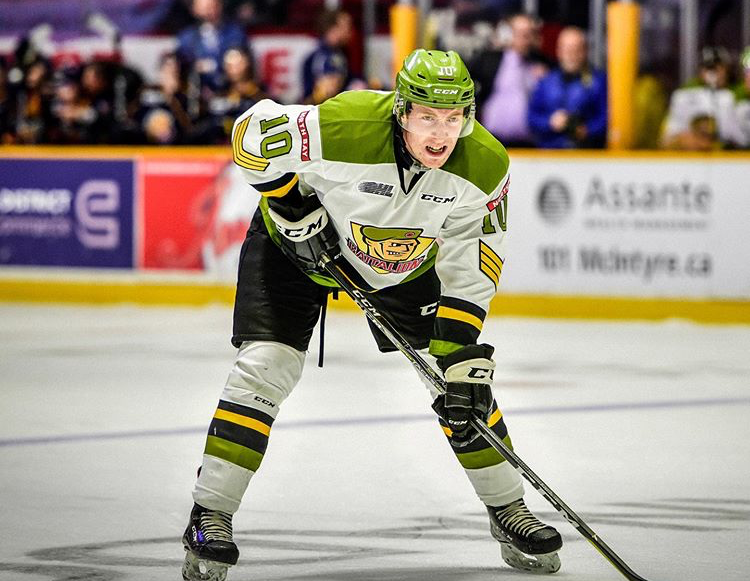 The Sudbury Community Arena was not a great place for the North Bay Battalion last season. The Troops went 1-3-0-0 in the four games there against the Wolves, getting outscored 17-10 over the course of those meetings. The trend continued into the first game of this season as the Battalion were defeated 11-3 on Friday night.

One night after an uplifting 3-2 overtime win over the Kitchener Rangers at home, the Troops marched down Highway 17 for the first of eight meetings against the Wolves. The first 20 minutes didn’t look too bad. They got out of the period down by a goal, but Brandon Coe’s first of the season at 5:29 opened the scoring and had North Bay ahead.

“Chenier just gave me the puck on the wing, and I used my speed, took it to the net and finished back hand,” says Coe after the game.

“It’s exciting to get my first one, hopefully I can keep it going.”

The Battalion will need him to keep it going if they hope to be successful this year. The third year forward also helped set up the second Battalion goal at 4:18 of the third period. The only problem was, when Matthew Struthers (1) scored on the power play, it only got the Battalion to within seven goals at that point, with the Wolves scoring nine straight between the first and second periods.

After Coe opened the scoring, the Battalion were awarded a power play, but it was the Wolves who used the advantage of little bit of extra ice as Quinton Byfield forced a turnover and took off down the ice, setting up Nolan Hutcheson for the short handed goal at 11:07.

The teams exchanged chances for the duration of the period and they looked to be headed to the locker rooms tied at 1-1, but with just six seconds left, David Levin received a pass off the half boards from Macauley Carson and teed one up. It was a bullet of a shot that found it’s way past Christian Cicigoi, putting the home side up 2-1.

It was a quick flurry of goals that followed in the second. Owen Gilhula started it all just 29 seconds in. Blake Murray was next at 1:04, Ethan Larmand added another at 2:38.

Coe says, “We have to take that as a learning experience.”

“We have to battle hard until the end and I know the score was a bit much, but we have to find a way to bounce back from it.”

Gilhula added another, still in the second at 6:22 on the power play and Isaak Phillips, Chase Stillman and Giordano Biondi all added their name to the goal list before the period was done.

The Wolves added two more in the third to round out their scoring for the evening with Macauley Carson and Jack Thompson getting goals at 14:11 and 18:03 respectively.

It was the worst loss on the road since a 12-2 defeat in January of 2016 against the Colts in Barrie.

Cicigoi was pulled after allowing five goals on 14 shots, while Joe Vrbetic was 10/14 in relief. Cicigoi was back in net to start the third.

Former Battalion goaltender, Christian Purboo made 27 saves on 30 shots, getting the win in net for the Wolves.

The third goal past Purboo was scored by Paul Christopoulos, giving him his first career OHL goal, joining his twin brother Alex who got his first last weekend in Sault Ste. Marie.

“When I scored it, we were already down by a lot of goals, but I’m still happy that I got my first goal in the OHL but at the same time, we can’t really celebrate.”

That is an unfortunate by-product of the result of this game as every kid dreams of getting their first one in a big moment. However, the rookie Christopoulos, showed tremendous maturity in just giving a few high fives before heading to the bench, knowing that he’s got the first one out of the way and the expectation that there will be more to come. With the shot he had, a rip from the blue line going over the shoulder of Purboo, he packs a lot of punch from the back end that the Troops should look to take advantage of as the season goes on.
Christopoulos says, “I’d say I have a pretty good hard shot, I worked on my accuracy over the summer, and I feel like it keeps getting stronger.”

With the Don Mills Flyers last season, he amassed 22 goals and 67 points, and with a developing slap shot, it’s not hard to see why.

The Battalion as a unit will look to continue to develop as well as they can’t let the hard work from the first three games of the year go to waste because of a bad Friday night in Sudbury.