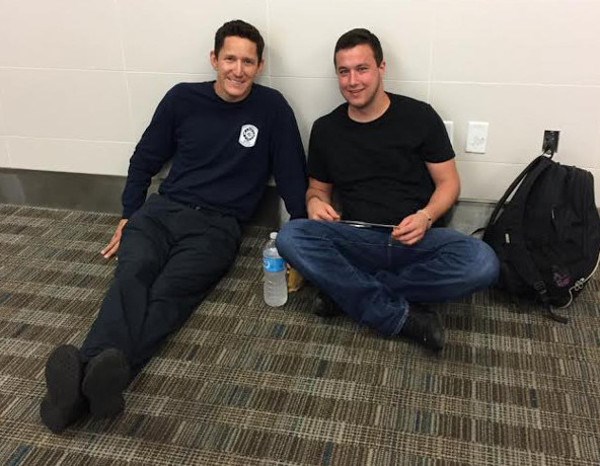 Dusty Rousseau would be reluctant to accept the title of ‘Good Samaritan’ or ‘hero,’ but either one of those terms is appropriate.

Rousseau, 36, born in Sault Ste. Marie and raised in Wawa, now resides in Fort Lauderdale, Florida, where he lives with his wife and works as a firefighter and paramedic.

Just before Christmas, Rousseau was called to assist police with a young man who had passed out on a city sidewalk.

“When they (police) woke him up, he was laying on the streets in Fort Lauderdale.  Fort Lauderdale sounds beautiful, with Florida and sandy beaches, but where I found him was not the best place,” Rousseau told SooToday.

He had been sober for a few months, but suffered a relapse after leaving rehab.

A police officer told the man to get on his feet.

“The first words out of his mouth were ‘yes sir,’” Rousseau recalled.

“That’s where the emotion came for me. I felt bad for the kid right away, he said ‘yes sir,’ he’s not a thug.”

“I said ‘I’ll take him to hospital, officer. I’ll take it from here.’”

“I talked to him for a while, and he’s a good kid who struggled with an addiction, he was dressed well, he spoke well, he was respectful, he had played hockey and grew up in a small town like I did, I thought ‘I’ve got to help this kid,’” Rousseau said.

Rousseau, well-known and respected by hospital staff in Fort Lauderdale for his work as a paramedic, urged medical staff to keep the man safe in hospital until his 12-hour shift ended.

Rousseau, still in uniform, came back for Ryan after he finished work.

Before he had left the hospital, Rousseau gathered as many details as possible regarding Ryan and his circumstances.

Rousseau was able to reach the man’s father by phone at his home in Wisconsin.

Ryan’s father, who had been going through some tough financial times due to loss of employment, could not afford to get to his son or pay to bring him home.

“I talked to his Dad on the phone, and his Dad wanted nothing more than to get him home for Christmas,” Rousseau said.

Rousseau paid, out of his own pocket, for a plane ticket for Ryan in order to get him home to his father.

At Fort Lauderdale International Airport, Rousseau stayed at Ryan’s side while he waited for a flight to Wisconsin.

“I was bawling my eyes out…I was just so touched” said Dalyce Rutland, Rousseau’s mother, speaking to SooToday after seeing the photograph of Rousseau with Ryan at the airport.

“I’m so happy and proud…you just don’t see people helping other people like that, especially in a major city like that,” Rutland said.

Ryan contacted Rousseau upon his arrival in Wisconsin, saying that to be home with his father, intending to get his life back on track, was an incredible Christmas gift.

“It felt pretty good to send him home for Christmas, he’s doing pretty good right now and I’m trying to keep in touch with him, because he’s a good kid,” Rousseau said.

“I’m from the north, so I do the right thing, that’s what it’s all about…I think like a true Sault Ste. Marie and Wawa boy, a Canadian boy, I like to be helpful.”

About the Author: Darren Taylor

Darren Taylor is a news reporter and photographer in Sault Ste Marie. He regularly covers community events, political announcements and numerous board meetings. With a background in broadcast journalism, Darren has worked in the media since 1996.
Read more