'We had a lot of breakaways today, some point blank chances, but Roy played really well. This is his third game against us where he’s really stood on his head and gave his team a chance to win'
Dec 28, 2019 8:27 PM By: Matt Sookram 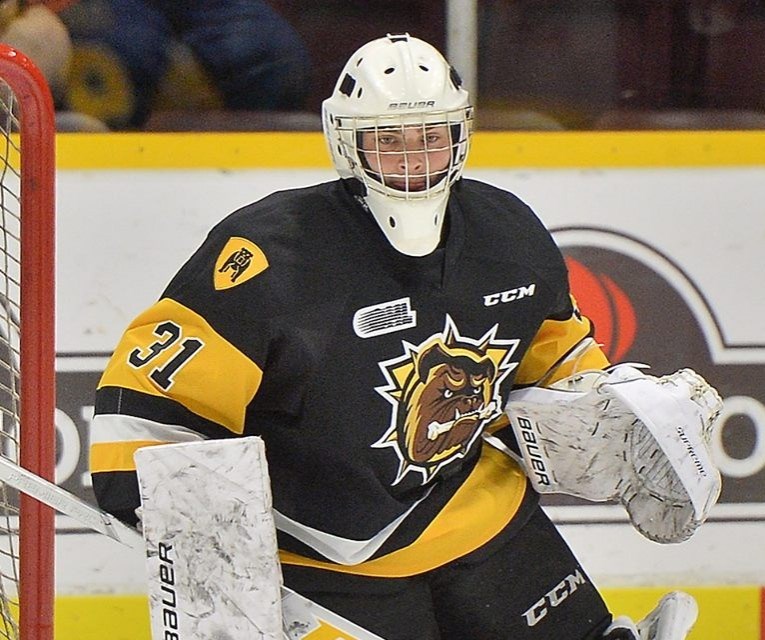 Callander native Zach Roy made 28 saves on 29 shots leading the Hamilton Bulldogs to a 5-1 win over North Bay. File photo.

It was only a one-goal deficit going into the third period but some key saves from North Bay native Zach Roy and plenty of power play time for the Hamilton Bulldogs in the final frame made all the difference in a 5-1 loss for North Bay at the hands of the Bulldogs.

“We had plenty of opportunities to tie it up or even take the lead,” says Battalion Assistant Coach Scott Wray.

“We had a lot of breakaways today, some point-blank chances, but Roy played really well. This is his third game against us where he’s really stood on his head and gave his team a chance to win.”

During the season series Hamilton is now 3-0 against North Bay and Roy has made 94 saves on 96 shots, including 28 on Saturday night at First Ontario Centre. Outside of stopping the breakaway chances, his best was arguably late in the second period when Captain Brad Chenier had a backdoor opportunity that went off the pad of Roy, who had sprawled out on his stomach. In the process, he shoved the puck back onto Chenier’s stick. Chenier took another shot and Roy just stretched his left leg out making a toe save on the rebounded opportunity. It kept the game 2-1 at that point.

North Bay had 16 shots on Roy in the second period but only managed six more in the third, while Hamilton scored three times en-route to pulling away with the victory.

While Hamilton only went 1/6 on the power play, they spent about eight minutes with the man advantage in the final period and Wray says that’s hard to overcome when you’re already down by a goal.

“We didn’t get too many looks on the power play today and they got a lot of power plays in the third, and we ended up being outshot by them in the third,” he says.

“It’s one of those things where you have to learn how to put teams away in the third or be right there with them and not allow the ice to tilt their way.”

The first of the three in the third came from Isaac Nurse who found a loose puck on the left side of the goal crease. He picked it up and buried it past North Bay goaltender Joe Vrbetic for his third of the season at 2:07 to make it 3-1.

Tag Bertuzzi would add two more in the period as he finished the game with a hat-trick with goals at 16:50 and 19:31 to give him 16 overall on the season.

He also opened the scoring in the first just 2:15 in when he was set up in front of the net and poked a puck underneath the pads of Vrbetic.

The second goal of the game happened in a similar fashion, with Lawson Sherk (2) set up on the doorstep and finishing a play by digging at the puck in the crease that moved over the goal line at 14:16 of the first for a 2-0 Hamilton lead, that they would carry into the second period.

“Right now it’s not about beating them down, but bringing them up and showing them more positive sides of the game,” said Wray about the young Battalion squad.

“We’ll definitely have some video sessions to show them the little things around the net. How to pick up loose sticks or loose guys and be a little tougher in front of the net.”

But North Bay certainly won the second period by firing 16 shots on net and getting one past Roy at the 2:00 mark when Kyle Jackson (5) skated off the boards and sent a shot toward the Hamilton goaltender that got over the glove of Roy and into the corner of the net.

North Bay is now 1-17-0 on the year away from Memorial Gardens and 7-26-0 overall this season. Up next on the schedule is a game on Saturday night in Oshawa against a Generals team that has always played them tough on the road.

They have just one win against the Generals in Oshawa since moving to North Bay and that came back on January 31, 2014 in a 5-1 North Bay victory.