'The surface infrastructure on Main Street downtown is at the end of its life and is beyond rehabilitation and requires complete reconstruction'
Feb 4, 2021 12:00 PM By: Stu Campaigne 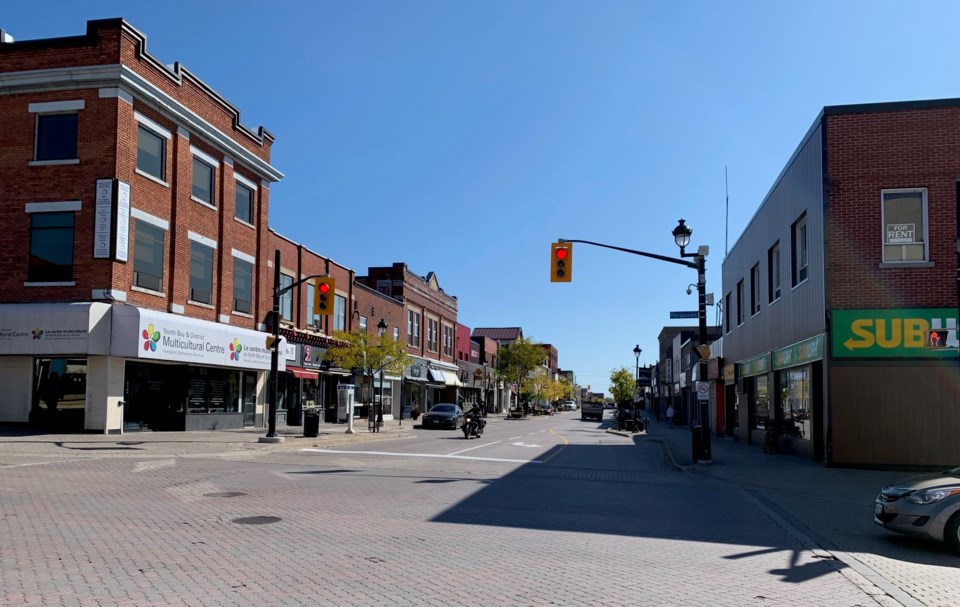 North Bay's downtown is in for a major facelift. Jeff Turl/BayToday.

A City of North Bay staff report is recommending the award of a $340,000 contract to R.V. Anderson Associates Limited for the design of the Downtown Main Street Reconstruction by North Bay City Council.

R.V. Anderson scored highest of the five proposals evaluated by the Purchasing Manager, the Special Project Development Planner, the Manager, Planning & Building Services and the Senior Capital Program Engineer. The evaluation considered experience, qualification, response to the scope of work and price.

The report recommends awarding the design contract and, ultimately, proceeding with the project as "the surface infrastructure on Main Street downtown is at the end of its life and is beyond rehabilitation and requires complete reconstruction. Not proceeding with the design and the subsequent reconstruction will lead to increased and escalating maintenance costs and safety concerns."

The project involves the reconstruction of Main Street from Cassells Street to Sherbrooke Street and Ferguson Street from Main Street to Oak Street, as outlined in the North Bay Downtown Waterfront Master Plan (DWMP), which states, "Streetscaping improvements will help to improve the attractiveness and overall usability of this historical Main Street."

R.V. Anderson Associates Limited City is a qualified engineering consultant and would complete the preliminary and detailed design of the Downtown Main Street Reconstruction if awarded the contract during Tuesday's regular meeting.

According to the staff report, "Much of the surface infrastructure in North Bay’s downtown has reached the end of its life and requires replacement, including interlocking brick roadway and sidewalks, curbs and gutters, retaining walls, stairs, railings, benches, and lighting. The last major renovations were completed nearly 40 years ago and deterioration of the hardscapes is now prevalent."

The North Bay Downtown Waterfront Master Plan Study by the City of North Bay welcomed feedback and compiled data in 2016 and was later adopted by Council in the fall of 2019.

The DWMP's potential economic benefits include:

The revitalization of Main Street plays a key role in the DWMP and "will include the replacement of the surface infrastructure in line with the concepts and renderings in the DWMP. These concept designs will be used as the basis for the engineering and landscaping designs, which will also evaluate and consider different material types for the various components."