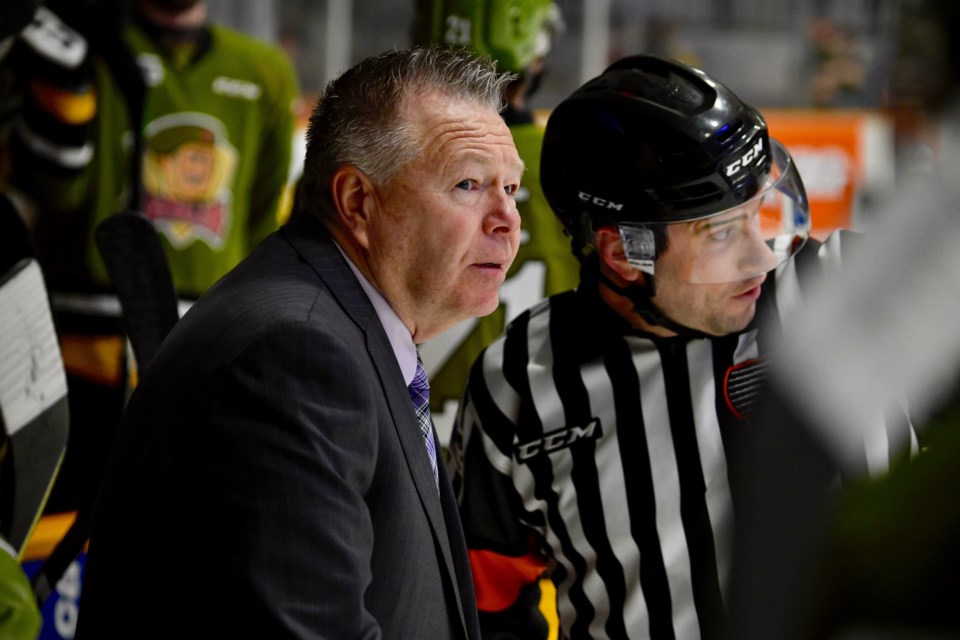 Stan Butler on the bench in February of 2018. Photo by Tom Martineau/BayToday.

It is hard to put the Battalion change in perspective.

But it is crazy to think there is not a single player on the Battalion roster that was alive when Stan Butler first started his coaching journey with the Battalion organization.

Butler posted a 667-723-61 record with the Battalion and led the team to the OHL Final twice. He also has coached Canada twice at the world junior championship.

He has been the target of serious criticism this season by fans and folks on social media, but remember it was not that long ago that Stan Butler was considered a hero in North Bay as he guided the Battalion in its first year in North Bay to the OHL finals.

Now, the 63-year-old will take on a different role as a special advisor to owner Scott Abbott, who chose Butler as his expansion coach and general manager way back in 1998.

He has been labelled a "trap coach" for many years, but despite that reputation, there are still some who swear by him.

"The way he taught me to play hockey is the way that professional hockey teams want," said Nick Paul, who had a successful career developing under the tutelage of Stan.

"At the time, it wasn’t always fun, because I didn’t want to play defence first, but now, becoming a professional athlete, and seeing what they want, the style of play, it really did pay off."

Barclay Goodrow is another.

"I think I learned a lot of things," said Goodrow about Butler.

"Stan coached me for five years.  He helped make my game what it is and helped me turn into the player I am today.  He did a lot for my career."

Matt Duchene, who played for the only Brampton Battalion team (North Bay did in 2014) to reach the OHL Finals in 2009, will always go out of his way to praise Butler for what he did for his career as well.

Hockey Canada has recognized Butler too.

He served as an assistant coach to Tom Renney with Canada’s silver medal-winning team at the 1999 World Junior Championship at Winnipeg and was named head coach of the Canadian national junior team for the 2001 and 2002 tournaments, winning bronze in Russia and silver in the Czech Republic respectively.

He is one of only a handful of coaches to have coached the Canadian juniors in consecutive years since the Program of Excellence debuted in 1982.

Butler also won gold with Canada's U-18 team at the Ivan Hlinka Tournament in the Czech Republic back in 2015.

So while many are quick to judge the longtime bench boss due to the lack of success in 2019-20, there is no argument that his resume is one many a coach would wish to have.

OPP hoping new video can spark tips to solve Melanie Ethier cold case
Jan 22, 2020 5:00 PM
Comments
We welcome your feedback and encourage you to share your thoughts on this story. We ask that you be respectful of others and their points of view, refrain from personal attacks and stay on topic. To learn about our commenting policies and how we moderate, please read our Community Guidelines.