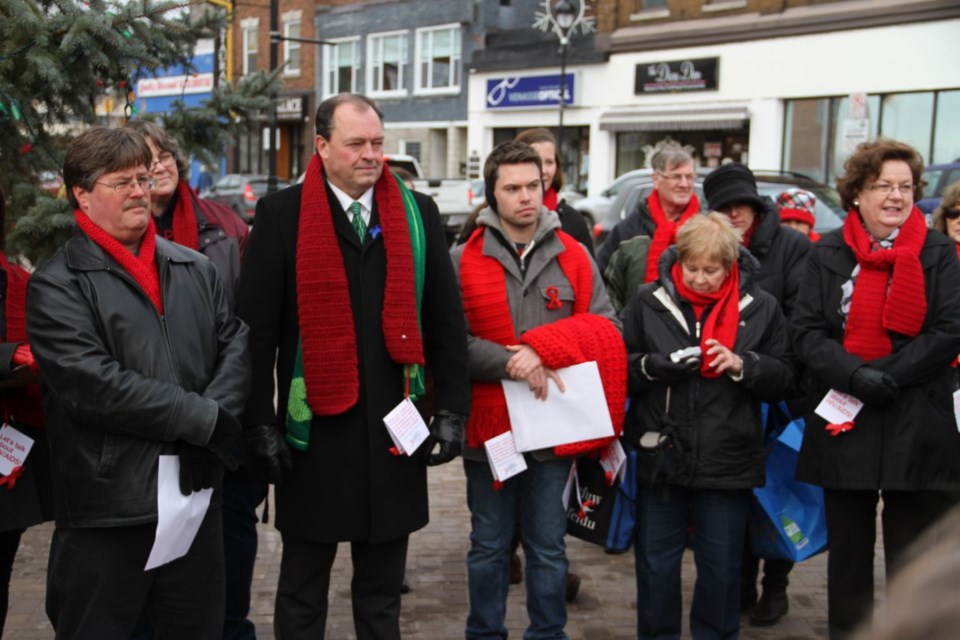 Mayor Al McDonald among other dignitaries were on hand for the ceremony. Photo by Chris Dawson.

More than 30 volunteers were busy downtown tying scarves on rails and light posts in downtown North Bay as an awareness initiative to make World AIDS Day.

The ceremony event kicked off with a World Aids Day proclamation read by North Bay Mayor Al McDonald at the Diegel Parkette on the corner of Fraser and Main street.

The Red scarves are tied to rails and light polls and then anyone is allowed to take one with the request that they read the aids information on the small card attached to the scarf and then take a selfie while wearing it.

“It symbolizes the red ribbon which is original AIDS awareness symbol and that’s why we started to tie in the scarves, so they symbolize a crossing of the ribbon as well,” she said.

“We aren’t asking for anything we are just asking people to support with sharing their time, reading the card, pass on the message but nothing more,” said Lalonde.

“Pass the message on it’s still World AID’s Day, it’s still prevalent, we still need to make that change today and by talking about it, it does break down the stigma and discrimination.”