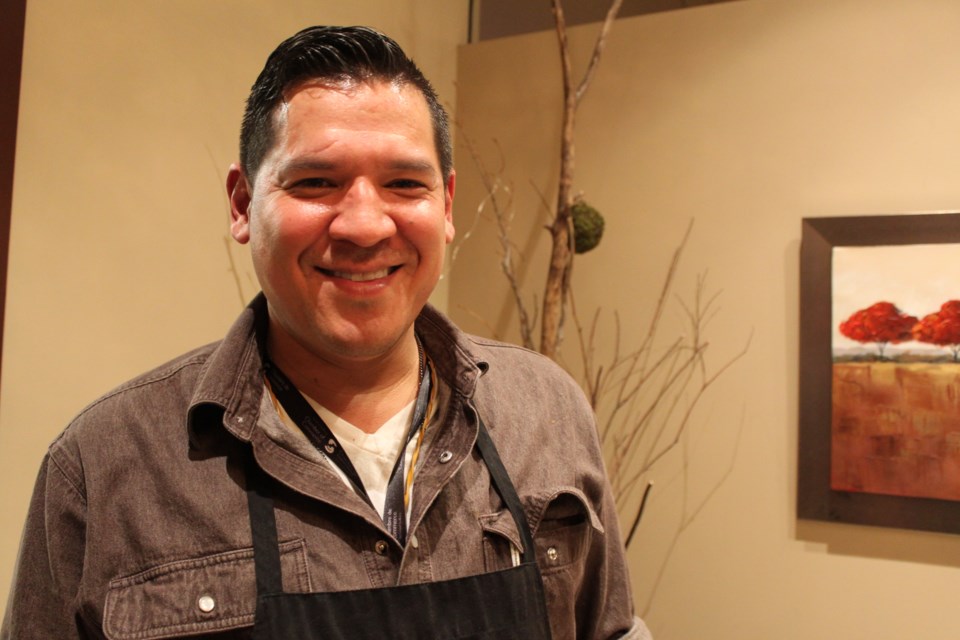 Chef Rich Francis, who spoke at the 2020 PEP Conference and Tradeshow in Sudbury, infuses his dishes with ingredients that are traditional to Indigenous palates. (Lindsay Kelly photo)

Sit down for a meal at Chef Rich Francis’ table and there is no frybread to be found.

“I will never teach my cooks how to make bannock,” said Francis, a Six Nations of the Grand River chef whose aim is to see traditional food systems restored to Indigenous peoples.

“I'll never teach them how to do that food system that almost killed us.”

Bannock – a doughy, deep-fried bread popular at powwows and festivals – was never part of Indigenous cuisine in pre-colonial Canada.

But after being introduced by Europeans in the 19th century, bannock and similar fatty, sugary fare became staples in Indigenous diets, supplanting more historic foods and contributing to the population’s rising levels of obesity and diabetes.

It’s time, Francis believes, for Canada’s original peoples to take back control of their relationship with food.

“In order to reinvent something, we first have to rediscover it,” said Francis, who is of Haudenosaunee and Tetlit Gwich'in ancestry. “And that’s my agenda right now with modern Indigenous cuisine.”

Francis shared his views in between preparing the dishes of a four-course meal during the gala dinner of the Procurement Employment Partnerships (PEP) Conference and Tradeshow, held at Sudbury's Verdicchio Ristorante, Jan. 21.

Now in its third year, the conference’s objective is to seek out ways to build industry-wide supply chain management, address the shortage of skilled labour, and build relationships between industry and Indigenous communities.

It was all delicious and inspired a number of photographers in the room to snap a few shots of their meal, which, for many, was unlike anything else they’d eaten.

Francis’ name will be familiar to fans of Top Chef Canada.

In 2014, he was the only Indigenous chef to appear on the fourth season of the TV reality cooking show, finishing the competition in third place.

A graduate of the prestigious Stratford Chefs School in Stratford, Ont., Francis has worked at Peller Estates Winery in Niagara-on-the-Lake and Toronto’s revered Splendido restaurant, which, before it closed in 2015, regularly topped the city’s best-restaurant lists.

These days, with an established hospitality business, Aboriginal Culinary Concepts, he surrounds himself with more personal endeavours focusing on food sovereignty and food security.

“Red Chef Revival,” a documentary Francis co-created and co-produced, follows him as he travels across Canada “to redefine Indigenous cuisine, create a better understanding of pre-colonial Indigenous food systems, and address truth and reconciliation through Indigenous foods and the impact of colonization.”

He’s also the co-creator of “Wild Game,” a 13-part docuseries being produced for APTN. Currently in production, Francis said the series is “a little wilder, a little gamier, a little more political, and a little more grassroots.”

This year, he’ll open a restaurant – The Seventh Fire – on Six Nations, which will also coincide with the launch of his cookbook, “Born Again Savage: Decolonization Through Indigenous Foods.”

Using these opportunities, Francis seeks to bridge the divide between Indigenous and non-Indigenous populations, creating better relationships and understanding.

“A lot of the infrastructure that goes through our Indigenous lands, let's be honest: you're f***ing up our food systems a lot,” Francis said.

“It's got the point now where it's concerning because, without food security, Indigenous people now are the unhealthiest that we've ever been. Diabetes and obesity are changing that.

“Our food security and our food that we depend on, it's not the way it used to be and we need to start taking a look at that and being a little better.”

A top priority for Francis is reigniting conversations about the foods they eat. He wants to educate people on the importance of preserving the rights of Indigenous chefs to hunt, prepare, and serve food the way their ancestors did.

It’s considered illegal to serve some of the traditional ingredients in his dishes, like moose or beluga meat, because of the legalities surrounding Ontario wild game inspections.

Too frequently, Francis said, he has to “go underground” to cook what he wants, or he risks paying fines and being treated like a criminal.

He’s hopeful that will change this year once The Seventh Fire opens.

Situated on traditional territory, Francis said his food practices will be sheltered from Ontario law, providing him with more freedom to operate.

He plans to work with a local harvester to source the ingredients for his food.

“Ironically, it's going to be on Mohawk land where I'm going to have absolute sanctuary to do what I want to do, where you can come and enjoy real Indigenous food the way it was meant to be, beyond cultural genocide,” he said.

“I'm really starting to hate that word 'reconciliation,' but that's really what it is, on a plate.”