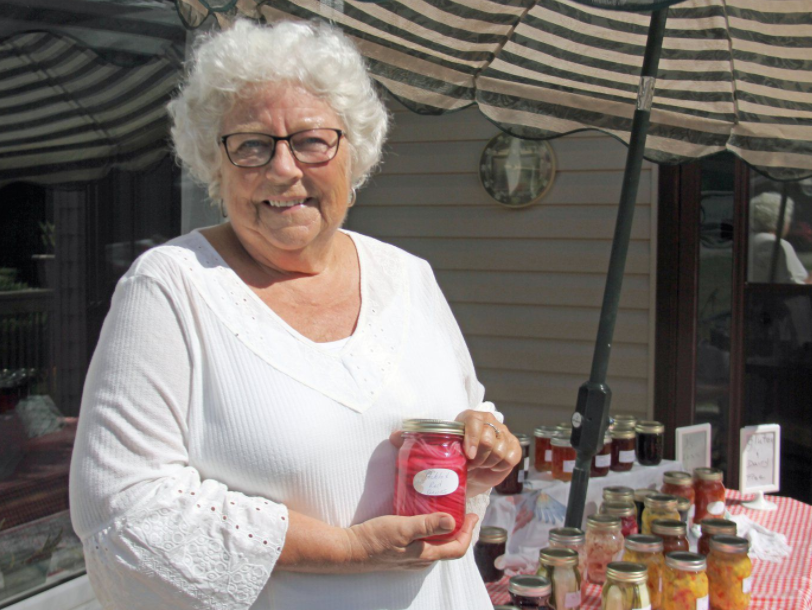 Bev Martin stands outside her home in Powassan where she sells her jellies, jams and preserves. Mackenzie Casalino, Local Journalism Initiative Reporter

POWASSAN – Bev Martin’s kitchen is where the magic happens. Built in the 1970s, some of the walls remain a bright teal, like an old 1945 Pontiac Bonneville.

Martin’s countertops parallel two walls, with one being taken over by a large dill plant used in her pickles. Her kitchen needs a lot of room for her preserve business.

Martin owns and operates Country Preserves from her home in Powassan. She started off by first making preserves for her family, picking up the hobby when she retired in 2007.

“When I retired, I thought this was a great opportunity to really explore this and see where it goes,” she recalls. “People really liked it so I made more and more and I started finding craft shows (to sell at).”

Martin admits she was nervous as “heck” prior to her first craft show.

“It was a new experience for me and I didn’t know how it would go,” she explains. “I just put out my samples and people tried it, liked it and bought it. It just went on from there. So I just continued to do what I can.”

Martin says her jams and jellies are made with a third less sugar than store-bought. She reduces the sugar even further in some products for people with diabetes.

“You can taste the fruit a whole lot more with less sugar, and I don’t use any sugar substitutes,” she says.

Martin says the secret to her preserves is the product and the process.

Martin says she truly enjoys making the products, experimenting with different ingredients. She doesn’t have a list of the number of different creations she has made.

It’s important to Martin not to waste any produce.

“If I’ve got little bits and pieces left, let’s say the pickle is too large for the jar, I’ll cut an inch off of it but I’ll save those pieces and put them in a separate jar and maybe use it for samples.”

Martin says the feedback is the best part and she says it’s encouraging.

“They tell me how good it was and how much they loved it. They come back and say ‘Oh that was gone in a heartbeat.’”

Her preserves are so popular they're featured in a post-apocalyptic short story called The White Lady, written by her daughter, Becky Hingley, in The Way Through: A Collection of Canadian Short Stories.

“Where it’s gone has just been amazing,” she says. “It’s really awesome that people really enjoy my product and more people are out there looking today for homemade products.”

Country Preserves can be purchased Saturdays from 8:30 a.m. to 1 p.m. at the North Bay Farmers' Market or by calling 705-752-5642. Martin also is included on the Great Powassan & Area Farmstand Tour at her house at 1733 Alsace Rd.