What Matthew Larivee pitched to the judges was his plans to expand the yurt part of his farming
Apr 27, 2021 7:00 PM By: Rocco Frangione 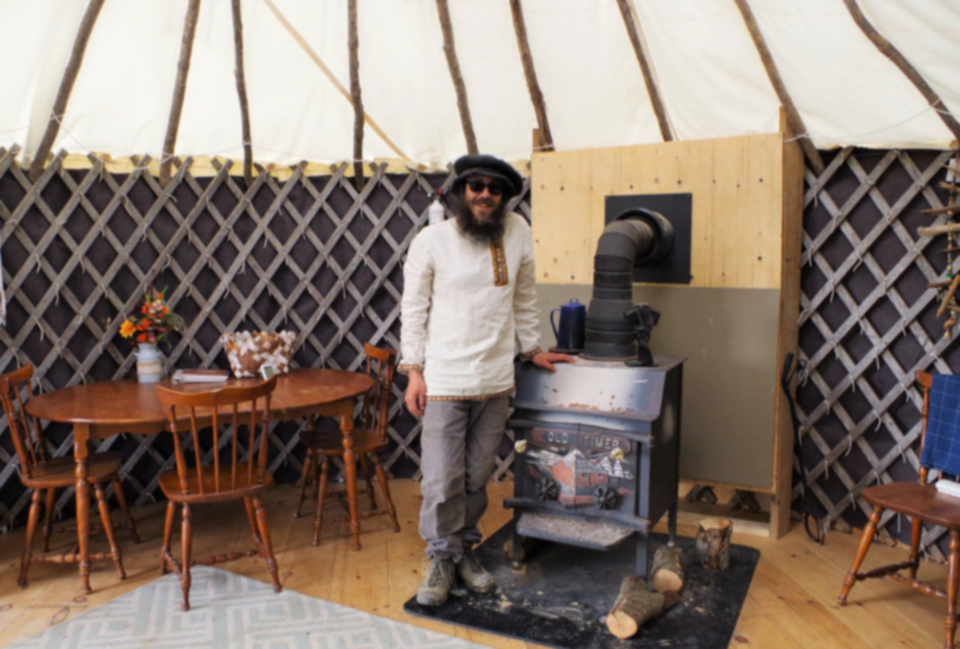 Matthew Larivee hopes to expand his yurt tourism business from the money he won from a contest promoting tourism across Northern Ontario. Pictured: The outside look of the yurt currently at Foxfire Heritage Farm in Powassan. Kathie Hogan Photo

The owner of Foxfire Heritage Farm in Powassan has received the Northern Ontario Spark tourism award after taking part in a Dragons' Den-like competition to help him grow his business.

Matthew Larivee was the Northeastern Ontario winner of the tourism initiative award. Two other winners took the Northwestern Ontario and the Algoma/Central region honours.

Each winner receives $3,000 plus a three-month mentorship and in-kind support services from Tourism Excellence North that help all three take their tourism initiatives to the next level.

The Spark award is a partnership between Destination Northern Ontario, Excellence North, and the Ontario Tourism Innovation Lab.

Northern Ontario businesses were asked to send in their ideas on how they could expand their tourism offerings so they could attract more people.

Seventeen individuals did just that and Larivee was among the top six chosen to explain and pitch their ideas to a panel of judges online.

What Larivee pitched to the judges was his plans to expand the yurt part of his farming.

A yurt is what the nomads in Central Asia, especially those in Mongolia, lived in.

The yurts were round, made of felt or animal skins, and were collapsible so the Nomads put them on their oxen and took the “portable homes” with them as they travelled across different regions of Asia.

Larivee taught himself how to make a yurt and use it as a tourist draw where people can stay.

He had three minutes to explain his plans to the judges, who then peppered him with questions for six minutes.

Larivee admits he had butterflies in his stomach at the pitch stage.

But he made sure he was prepared, especially since many people don't know what a yurt is, so part of his three minutes was spent explaining to the judges that it's a type of dwelling used thousands of years ago.

“I wrote up a little script ahead of time of what I wanted to say so that I would use the full three minutes and not go over,” Larivee said.

Larivee has a double yurt on his property and his plans are to eventually have four yurts, if the demand and interest to stay in them is there.

The double yurt is actually two single yurts he made and then combined, with one having an 18-foot diameter and the other a diameter of 14 feet to create a figure eight-like structure that forms two rooms.

The larger section has a wood stove, table, pull-out couch and futon while the smaller section is equipped with a double bed and a chair.

It can hold a maximum of five people, which Larivee admits is a tight fit.

The Spark award money will go toward building a second yurt, which will be 20 feet in diameter.

It will fit four people because Larivee will equip it with two double beds.

Larivee said he put together the canvas portion of the second yurt last year and is now preparing to buy lumber for the lattice walls and platform that support the outer covering.

Because he makes everything himself, he's able to keep his costs down.

He says the circular nature of yurts makes them more efficient to heat “than a squared room because there are no corners for heat to get trapped in.”

Larivee says the combination of canvas with a felt interior acts to insulate the yurt and makes it capable of retaining heat from a wood stove during the winter, and also keeps the interior cool in warmer weather.

“This means our guests don't have to use the woodstove during late spring or early fall because the yurt keeps the natural heat,” Larivee said.

Yurts gained popularity in the 1960s during the “hippie” period and more recently saw a resurgence in popularity as provincial parks “got on the glamping band wagon with tiny houses.”

“We promote our yurt as a glamping experience,” Larivee said.

“It's camping with just enough amenities so people are not intimidated by a more traditional camping experience.”

Larivee provides a blend of amenities where there is no power in the yurt, people use an outhouse and he provides a small power pack that powers a small light and can also charge devices.

Guests bring their own food in a cooler and they have access to a barbecue.

“We also provide wood for a campfire pit if they want to cook over a campfire,” Larivee said.

In addition, Foxfire can provide home-grown food for guests because it's one of the things it does.

“We have a roadside stand where we sell seasonal vegetables, eggs, and meat all grown on the farm and it's just 100 metres from where our guests stay,” Larivee said.

“Also I tell the guests they're staying at a working farm, so things will be going on during their stay. It could be cutting hay, me blacksmithing, or taking care of the animals.”

Larivee says for those guests who are interested, he's always ready to explain different aspects of farming and what specifically goes on at Foxfire.

Foxfire Heritage Farm sits on 100 acres and Larivee has developed 70 of those acres by turning parts of the woodland, bush, and maple forest into trails for hiking or snowshoeing and cross-country skiing in the winter.

COVID-19 delayed the spring launch of Larivee's yurt experience in 2020 until the fall.

He says people stayed during the fall and early winter, until the next wave of COVID lockdowns resulted in closing down the yurt for the next while.

At the moment, Larivee says not many people are booking a stay because of the uncertainty surrounding the pandemic.

But he knows judging from the initial response last year, the yurt bookings will pick up again once the lockdowns end.

- Rocco Frangione is a Local Journalism Initiative reporter who works out of the North Bay Nugget. LJI is funded by the Government of Ontario.