The goal of the farm market is to buy from local farmers "when they produce more than they can handle,” co-owner Greg King says
Sep 21, 2020 11:00 AM By: Rocco Frangione 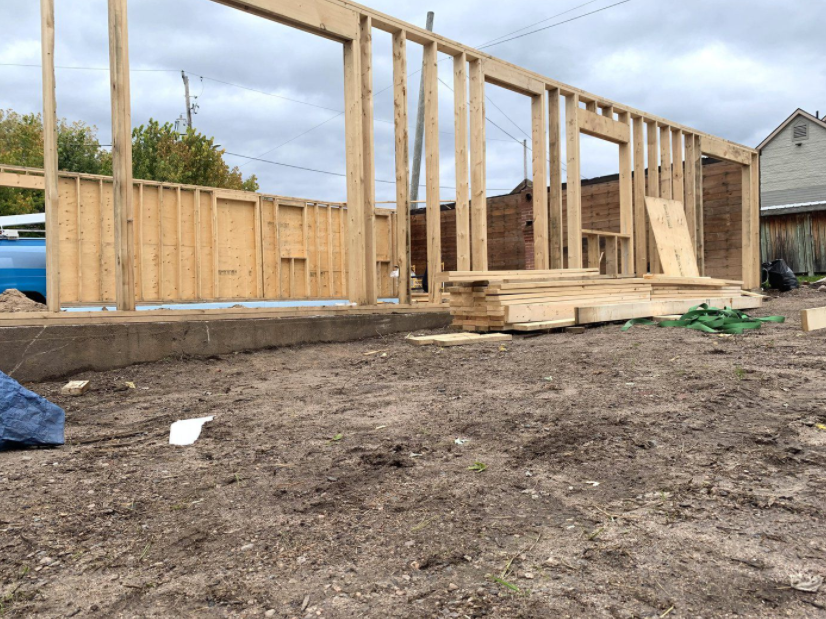 The roof will soon be going up on The Carriage House Market in Powassan, which promises to give consumers more opportunities to buy locally grown food. Greg King Photo

Work is progressing well on a co-op-like farm market in Powassan.

However, co-owner Greg King of Roots and Roost Farm in Trout Creek is quick to point out the phrase "farm co-op" is not the most correct way to describe the endeavour.

"It's going to be privately-owned between two farms and it's not cooperatively run like a co-op is," King explains.

"But it (works) like a co-op in that it helps other farms in the area."

The other owner of the venture is Alpaca Springs Farm in Powassan, which is operated by Linda and Harold Beatty.

As for not operating the business like a co-op, King says the co-owners "didn't want too many voices muddling things up.”

Both had a very clear vision of where they wanted to go with the business and were confident in their decision.

The farm market is being built where a former carriage house once stood in Powassan.

King says they have learned from longtime residents the building was once used by a doctor before the era of cars. He travelled the countryside on horse and buggy delivering babies and making house calls, storing the carriage and horses in the building.

When he first saw the former carriage house, King thought it would be great if it could be preserved and simply renovated to become the farm market.

But hurdles like building codes, insulating the building and having it properly heated would turn a simple renovation job into a nightmare.

King says the decision was made to take down the carriage house and build the farm market on its foundation.

However, not being one to let good wood go to waste, King says much of the timber from the carriage house is being repurposed.

King says the wood was carefully taken down, some of it will be used on his 100 year-old barn in Trout Creek, while parts, such as the former entrance doors, will remain on site.

"We might turn them into wall displays so they can hold the produce. Or we could also use them as interior doors because they are no longer viable as outside doors because of insulation issues."

King says great care was taken when taking down the old wood from the carriage house.

However, one part of the building was left intact. It's the original chimney, which will be incorporated into the finished building.

When complete, the farm market will be 30 by 40 feet, with the foundation of the original carriage house reinforced with concrete and heated.

Half of the building will be used for retail while the other half will be used as storage space, as well as for packing items. This area also includes a kitchen.

Ideally, King would like to see the building built before the snow flies.

He and a handful of others have been doing much of the work themselves to control costs.

With the wood framing up, soon the roof will be added, and King says that's when the tradespeople can start doing the work he's not qualified to carry out.

The goal of the farm market is to buy from local farmers "when they produce more than they can handle,” King says.

"Farmers will usually pick on a Friday for the local farmers' market, but not everything they pick sells," he explains. "So come Monday you face your product going to waste or feeding some really nice produce to chickens or pigs."

This is where the farm market will enter the picture, buying that surplus produce from the farmers for resale.

King calls it a win-win for all parties because farmers don't see their produce go to waste and consumers get to buy fresh, locally grown food.

He would like to operate the farm market year-round, but isn't yet sure if that will happen.

Obviously, King says, it's not possible to sell fresh produce during the winter, but it is possible to stock frozen food that's grown locally.

As for the types of produce the farm market will sell, that will range from asparagus early on in the spring season, to strawberries, followed by carrots, tomatoes, potatoes, cucumbers and beets.

Customers also can expect plenty of corn, which King grows on his farm.

"In fact, we have the most corn in the area except for Leisure Farms (in Sturgeon Falls), which does more than us."

King hopes to be at the farm market from time to time to interact with customers. But because he has his own farm to oversee, his appearances will be limited

The people the operation will employ will likely come from his farm, and King says they will be able to explain what's involved in the growing process.

And while he wasn't able to renovate the former carriage house, King has come up with a name for the business to honour the past.

"We're calling it The Carriage House Market," he says.

And he wants to assure potential customers right now that when it's open, the farm market will be stocked with locally grown food, preserves and canning goods.

"If it can't be grown in the area, you won't see it on our shelves," King emphasizes.