'They are exceptionally fine performing officers within the service but also within the community'
Jan 31, 2020 1:00 PM By: Chris Dawson 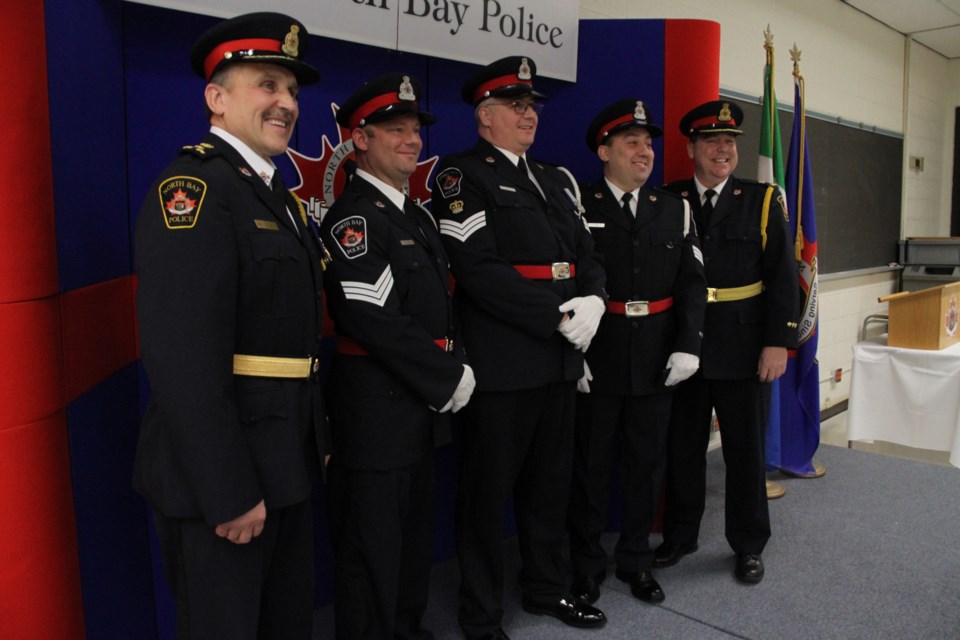 It was not a long service but one that is important for Chief Scott Tod.

This morning, the North Bay Police Service held a ceremony to promote three officers. Scott McFarlane has been promoted from Sergeant to Staff Sergeant while officers Fernando Cirullo and Jason Long received promotions to Sergeant.

All three bring with them more than 50 years of combined experience with the North Bay Police Service both on the road and within criminal investigations.

"They are exceptionally fine performing officers within the service but also within the community," said Chief Tod.

"They all have strong links within the community. We are proud of these three and we believe they are the change for the future to make this service successful in the future with the challenges and demands."

For Cirullo, the day is extra special.

"I just want to bring with the team that I am going to be patrolling with, leadership, support. As you know this week, mental health is a big issue so I want to ensure that our membership is taken care of and looked after to the best of my ability. It is a difficult position but I want to be there for our people as well as the community of course."

For McFarlane, he is looking forward to taking on a new role within the organization.

"For me personally I was a supervisor in our criminal investigations section and I am returning now to uniform, so I will be in charge of a uniform 12-hour patrol shift and supervising the men and women who are out on patrol on a daily basis," explained McFarlane.

"We have one of the greatest services within the province and it is a great place to work."

Jason Long recently received a commendation for his work in helping to break an international child pornography ring. Hired in the early '00s, Long says he brings with him nine years of patrol experience along with nine years in criminal investigations.

"I came back to the road just over a year ago now as one of the senior members," explained Long.

"At the beginning of the year, I became more of a leader to our younger recruits as one of the older guys - a mentor or role model for some of the younger officers on the road. That will just transition now because I am a Sergeant. I will be on a platoon with 12 other officers and provide that guidance and leadership."

Chief Tod believes the Staff Sergeants and Sergeants have a very important role within the service.

He says when the administration is out of the building, the Staff Sergeant literally becomes the De Facto Chief.

"To achieve Staff Sergeant in any police service, especially when you become the duty officer for the service, is a significant achievement in somebody's career," said Tod.

"Our two sergeants also work on the platoon. They will work with a number of members, anywhere from 14 to 12 members on their platoon and assist in developing the strategies and the patrol patterns we are going to have within the city to address either a crime problem, any anti-social behaviour problem or some other type of call for service which we have. Again the sergeants spent time working with the constables in developing those constables as well as addressing what we call our identified crime problems or identified problems within the police service that we would like to change within the community."