Police Board looking at body-worn cameras for officers

'We must act bias-free and in a way that promotes public confidence and protects human rights'
Jun 4, 2020 11:00 AM By: Chris Dawson 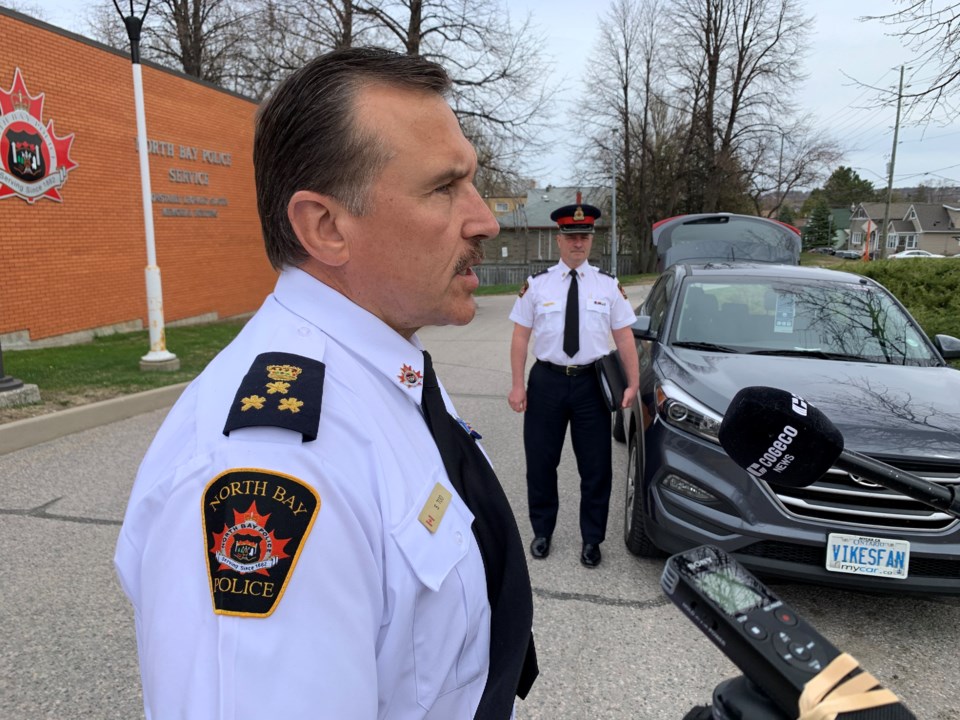 Police Chief Scott Tod speaks to the media during a late May press conference outside the North Bay Police Headquarters. Photo by Chris Dawson/BayToday.

The North Bay Police Board Chairman has asked Police Chief Tod to look into the acquisition of body-worn cameras for officers.

In a North Bay Police Service memo acquired by BayToday through a police source, the Chief says he met with Police Board Chair Dennis O'Connor on Wednesday to discuss the issue.

"He has asked me to prepare a report for the Board on the police use of body-worn cameras and conduct a review of recent reports including the Ontario Human Rights Commission report titled 'Human rights and policing: Creating and sustaining organizational change' and report to the Board a plan of action to improve our service," Tod stated in the internal memo.

"Like many of you, I have received comments from members of the community who are outraged and concerned about the reported events in Minneapolis and the police officers responsible for the death of Mr. George Floyd," said Tod.

"I too am shocked and disappointed about the events in Minneapolis and the effect that it has had on many citizens in Canada, the United States, and other world centres. Racism in any form is unacceptable and a disgrace to our profession. As professionals, we have sworn an oath to uphold the laws of Canada including the Charter of Rights and Freedoms that is prominent in our Constitution as the law of our nation. Those human rights are absolute in their description and well-defined for our profession. We must at all times remain committed that in our practices and pursuits as a police service we abide by, and respect, the rights of all human beings."

Anti-racism demonstrations have been taking place worldwide in response to the Floyd death. Even here in North Bay, a pair of separate groups are planning peaceful demonstrations this Saturday.

In the memo, Tod urges staff to talk about the concern about racism.

"In the coming days please discuss the issue of racism and policing in your social groups, platoons, and with management," Tod continued in the memo.

"We are interested in your thoughts and ideas of how we can improve our relationship with each other and the diverse communities we serve. Thank you for your service and dedication to respecting the values of our profession."

Tod says every act of conduct by a police officer has an effect on the trust and respect they desire from the community.

"It is a complex relationship that we share with our diverse communities and citizens. The relationship demands we abide by the laws of our country and respect the need to understand and ensure the rights of all human beings, at all times, as described in the Charter of Rights and Freedoms," he stated.

Tod says the Service is committed to building and improving relationships with all diverse communities.

"We have learned much from the Truth and Reconciliation Report, by Justice Murray Sinclair, about the shameful past of our relationship with the Indigenous community," he said.

"We must act bias-free and in a way that promotes public confidence and protects human rights. On occasion, where we are criticized and blamed for our actions and conduct we must be honest in our reaction and appropriate with our response. The individual and the police organization must move forward with acceptance of fault or wrongdoing in the rare times that it does occur."