'They got the ball rolling for sure for fundraising when Mr Northrup stepped up for the North Bay Police Association as well as a personal donation and that made me really think we can really do something with this'
Oct 8, 2019 4:00 PM By: Chris Dawson 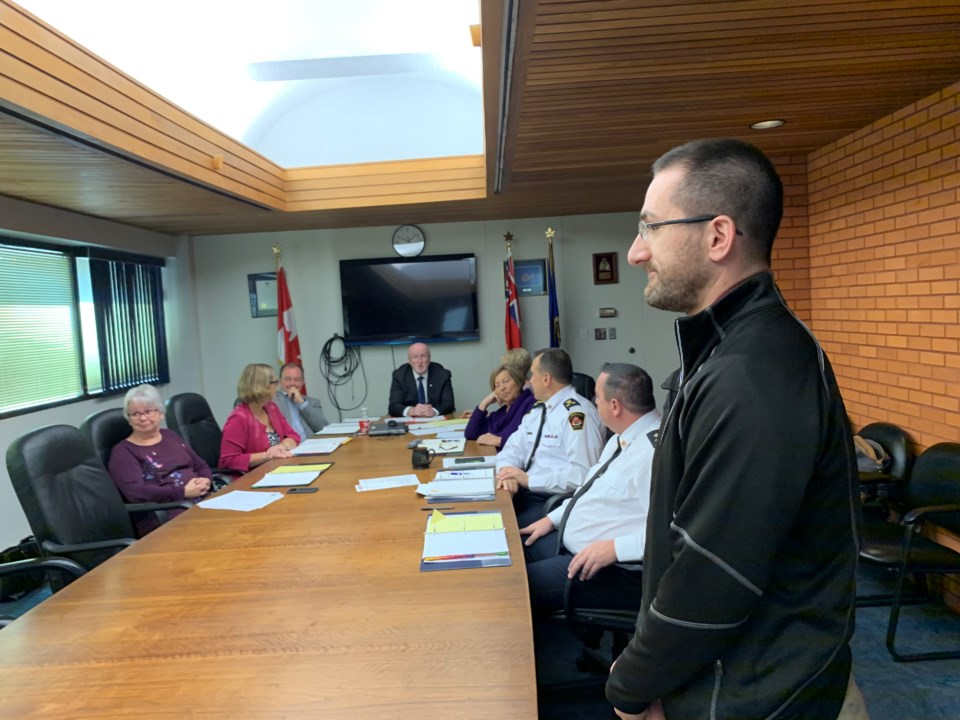 Local reporter Clarke Heipel, thanks the police association for a generous donation for his CIBC Run for the Cure team Brittany's Bevy. Photo by Chris Dawson/BayToday.

Clarke Heipel never imagined how big his Run for the Cure fundraiser would go.

The YourTV reporter started a Run for the Cure team to help raise money in support of Brittany Bortolon, a local CTV reporter who was recently diagnosed with breast cancer at only 26 years of age.

The event went off with great success on Sunday with close to $4500 raised through the team named Brittany's Bevy.

At the police board meeting Tuesday, Heipel came to thank the police association who jumped on the idea after seeing a news story about Brittany.

"They got the ball rolling for sure for fundraising when Mr Northrup stepped up for the North Bay Police Association as well as a personal donation and that made me really think we can really do something with this," said Heipel.

Aaron Northrup, the police association president, was the one who made the two donations.

"I have known Brittany for a few years, she's a great kid and with the association, we have a substantial charity account and cancer affects everybody and that is why I reached out to Clarke to give a donation from the North Bay Police Association for $500 and hopefully it helps the cause and the cure," said Northrup.

See related: North Bay reporter opens up about her battle with breast cancer

Heipel says the news of Brittany's cancer really hit him hard. He knew he had to do something to help and the community has rallied around her.

Heipel says he is not done helping out his news colleague as he hopes to see her healthy and back to work in the new year.

Telemedicine Network reopens in Burk's Falls
Oct 24, 2020 9:00 AM
Comments
We welcome your feedback and encourage you to share your thoughts. We ask that you be respectful of others and their points of view, refrain from personal attacks and stay on topic. To learn about our commenting policies and how we moderate, please read our Community Guidelines.