Point back in Texas for Stars Stage 3 training camp 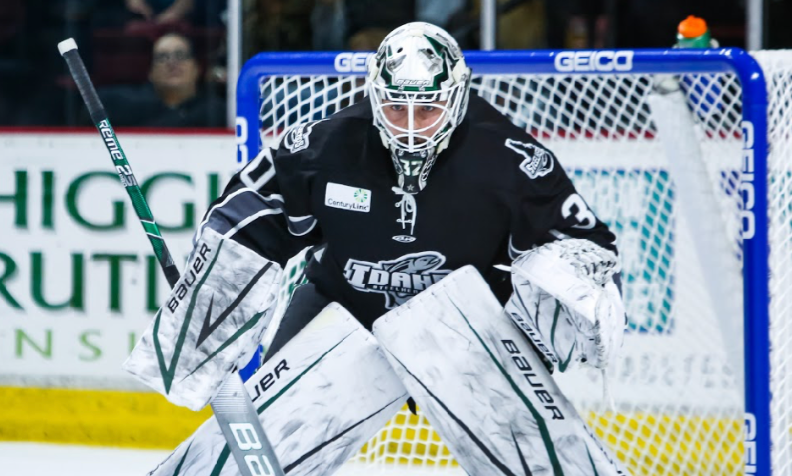 Point in action with the Idaho Steelheads in 2019-20. Photo submitted.

North Bay's Colton Point is back across the border to be part of the Dallas Stars Stage three roster which was announced over the weekend.

The 22-year-old finished his second season of professional hockey with the Idaho Steelheads, Dallas Stars affiliate team in the ECHL.

The 6'4" netminder is one of five goaltenders invited to the camp including Ben Bishop, Anthon Khudobin, Jake Oettinger, Landon Bow and Point.

"With how uncertain the times are currently and the NHL having no limits on how many goalies teams can have during phase 3 getting called down to camp is just getting my foot in the door to hopefully help make an impact and potentially have a shot of staying with the team through the rest of reopening," Point told BayToday.

Point is hoping to hit the ground running in hopes of sticking with the Stars roster that will head into the Western hub bubble in Edmonton, Alberta at the end of the month.

"I’m hoping to be able to showcase how much I’ve improved this season, especially going into a contract year next season, this is an excellent opportunity to work with the NHL staff and skate with NHL calibre players to further improve going into next season."

Point was hoping to be approved to hit the ice with the Stars by Wednesday.

It has been an interesting and stressful off-season for Point, who went from Idaho straight to his fiance's home in Long Island, New York back in March.

He was finally able to get back home to North Bay in mid-May.

Now he has travelled from a nearly COVID-19 free community like North Bay to another COVID-19 hotspot; this time in Texas.

"Colton is on his way to Texas...happy and worried for him all at the same time," his Mom Colleen Point stated through social media on the weekend.

"It’s been tough being a mom lately."

Point, going into the final year of his entry-level contract with the Stars, only got into one AHL game this past season, is hoping to work hard, stay healthy and perhaps take advantage of a camp injury, which would allow him to be part of the Stars playoff plans.

Marquardt joins the Admirals
Sep 26, 2020 12:00 PM
Comments
We welcome your feedback and encourage you to share your thoughts. We ask that you be respectful of others and their points of view, refrain from personal attacks and stay on topic. To learn about our commenting policies and how we moderate, please read our Community Guidelines.