As a result of the SIU investigation, Constable Brandon Catcher is now charged with assault causing bodily harm.
Nov 25, 2016 6:36 PM By: BayToday Staff 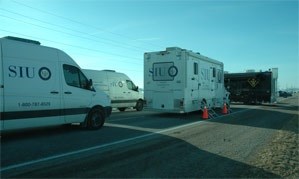 The SIU has laid an assault charge against a Parry sound OPP officer in relation to an arrest in June.

See: SIU Appealing for Witnesses to an Arrest in Parry Sound

The Director of the Special Investigations Unit, Tony Loparco laid the charge.

The SIU investigation found the following:

As a result of the SIU investigation, Constable Brandon Catcher is now charged with assault causing bodily harm, contrary to section 267(b) of the Criminal Code.

The officer is required to appear before the Ontario Court of Justice at 89 James Street in Parry Sound on December 15.

"The matter is now properly before the courts. In consideration of the fair trial interests of the accused, the SIU will make no further comment," says a news release.

The SIU is an arm’s length agency that investigates reports involving police where there has been death, serious injury or allegations of sexual assault.