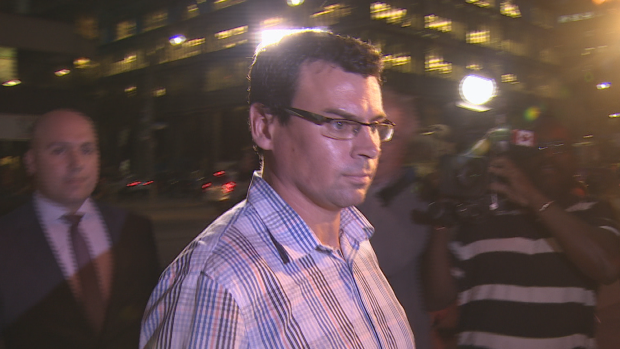 Alleged beer tosser Ken Pagan was formally charged by Toronto Police, and a court date to answer to the single count is set for Nov. 24.

He was released with conditions, which include that he does not attend games at the Rogers Centre and, according to Pagan's lawyer, Tyler Smith, in a Postmedia Network article, an "absolute, as in, not only while at the Rogers Centre," prohibition from consuming alcohol.

Pagan, now a Hamilton resident and Postmedia employee, has ties to North Bay as a former local sportsman and media member. Pagan has received support from some in the North Bay community who were incredulous that he could be involved.

Pagan was at the centre of a viral manhunt after a picture (that Pagan later confirmed to the Canadian Press was of him) was released on social media Wednesday evening. Toronto Police named the pictured man as a  suspect in the throwing of a beer can from the bleachers onto the Rogers Centre outfield turf that nearly struck Baltimore Orioles outfielder  Hyun-Soo Kim. The Orioles and Toronto Blue Jays were playing a sudden death playoff game Tuesday night when the incident occurred.

Wednesday night, Pagan surrendered to police and was released, saying little under advice from counsel. Pagan indicated Wednesday that there was more to the story, and that police had the wrong man.

However, one day later, Pagan again appeared at Toronto Police's 52 Division and the mischief charge was laid.

The Blue Jays play Sunday at Rogers Centre in Game 3 of the ALDS, their first home game since the beer can incident. The team has formally apologized to the Orioles for the Toronto fans' behaviour, which also allegedly included racial slurs being shouted at Orioles' players and coaches.

The team has also promised to improve their alcohol and security measures, although no details on what the changes for Sunday's game will be have been released.

In a Canadian Press interview, British professor Geoff Pearson, a hooliganism expert, said he does not believe that stricter alcohol restrictions will curtail the sort of behaviour seen in Toronto Tuesday.

Pearson says that banning alcohol outright will not reduce drunkenness, "And there is evidence it may actually increase (it) because people will drink more before they go in."

Pearson's research deals with English football but translates to other sporting fans' behaviour. "A missile (like a beer can) being thrown and not hitting anyone really wouldn't make the newspapers anywhere in Europe," said Pearson.