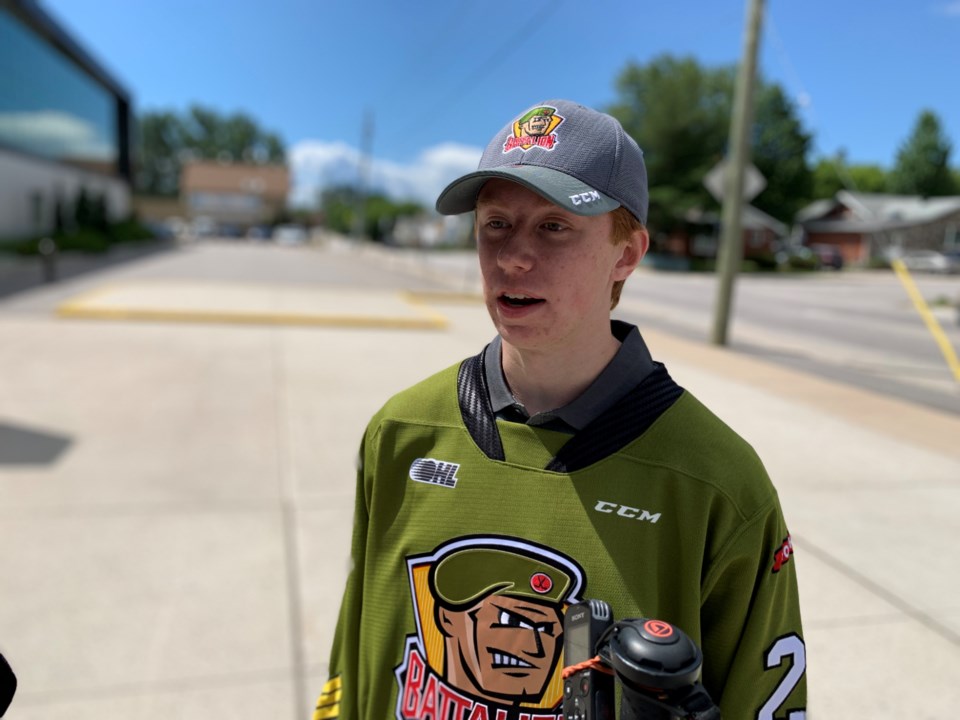 Owen Outwater doing his first in-person media interview as a member of the North Bay Battalion. Photo by Chris Dawson/BayToday.

You can use all the cliche's, it was like a "light at the end of a tunnel," another step closer to "normal,"  but for Adam Dennis, having a player come for a visit to North Bay this weekend was certainly a breathe of fresh air for the North Bay Battalion General Manager.

Dennis and Battalion bench boss Ryan Oulahen welcomed first round draft pick Owen Outwater to North Bay on the weekend and even held a short media opportunity around noon on Saturday outside North Bay Memorial Gardens.

"We are proud of what we have here, we have a lot to offer players. It is fun for us to get in so we can show it off, and show them all the nice things about North Bay, show them the places they are going to spend their career over the next four years so I think that is something we have missed from the recruiting from the players standpoint and always nice to get back to normal," said Dennis, noting the Outwater family visited restaurant patios of establishments such as The Boat and Average Joe's during the weekend visit.

Outwater made only his second trip ever to North Bay for the trip. However, the articulate 16-year-old Orleans, Ontario product has heard a lot about the Gateway City as his Fitness Trainer happens to be be former North Bay Centennial Derek Switzer.

"All the stories he has told me about North Bay, he has got nothing but good things to say about North Bay and he was really excited when he saw I got picked here," said Outwater.

On June 4, Outwater was selected 11th overall in the OHL Priority Selection by the Troops. He admits every OHL team contacted the forward prior to the draft so he says he went into the early June draft with an open mind.

"I am hoping for the best," said Outwater.

"I could not be more excited where I ended up, North Bay is a great place to play and I am really excited for the future."

The 6'3, 170 pound power forward who played with the Oakville Rangers U16 AAA program in the COVID-19 shortened season hopes to  be a standout when training camp opens in North Bay in September .

"I want to come in and make an impact right away," admitted the confident forward who was joined by his mom and dad on the trip to North Bay.

Dennis, who always notes that character is important, has been impressed with Outwater's attitude and maturity.

"Owen is a competitive kid with a high IQ and the one thing from all the people that come back about him is he has an appetite to learn. He wants to get better," said Dennis.

"He's very coachable and I think when you are a young guy with those attributes you can go a long way."