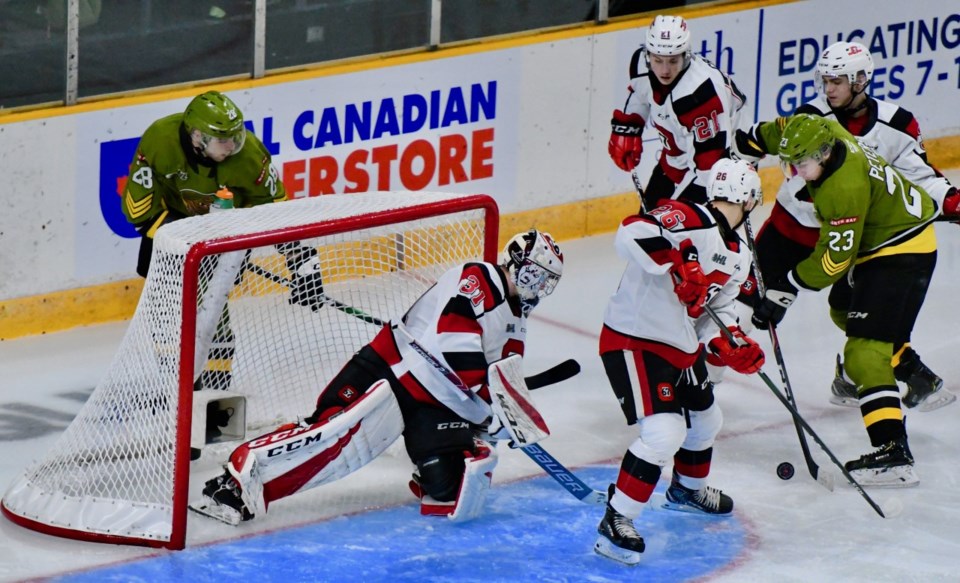 And with the Troops playing their finale of a three-game weekend swing, their visit to the nation's capital would end in disappointment again as the Barber Poles took the contest 6-1 on Sunday afternoon at TD Place.

“I think there are more positives to take out of that game than there are negatives, to be honest,” says Battalion Assistant Coach Scott Wray.

“They are a really highly skilled, good hockey team and I thought we played with them for most of the game.”

After the way it started, it didn’t look like North Bay was going to be in the game much at all.

Two quick goals out of the gate put the visiting Troops in a hole.

Marco Rossi (15) banged in a rebound at 1:18 at the far side post. The initial shot was under Joe Vrbetic’s glove, but the Battalion netminder never froze the puck, it came loose and Rossi was there waiting for just such an opportunity.

Four minutes later, Austen Keating (14) scored after Ottawa won an offensive zone face-off and promptly put the puck on net and putting the 67’s ahead 2-0 at 5:32.

“We did get off to a tough start with two quick goals by them, but if you go into the second period with the shots really close, and then in the third the shots are close again and we got a goal from Russell in the second on that nice breakaway and it’s a 3-1 game.”

Russell found a loose puck in the neutral zone and took off, getting past the defense and burying his eighth of the season at 11:53 of the second period to get the first, and only, goal of the game for North Bay. That cut down the three goal lead to two for the moment, after Ottaw got another from Rossi (26) at 4:35 of the second.

And throughout the first 40 minutes of the game, North Bay got more responsible defensively, taking care of the special team's assignments.

“The penalty kill did a really good job of shutting down the top unit,” says Wray, acknowledging the 5/5 night North Bay’s penalty kill put together.

Down by two it felt as if the Battalion were moments away from making it a one-goal game, and turning the pressure back on the 67’s. However, they were unable to get anything past Ottawa Goalie Will Cranley, outside of the Russell breakaway.

“The score doesn’t really dictate the way we played. We had some sloppy play coming out in the third, and all of a sudden it’s 6-1,” says Wray.

Wray says the last two losses felt completely different from the Troop's perspective. They had a 3-0 lead over Kingston on Friday, which ended in a 4-3 loss to the Frontenacs on a last-minute goal from exceptional status player Shane Wright.

“On Friday in Kingston, it was a tough one, and this was a much different game to take positives from. I know it sounds weird because it’s a 6-1 loss, but there is a lot more there than just a 6-1 loss,” says Wray.

“We’ve got guys learning how to compete, night in and night out. You watch Ottawa’s top line, they come hard at you and just keep coming at you. They are point hungry and maybe if our younger guys see that, maybe it’s a little infectious for them to learn that's how they need to be.”

Everything up to this point in the year can be looked at as a lesson in what they are expected to do in the years to come. It’s important to remember that seven of the players that suited up for North Bay have played less than 30 Ontario Hockey League Games including goaltender Vrbetic. Another rookie, Ottawa area native Kyle Jackson has now played 42 after his 12 games call-up last year that took place over four different weekends.

“We’re right there,” says Wray. “Just a couple bounces away, just a couple of saves away from being right in that game and our guys, maybe they don’t see that right now, but it is there.”

The Battalion has now lost three in a row, coming off a win at home over the Niagara IceDogs one week ago at home. They will get a week off as the Flint Firebirds are the visitors on Sunday at 2 p.m.