Hikers had drifted almost 3 km from shore when the OPP helicopter was able to hover above the hikers and make a daring ice rescue, returning both people safely to shore
Feb 22, 2021 10:00 PM By: CollingwoodToday Staff 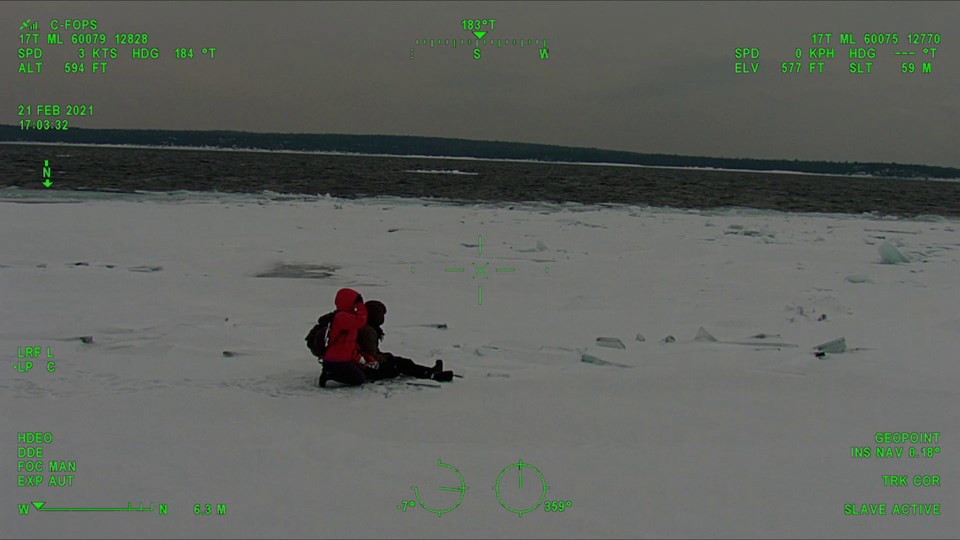 Two hikers were rescued from an ice floe near near Tobermory on February 21, 2021.Image supplied by OPP

The Grey Bruce OPP responded to an incident on the afternoon of Feb. 21, at the Bruce Peninsula National Park near Tobermory in the Northern Bruce Peninsula.

A pair of hikers had been walking on the ice near the park when a large piece of ice broke away from the shoreline leaving the hikers stranded, as this floating ice floe continued drifting out onto Georgian Bay according to an OPP news release.

A JRCC Hercules aircraft located the hikers and continued circling above, monitoring the situation from the air. The hikers had drifted almost 3 kms from shore when the OPP helicopter was able to hover above the hikers and make a daring ice rescue, returning both people safely to shore. There were no injuries.

"This was amazing teamwork by all of the involved services. Everyone worked together to safely rescue these hikers. This situation could have ended in tragedy.”

The temperatures have really been fluctuating this winter, so use extreme caution when travelling and avoid unnecessary risks on the ice and near shorelines cautions the OPP.