A Queen's University professor is working on a portable device that will help people detect Lyme disease faster in hopes to fight misdiagnosis of the disease.
Jul 21, 2021 7:00 PM By: Dani-Elle Dubé 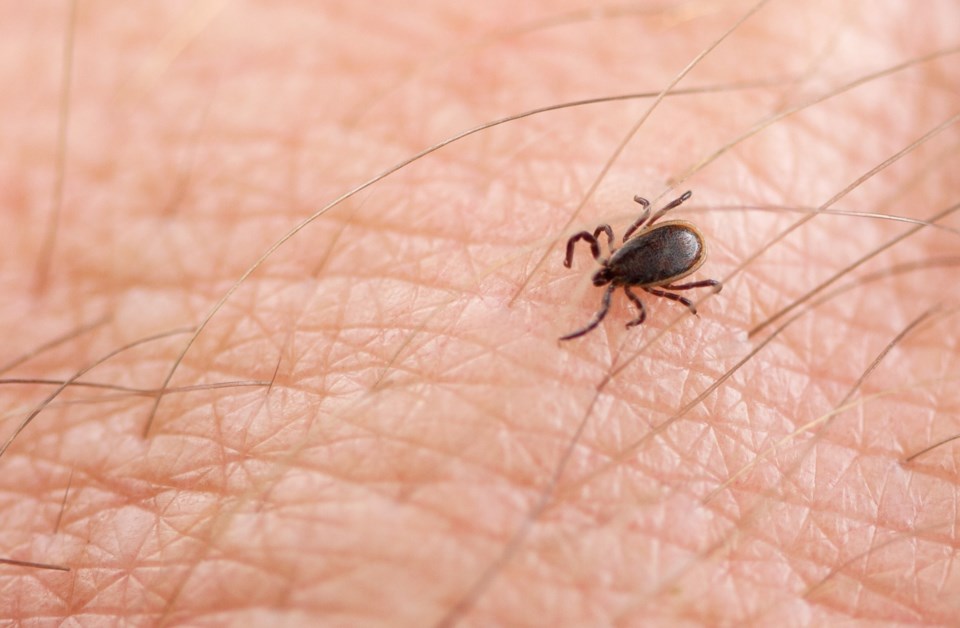 Warm temperatures in Canada mean more deer ticks who carry Lyme disease, and ticks in Ontario are more abundant now than they were 10 to 20 years ago.

This is according to research headed by Queen’s University in collaboration with 54 Canadian universities across 12 countries.

According to Dr. Robert Colautti, who heads a lab at Queen’s, devoted to the study of biological invasions, ticks live for two years and feed just three times: once as larvae to grow into nymphs, the again to grow in adults, and then on final time to lay eggs.

The area between Ottawa and Kingston is a hot bed for for ticks to thrive.

Each time, he explains to CityNews Ottawa, they may feed on different animals or humans, and each of these animals has a different chance of transmitting different pathogens to the ticks.

“Rodent populations are an important factor because they determine survival rates of the many tick larvae that hatch each year and need to feed quickly before they run out of energy and die,” Colautti explained.

And with ticks, comes the very real possibility of contracting Lyme disease.

The tick and Lyme disease connection

“Lyme disease in the strict clinical sense is caused by a specific group of bacteria that are mostly found in deer ticks,” he said. “The risk of somebody getting Lyme disease depends on both the number of deer ticks and the percent of deer ticks that carry the bacterium. These both depend on the animal populations.”

The bacteria that cause Lyme do not seem to be transmitted through eggs, Collauti explains, so ticks only get infected if they feed on an animal that is infected.

“The biggest risk to humans is the nymph stage because larvae that hatch from the eggs have not fed yet,” Collauti said. “The adult stage is also dangerous, but these ticks are usually bigger and easier to detect before they feed for too long.”

Another important factor, he adds, is how long a tick has been feeding.

It can also take a while for the bacteria to leave the tick and enter the bloodstream, so if a person is bitten by an infected deer tick, the risk of getting Lyme increases with the amount that a tick has been feeding.

But Lyme isn’t the only thing ticks can carry with them, Collauti warns.

“In Ontario we have at least five emerging tick-borne diseases: Lyme Disease, Babesiosis (Borrelia burgdorferi bacteria) Anaplasmosis (Anaplasma bacteria), Babesiosis (a malaria-like protist called Babesia), Powassan Virus (an ssRNA flavivirus), Tick-Borne Relapsing Fever (Borrelia miyamotoi bacteria that is genetically similar to Borrelia burgdorferi),” he pointed out. “We talk about Lyme disease but we should really be talking about Tick Borne Diseases; Lyme Disease is just one kind of tick-borne disease.”

The future of ticks in Canada

This is what we can expect for years to come because of continuing warming temperatures — which means better survival of ticks and the animals hosts that carry pathogens — and an ongoing problem of introducing ticks, hosts and pathogens.

For example, a new tick introduced from somewhere in east Asia was found in New York State in 2010, and it will probably make its way into Canada within the next 10 years, he says.

“If we've learned our lesson from COVID, it's that it can be very difficult or impossible to control a pathogen once it has established,” he said. “Imagine if we had stamped out COVID the same we prevented the SARS outbreak in 2004 and you get some idea of the tremendous value in monitoring for new diseases and having a plan in place to react quickly to squash any new arrivals before they establish to form a new pandemic.”

Unfortunately, Collauti says, he doesn’t know if Canada has a good system in place to do that for tick-borne disease in the country.

And like a lot of things over the past year-and-a-half, COVID has hindered and disrupted the work groups were conducting on ticks.

But another problem hindering research from furthering, Collauti figures, is that people are focusing too much on a very narrow definition of Lyme disease. More research needs to be done to understand the full diversity of pathogens carried by ticks in Canada and how this translates to health impacts of people suffering from tick-borne disease.

At the moment, Collauti is working with his team, which includes 21-year-old Indumathi Prakash, a Harvard graduate of molecular and cellular biology who is also part of the Mitacs Globalink program, to develop a portable device for rapid detection of tick-borne Lyme disease.

Prakash is helping to develop the first-of-its-kind device to extract DNA from deer ticks in the field as part of a project for rapid detection of pathogens using on-the-spot gene sequencing.

The research is part of a larger project aimed at eliminating misdiagnosis of Lyme disease through more accurate and fast identification of the pathogens ticks carry.

The idea is that device will trap a tick in a small container and apply a special syringe to extract its DNA, which will then be read by the gene sequencer.

The approach is expected to give positive identification of harmful bacteria in a matter of hours, compared to 24 to 48 hours it typically takes when ticks suspected of carrying the disease are sent to a lab for analysis.

“The basic idea is that when patients are bitten by a disease-carrying tick, the sooner they are treated, the better the outcome,” said Colautti.

How to protect against ticks

If bitten, remove carefully with a tweezer as deep as possible to avoid breaking off the tick’s head inside the skin.

Then, see a doctor as soon as possible, especially if you think the tick has been feeding for more than 24 hours (the body will expand like a small balloon).

The Lyme situation in Canada

In just 10 years, reported cases of Lyme disease have gone from the hundreds to the thousands.

In Ontario, alone, Public Health Ontario reported 1,159 cases in that same year — 36 of which resulted in hospitalizations.

Ontario’s Lyme Disease Map for 2021 shows Ottawa being a risk area for the disease — an area that extends all along eastern Ontario and parts of southern Ontario. 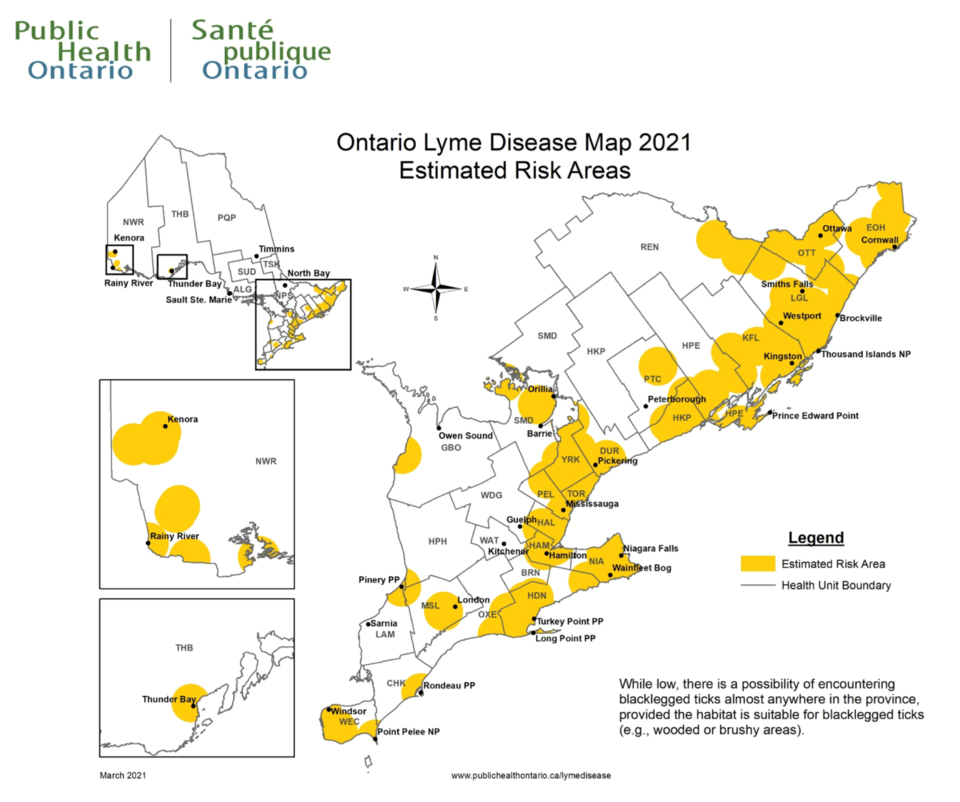 There are a few ways to tell if you have been hit with Lyme disease.

According to Public Health Ontario, most symptoms in humans appear between three and 30 days after a bite from an infected blacklegged tick.

If not treated, Lyme can make you feel tired and weak. Bad cases can result in harming your heart, nerves, liver and joints.

Untreated Lyme can last years and recurring arthritis and neurological problems, numbness, paralysis and, in very rare cases and death.

People living with Lyme disease can consult MyLyme.ca, a website that tracks pain and other symptoms over different parts of the day to try to understand why some people seem to suffer more than others, Collauti says.

About the Author: Dani-Elle Dubé