If you tune in to the History Channel on Sundays at 10, then you are probably familiar with the popular show, The Curse of Oak Island, on which the Lagina brothers, Rick and Marty, strive to solve the challenge of a potential buried treasure that has challenged people for centuries.

Having made a fortune in business, Marty and his brother are pursuing a long-time dream that was sparked in their youth, apparently, by a Reader’s Digest article.  In a swirl of mystery that includes pirates and even the Knights Templar, the brothers are pitting science and technology against myth and intrigue, and have thousands following them in that pursuit.

Less well known is Marty’s other adventure, the establishment of a winery on the Old Mission Peninsula that juts out into Lake Michigan forming the eastern arm of Grand Traverse Bay at Traverse City Michigan.

Mari Vineyards, named in honour of his grandmother, just opened its brand new winery in 2016, though vines were first planted back in 1999. The impressive stone winery could easily be at home in Tuscany, and Marty is every bit as dedicated to its success as he has been in any of his ventures, including the television show.

It is a gravity-flow operation, with the grapes introduced at the top, and as they are processed, move down from level to level, naturally, with minimal mechanical intervention, allowing the wine to be treated as gently as possible. The in-ground cellar permits constant environmental control. 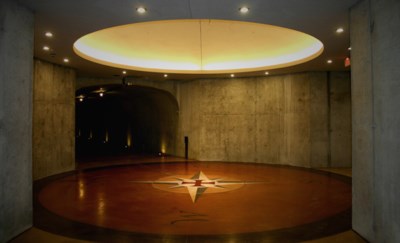 Then, the most easterly tunnel is oriented so that its opening faces directly at the point of sunrise with the Summer Solstice. While there may be something mythic about this, the biodynamic school of wine-making actually utilizes the flow of seasons and nature in its practices. There may be more coming in this regard at Mari Vineyards.

Meanwhile, there is more than architecture to catch your attention, as the winery is home to some grape varieties more commonly associated with Italy than with eastern North America. Included in the mix are such grapes as Nebbiolo and Sangiovese, as well as Refosco and Teroldego.

Typically, these grapes need a longer growing season than this region offers, but Mari Vineyards with winemaker Sean O’Keefe’s guidance are using a canopy system which permits the grapes to ripen more fully, gaining more heat during the day, but still able to cool off during the night. You can see the canopies in the background of the picture of the winery, above.

Sean, whose family owns Chtaeau Grand Traverse, wanted to explore wine possibilities more deeply, and so signed on with Mari Vineyards. Moving from the security of the family business took courage, and that decision is acknowledged with the image of the figurative “gilded cage” he escaped from now gracing the new Mari Vineyards labels.

One of their top wines is called Row 7, and therein lies a tale. In 1999, when the vineyard was being planted, there was a rush to get the vines into the ground, and so family and friends applied themselves to the task enthusiastically…but not so carefully.

As a result, when this section of the vineyard was planted, there was no knowing which vines were where, and so the outcome was a “field blend” of many varietals, not unlike what can still be found in old vineyards in California.

Fortunately, the wine made is the happiest of accidents, probably one of the most impressive reds I have tasted in the region. Having spent two years in new oak, the wine is mid-weight and delicious with suggestions of strawberry and other red fruit.

In the cellar, Mari is beginning to employ 1200 litre oval German barrels called “stücks”, as well as 2400 litre “doppel-stücks”. The 2016 Pinot Grigio was the first wine to undergo that treatment, resulting in a wine with more finesse.

The winery’s third vintage of Chardonnay, the 2016, was aged 50 per cent in second and third year oak barriques, and 50 per cent in new, 600 litre demi-muids, resulting in a Chardonnay reminiscent of a French wine.

The new Riesling is being aged in the “dopple-stücks. The 2016 is quite dry with just 6 grams of sugar per litre. It seems to suggest some lemon notes along with Granny Smith apple.

In other reds, the Cabernet Franc spends almost a year in older oak barrels, and by dropping some of the fruit before it ripens, Mari is able to eliminate those green, herbaceous notes to which this varietal can be susceptible.

Another red, Praefectus, again give the nod to Marty’s interest in History, as this wine honours the rulers of ancient Rome, the Prefects. An 80\20 blend of Cabernet Franc and Cabernet Sauvignon, it has a bit of a tingle on the tongue, but had very good depth.

As the vines get older, the wines they produce will get better and better. I don’t know if Marty will ever solve the mystery of Oak Island, but the odds are pretty good that together with Winemaker Sean O’Keefe he is in the process of establishing another treasure win Mari Vineyards.

Each of the two peninsulas framing Grand Traverse Bay have winery associations, and they have events co-ordinated throughout the year.  The Wineries of Old Mission Peninsula (WOMP) will feature Winter Warm Ups on January 13, with Romancing the Riesling following in February, Blossom Days in Mid-May, and Divas Uncorked in June. For tickets and further information visit the website

On the Leelanau Peninsula, which is home to two dozen wineries, events scheduled include Sips & Soup, January 20; Taste the Passion, February 10,11; Sips, Chips & Dips, March 4; and Spring Sip & Savor, May 5,6.  You can visit the website to learn more.

Despite the fact that the release features only one wine from Argentina, two from Spain, and none from Portugal or Chile, Vintages, having recently tempted us with more expensive offerings, now presents its Smart Buy issue.  We can only hope more bargains follow as wines from these nations are also released. 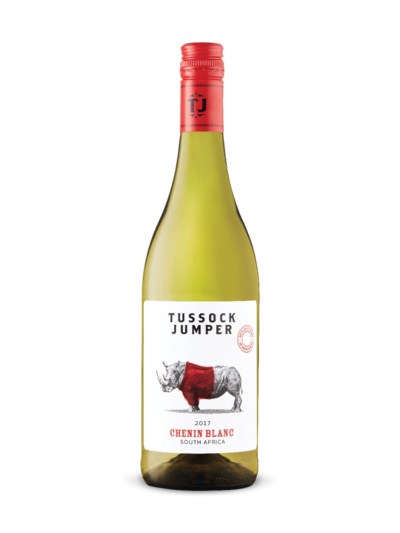 Paul Mas Estate Viognier 2016, $13.95, a reliable producer of good, inexpensive wines in France’s Midi, offers stone fruit and pear as well as citrus notes, all in a balanced, satisfying manner.

Domaine Jacky Marteau Sauvignon Touraine 2016, $14.95, from France’s Loire, is said to suggest passionfruit and guava in a racy style, with lots of citrus on the finish. It should satisfy those who crave good examples from New Zealand.

Abad Dom Bueno Godello 2015, $14.95, from the Bierzo region in Spain is very tempting. Winespectator.comscored it 90 and says “the apricot and pineapple flavors are accented by tarragon and briny notes in this snappy white.”

Joseph Cattin Pinot Blanc 2016, $15.95, from Alsace, took gold in Paris in 2017, and offers peach\apple flavours and some tightness at the end. Vintages suggests pairing this with a ham-and-cheese quiche.

Clos du Bois Calcaire Chardonnay 2014, $19.95, hails from Sonoma’s Russian River Valley.  Its flavours come on quietly, suggestive of citrus and apple, but with a texture that is plush and a depth that is admirable.  The use of oak is skillful, evident in the finish, but far from “in-your-face.”  It is deceptively simple in its purity, but ultimately quite satisfying.

Any of these three wines from France’s Rhone and southwest will be very pleasing. Foncalieu Reserve du Crouzau St-Gervais Cotes du Rhone Villages 2012, $16.95, and Courtois la Source Cotes du Rhone, $14.95, both have great reviews, and Aydie L’Origine Madiran 2014, $14.95, described as ripe and full-bodied, was #59 on the Wine Spectator’s Best Buys for 2016.

Feudi San Pio Passatempo 2016, $14.95, is described by Vintages as “youthful and vivid with incense, cherry, plum and fig aromas and flavours.”

El Pedrosal Crianza 2014, $17, from Spain’s Ribera del Duero, has “elegance, balance, and freshness” and may be the finest vintage of this wine ever, according to robertparker.com – 91

D’Arenberg The Footbolt Shiraz 2014, $17, a big red from Australia’s McLaren Vale, is described by James Suckling as “Full body, round and juicy. Lovely savory finish,” – 93.

On the regular list we have the latest edition of the Ruffino Il Ducale Toscana IGT, the 2015, $19.95. The word “Toscana” indicates that this wine is probably made with Sangiovese along with grapes such as Cabernet Sauvignon.  In this case the Sangiovese is accompanied by 40 per cent Merlot and 15 per cent Syrah.  The wine is tasty and satisfying, with excellent balance and significant red and black fruits coming through on the finish.

At the Wine Rack stores, two new Ontario wines have joined the portfolio.  Arterra Chardonnay and Arterra Pinot Noir both 2016, carry the name of the new owner of the Inniskillin\Jackson –Triggs portfolio. Each is $29.95. Italian Marco Piccoli is the winemaker.

The Chardonnay, which was fermented in 100 per cent French oak, was aged on its lees for greater extraction and texture. It exhibits bright flavours, good depth, and oodles of fruit on the long finish. It is a classic.

The Pinot Noir is quite deep with lush fruit.  Apparently the 2015 included 15 per cent fruit that was treated in the appassimento method of drying the fruit, intensifying the flavours. I don’t know for sure, but there could well be some of that dried fruit here, too, brightening the whole experience.  It is smooth, with good acidity on the finish. A little exposure to air prior to drinking rounds out the overall effect.

Available only at the Inniskillin Winery is the impressive Discovery Series Baco Noir 2016, $19.95, crafted by the Head Winemaker, Bruce Nicholson.  Here is the hybrid grape that soars in Ontario, and this example is exceptional.  There can often be a wine-y leathery note characteristic to Baco, but here it is toned down and buffed very nicely.   The wine is a deep violet-red with dark currant fruit and a tinge of tobacco, all very smoothly presented. It will accompany hearty fare admirable, such as the barbecue dishes suggested by the winery, along with flavourful stews. Contact the winery at 905-468-8056 about ordering.