Northern Ontario Party not invited to debate, but gets its points across here

From our rebirth and my personal experience with Ontario Northland and the divestment threat I am strongly in support and would demand rail service be restored and expanded
May 16, 2018 4:45 PM By: BayToday Staff 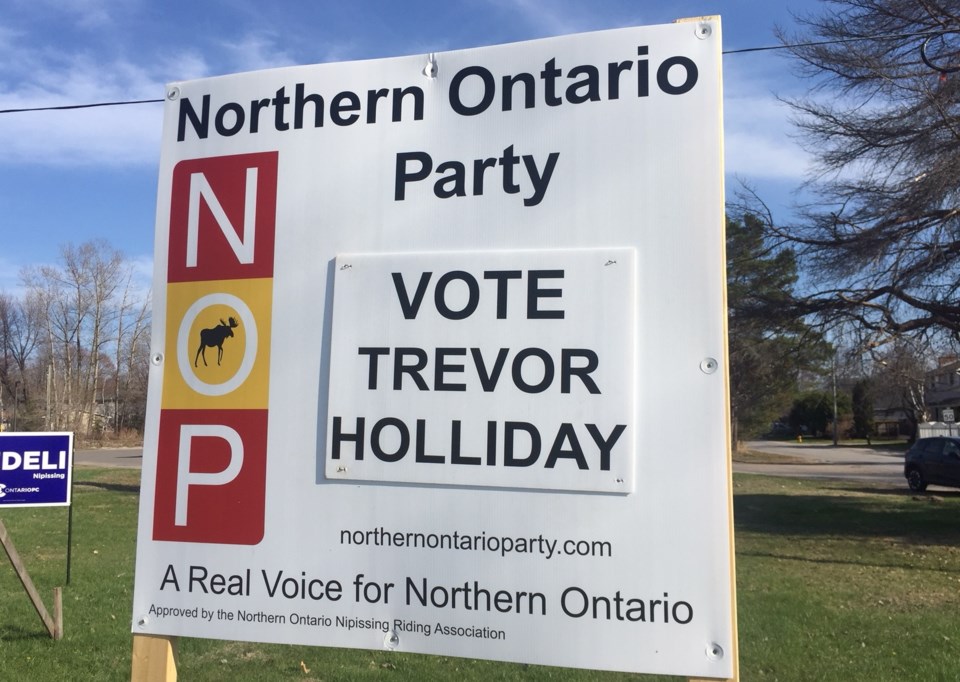 Editor's note: The Northern Ontario Party and the Libertarian candidates for Nipissing were not invited to last night's Chamber of Commerce televised debate so we've offered them space here to answer the same questions posed to the other four candidates.

The NOP party leader Trevor Holliday's response is below.

These are my responses to the questions asked at the debate, which I would have debated, and my stance.

- The other parties are focused on growing our debt and dumping a lot of money into these handouts especially with the debt being so bad at this time.

- Hospitals & Long-term care facilities are faced with being with overcrowding.

- Long Term Facilities or senior residences would have a doctor or nurse practitioner assigned to and responsible for. This would free up hospital beds and 'family doctors'.

-  I will also review and ensure Long Term & extended health care policies and legislate to ensure the best care is provided, the affordability, and beneficial to the well-being of everyone. Time spent with long-term or seniors will be increased by at least double the current allotted, while caregiver to patient ratio will be improved by at least 20%.

Autistic and Developmental Delay children have a lapse in funding and/or stopped. How would this change?

- I would fight for you Linda Thomas-Ouellette and all parents who have children with any extra assistance or programs of any kind to ensure that they are not having to feel excluded or have no assistance to ensure our future generations well being.

- We need to fix all the wasteful spending in all areas to ensure that the tax dollars are properly spent and not wasted or thrown away as many parties have done in the past. Does this mean cut back? No, it means ensuring the money is allocated properly.

Health Cabinet to break down silos within ministries.

- There need to be quicker and more efficient services and instead of forming a health cabinet the 13 ministries need to be better trained and enough staff to ensure health care of any kind is not jeopardized in any way at any time.

- Just throwing money at it does not make it go away or fix the problem. We need to start with education, training and assistance and support for all areas affected by poverty, homelessness and mental health. It is time to change the approach of responding to the issues instead of fixing the causes or hurdles in the way already.

- We are all Northern Ontarians and no matter what we need to ensure support or networks for those who want it no matter what. We are in this together.

Bring down the cost of childcare.

- There are some programs already in existence that I would ensure are expanded and utilized where daycare is provided in some workplaces at a reduced rate. Daycare should be affordable for all and not prevent parents from returning to work or even causing career changes.

- I will fight to ensure that childcare is not a setback or hurdle for any Northerner as I personally have experienced these hurdles and setbacks.

- The federal government is implementing the legalization of marijuana. We need to ensure that enough funding and support is allocated to and for the potential situations that may arise. An example would be policing and sales.

- To be done right there needs to be standards and controls put on to prevent add-ons of chemicals etc. just to benefit the companies as was done with cigarettes. It needs to be done right and support in place for police, the public and all sectors that will require adjustments, support or advice.

- In Northern Ontario, I strongly believe we need to have more immigration and services/retraining for newcomers to grow Northern Ontario. Instead of continuous overpopulating of the south why not build on the north and grow the industry and the economy of Northern Ontario.

- From our rebirth and my personal experience with Ontario Northland and the divestment threat I am strongly in support and would demand rail service be restored and expanded. I would not stop there. Instead of just wasting money as past governments have done, I push for Northern Ontario to once again lead the Rail industry and modernize the entire system into this century

- All the other governments in power have had their hand in on divestment/sale of Ontario Northland including Star Transit, airlines, ferries and Ontera by either abstaining on a budget, begin the process or flip-flop on the topic depending on the group they were talking to. Time to build up the north instead of further colonize it/us.

Development of ring of fire

- All the big 3 parties have had MPPs in Legislature and how many bills were presented to begin the process or expedite it. The only time this seems to get attention is on the eve of an election. I will not let this continue.

- That being said the Mining act needs to be modernized and also to ensure the locals and all affected are not robbed from. Northern Ontario built Toronto and that is not just what we say it is fact and why should we let this happen again. It gets mined here, it gets manufactured here and we reap the rewards, not Toronto living on the wealth of Northern Ontario.

- NO ONE should have to face hurdles when a victim of any kind of assault. Support needs to remain and even modernized to allow for adaptation to the other issues and effects that result from it.

- The sad realization is it still occurs even though it is illegal. I would like to reiterate that The Northern Ontario Party and myself feel that all Northern Ontarians are equal and if not treated as an equal then the laws will be enforced and violators will be punished to the full extent of the law.

How do we lessen the burden of Hydro,

- Northern Ontario should have its own publicly owned hydro that would include all 13 Northern Ridings and with the amount of Hydro used in Northern Ontario we would have excess amounts to sell off to the sold off Hydro One and their over paid executives. Facts that are not shared is that hydro in Northern Ontario is not used but shut down at off peak times (night) and Southern polluting hydro is used as there is no system in place to store or maintain extra hydro.

- All other parties talk about rebates and reductions but clearly they do not mention when it will happen before or after tax and which taxes are applied. I would introduce NO delivery cost. When the others say rebate of 12% here is a simple common sense approach. Don't take it in the first place and don't tax it before you take it.

- Let me go back to why are we even taxed on hydro and delivery charges. Let's get back to basics and eliminate the delivery that is being billed.

Learning Opportunities for the Indigenous (Training and help)

- I shake my head and fist at the other parties who say they will do this and that for the indigenous and yet they spend tens of thousands of 'visits' and photo ops to the areas. How about this instead of visiting invest that money you wasted to go there and do something they need and put that money into that project.

- Every Northern Ontarian deserves equality in everything and affordability and access to services of any kind.

Thank you for taking the time to read my responses to the questions asked of the 4 invited candidates of the 6 Nipissing Riding Candidates.