North Bay's effort not enough in loss to Steelheads

“We did a lot of really good things, we tracked hard. Our defensive zone coverage was really good, it was a very competitive hockey game.”
Dec 13, 2019 11:29 PM By: Matt Sookram 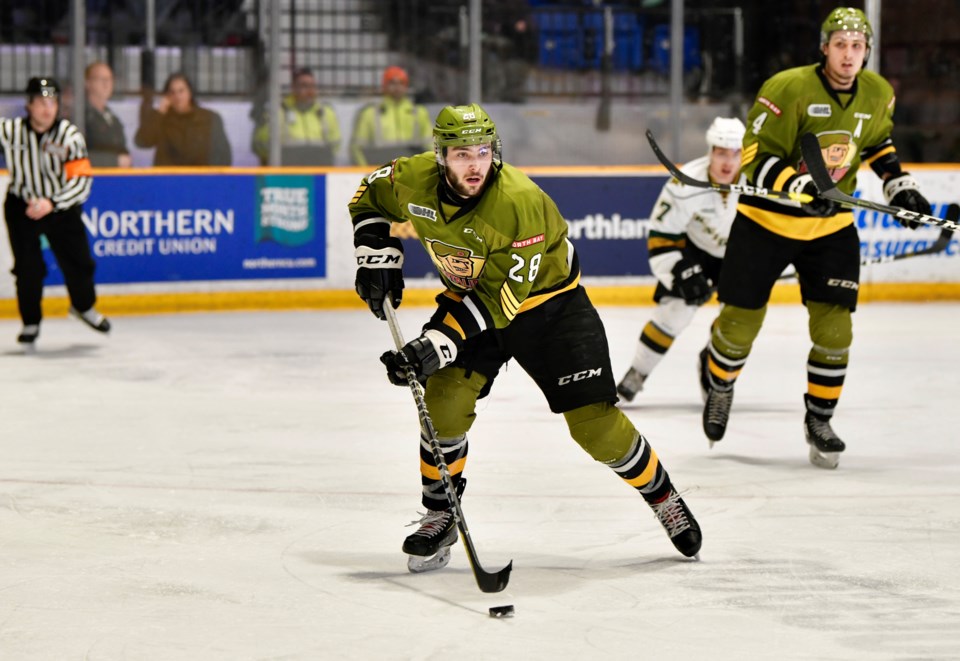 File Photo of Battalion forward Luke Moncada, who scored his 14th goal of the season in a 4-2 loss to Mississauga.

The effort was there but the result was not as the North Bay Battalion gave up a 2-1 third period lead in Mississauga and travelled back north after their central division foes saddled them with a 4-2 defeat.

Only 24 hours after a come from behind win at home against Erie, North Bay looked to keep the positive momentum rolling and for most of the game, they stuck with the Steelheads.

“I thought we got out of the gates a little slow, but we found our legs about 10 minutes into the game and I thought we had a pretty good road game,” says Battalion Assistant Coach Scott Wray.

“We did a lot of really good things, we tracked hard. Our defensive zone coverage was really good, it was a very competitive hockey game.”

It came down to one play in the third that turned things in favour of the Steelheads. The puck was shot from behind the net and came directly over the crossbar to the front of the net. North Bay netminder Joe Vrbetic made an initial save but a rebound chance went past him off the post and as he moved to the glove side, the puck came back to the blocker side where Cole Schwindt (7) was stationed and he banged home the ricocheted shot off the iron.

The goal was scored in controversial fashion as Nick Isaacson was in the crease and appeared to be in the way of Vrbetic while he attempted to get back to his blocker side post before Schwindt put the puck in. The goal was reviewed by the officials and then challenged by the Battalion but was held up as a good goal both times.

Meanwhile, North Bay had a goal called back in the first period on a very similar play. The difference may have been that on the ice, North Bay’s “goal” was waved off immediately by the on-ice official and Mississauga’s goal was called a good goal on the ice right away. How they got to that decision was not relayed to the broadcast booth, which is quite shocking considering how amazing the communication has always been between what goes on the ice and what gets sent upstairs.

Regardless, the goal Mississauga scored made it 3-2 with just over three minutes to play in the third and North Bay was not able to find an equalizing marker as the period was winding down. Even with a power-play advantage and the goaltender pulled for a six on four attack, the Troops had a tough time getting anything through to Kai Edmonds, who made 23 saves in securing his team the victory.

But sustaining a one-goal lead on the road for a team that is 1-15-0-0 away from their home rink this season is a lot easier said than done. And the more experienced Steelheads group were able to find a way to break through for a tying goal at 10:09 from Keean Washkurak (12), followed by Schwindt’s Game Winner and Washkurak (14) getting his second of the game to complete a three-point night when he fired the puck into an empty net.

“We knew they were going to come out hard in that third period,” says Wray. “We needed to get pucks behind their defense and knew that they were going to come down the walls hard, so we asked the guys to intercept pucks and have guys slashing across to support the puck. For the most part, it worked, but unfortunately, we’re going home with a loss.”

It was just the second game behind the bench for Interim Head Coach Ryan Oulahen and Wray says he’s getting a good feel for the team. He says, “He knows full well what he’s doing and pretty much we’re bouncing ideas off each other and it’s nice to have that dialogue on the bench and know what’s going on at all times.”

The advantage other teams have had over the Battalion on the road this year is the last change for the home side. Teams have been able to get the matchups they want and it has led to a lot of success for the opponents when the Troops hit the road. However, in Mississauga, North Bay seemed to have an answer no matter the personnel were on the ice.

“They were doing the little things that we’ve been preaching,” says Wray of the work effort the Battalion displayed in the loss.

“When we have all four lines going like we did last night and tonight, it’s a lot easier as a coach to put them out there.”

That means more ice time for the rookies and more learning experience as the team continues to grow and adjust to life at the OHL level. But there is still a steep learning curve as the youngest team in the “O” is finding out every time they step on and off the bus.

After the shakeup, earlier this week that the team went through, there was a lot of talk about making a push in the second half and driving toward a playoff spot. Mississauga sits in 8th place of the Eastern Conference, tied with Kingston for that final playoff position.

They are now 10-18-2-0 on the year with 22 points on the season after the win over North Bay which is 6-24-0-0 with 12 points. A 10-point gap at this junction of the season isn’t insurmountable, but it is more challenging when you play a game that could’ve taken away points from that team you’re chasing.

The new front office said that going forward, they will look to re-evaluate what they have over the remaining 40 games, and they want the players to understand this is a 40 game tryout as they shape the next team from which they hope to contend with.

Within that context, this team is 1-1-0-0 and had a chance to win games on back to back nights.