'Active residential listings numbered 354 units at the end of October. This was down 28 per cent from the end of October 2017 and marked the lowest level of supply for the month on record going back three decades'
Dec 3, 2018 10:30 AM By: Jeff Turl
Previous Next
1 / 1 North Bay, Ontario.
Expand
Previous Next

There are indications that the North Bay real estate market is rebounding in a strong way.

North Bay home sales posted a very strong October according to the North Bay Real Estate Board, with listings at all-time low for the month.

"Residential sales activity recorded through the MLS system for the North Bay region numbered 116 units in October 2018. This was an increase of 22.1 per cent from October 2017," according to the website. "This was historically very strong, standing just six sales below the all-time October record set back in 2012."

"Active residential listings numbered 354 units at the end of October. This was down 28 per cent from the end of October 2017 and marked the lowest level of supply for the month on record going back three decades."

Thursday, Zoocasa.com, a full-service Toronto brokerage released a report ranking 30 regions in Ontario based on the sales-to-new-listing ratio in each municipality,  including North Bay.

"Overall, Ontario’s housing market can be considered balanced with a SNLR of 56 per cent, according to CREA’s October report. However, this varies widely in markets across the province; recent data compiled by Zoocasa finds that, depending on their location, market price point, and local inventory, Ontarians face little, to very steep, competition when buying a home," said  Penelope Graham, Managing Editor, Zoocasa.

Buyers face the toughest conditions in markets where homes sell for less than $500,000. Ten of 12 municipalities could be considered sellers’ markets, including North Bay.

Thunder Bay, where the average home cost $225,945 in October, boasts one of the steepest sellers’ markets in the province with an SNLR of 90 per cent, as 205 of 227 newly listed homes sold within the month.

There is greater balance among Ontario’s priciest markets where the average home price is higher than $500,000. Only three of 18 municipalities in this price point can be considered sellers’ markets

Orangeville is the tightest sellers’ market in Ontario with an SNLR of 102 per cent.

Toronto is a balanced market with an SNLR of 57 per cent. 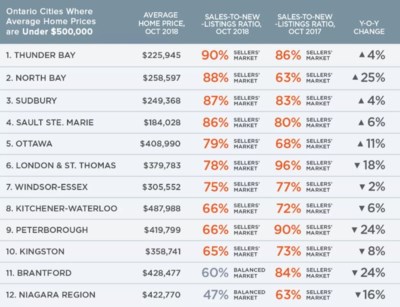