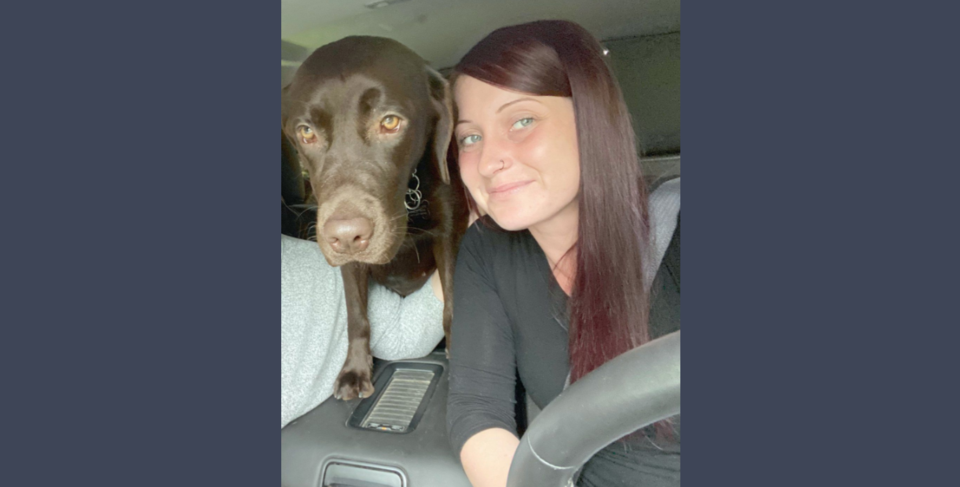 Lexi and her owner, Kandiss Gravel, hours before the accident. Supplied Photo

Lexi the chocolate Lab’s favourite thing in the world is a stick.

“She will try to sneak sticks into the house all the time,” laughs Danielle Duguay, Lexi’s owner’s sister. “She will do anything for a stick. She’ll go anywhere with that stupid stick.”

Lexi, 11 months, was hit by a truck on July 11 while walking with her owner, Kandiss Gravel, and Duguay on Pioneer Road. Duguay calls it an unfortunate accident.

After local vets said there wasn't much they could do, Gravel and Duguay drove Lexi to the Huronia Veterinary Emergency Clinic in Barrie. Her situation looked grim and vets told Duguay and Gravel Lexi might not make it through the night.

Duguay says Lexi’s vitals were at 20 per cent until Gravel came to comfort her. The next day they were back up to 100 per cent.

“She was almost gone,” Duguay recalls. “Her tongue and her gums; they were blue. She wasn't getting any blood to her face at all. They said, if we were 10 minutes later, they didn't think she would have made it.”

Gravel and Duguay drove Lexi to the Oakville Veterinary Emergency Hospital in Mississauga the following day for surgery.

Lexi is in a stable condition, but she has a shattered left femur and a dislocated sacroiliac joint (near the pelvis). Her pelvis is broken in two pieces.

Duguay and Gravel have been sleeping in Gravel’s car since Saturday evening to be near Lexi and ensure “every penny is going toward Lexi.”

Duguay admits some people have questioned why they would spend so much money on a dog's recovery.

“This is my sister's baby,” she replies. “This is her entire world and she treats them with all the love that she can give. It would be like her abandoning a child because she couldn't afford the bills.”

“They change everybody's lives, leaving a smile wherever they go and maybe a little bit of dog hair, too,” she jokes. “But I don't feel like anybody ever complains about that when you're getting hugs and kisses.”