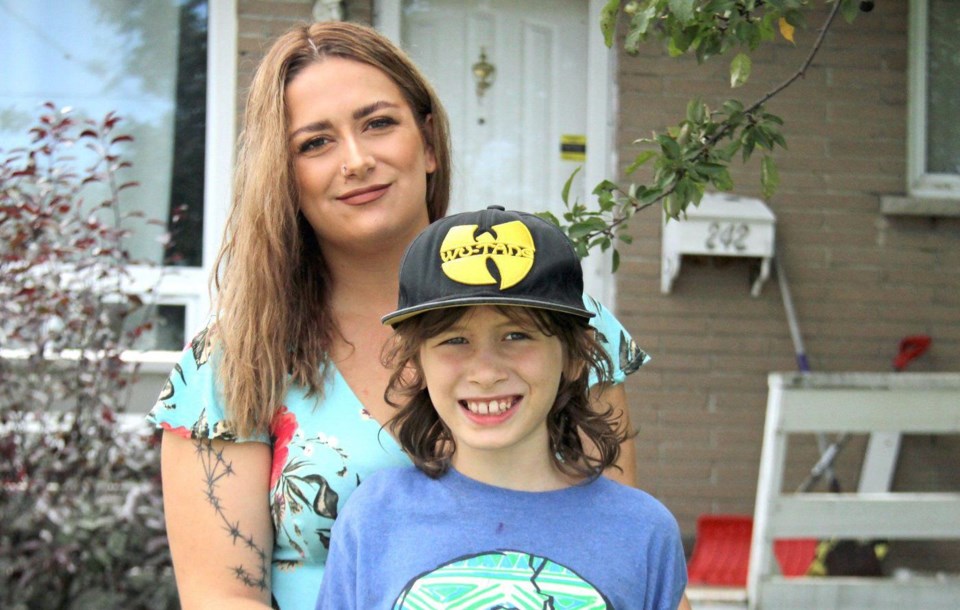 Jayce’s favourite thing to do is play in the water, but he doesn’t know how to swim. He can suffer from anxiety attacks if he is splashed or struggles in the water. He enjoys playing with toys, but often becomes frustrated by small things, causing him to have an attack.

Jayce’s mom, Taylor Lashbrooke-Etches, says a service dog would help her son with coping and keep him safe.

“He gets overwhelmed all the time, to be honest. It can be something really simple like it could be a toy bent the wrong way,” says Lashbrooke-Etches.

Jayce is non-verbal and has autism, ADHD, anxiety and OCD. Lashbrooke-Etches says he tries to run away weekly and she’s had to call police to search for him many times. She says it’s become more frequent since COVID-19 and social isolation.

Jayce doesn’t understand why he can’t go out as often, explains Lashbrooke-Taylor.

She describes their house as “Fort Knox,” with locks on all the doors and windows, and alarms in case Jayce tries to get outside.

She says it’s the biggest stress for her as a mother.

“I don’t know how to put it into words… People don’t understand. I can’t get anyone other than the two grandmas or respite worker to watch my kids. They cannot leave Jayce alone for a second. If I take a shower, it has to be when he’s asleep because he will take any opportunity to do something.”

He doesn’t have that dangerous element in his mindset.”

A service dog would stick beside Jayce if he tries to leave the house. Lashbrooke-Etches says the dog would help with Jayce’s frequent panic attacks, keeping him calm while they try to identify the trigger.

But, she says, Jayce changes around animals and the effect is almost instant.

“I’ve seen him around animals and he’s a completely different person. All he does is stick near the dogs. He’s so happy, he’s so calm. He’s interested in what the dog is doing and how he can help it.”

It can be difficult to take the time to train a dog, says Lashbrooke-Etches. Her family has been putting off getting a family pet because of how busy and stressful their lives have been. She says a service dog would help with the general stress of keeping Jayce calm and safe.

After being on a waitlist for four years, she says, they need the service dog now more than ever.

“It's like a car, we can make payment arrangements on it, but it's a huge financial burden for families, especially like with COVID-19.”

Unfortunately, service animals are not covered by OHIP, says Lashbrooke-Etches. She says it doesn’t help that Jayce can’t receive his Indigenous status card because the status ends with her.

People who receive the Ontario Disability Support Program Income Support can receive $84 a month to help cover the cost of care for the dog.

Lashbrooke-Etches says a service dog would be a life-changer for her family, including Jayce’s siblings, Inora, 4, and Sloan, 2.

“I honestly think it's going to make him much calmer and he's going to be able to relax more and get a good night's sleep. With the dog in the house, I’m not as worried about what will happen if he runs away. I don’t always have to have it in the back of my mind.”

Lashbrooke-Etches says her family will never forget those who have donated to help them get the service dog.

“It doesn't matter if they donated 30 cents… Any little bit helps and brings us closer to our goal. It’s going to be the biggest life-changer for my son.”

North Bay firefighters heading to Oregon to battle massive wildfire
Sep 18, 2020 4:00 PM
Comments
We welcome your feedback and encourage you to share your thoughts. We ask that you be respectful of others and their points of view, refrain from personal attacks and stay on topic. To learn about our commenting policies and how we moderate, please read our Community Guidelines.