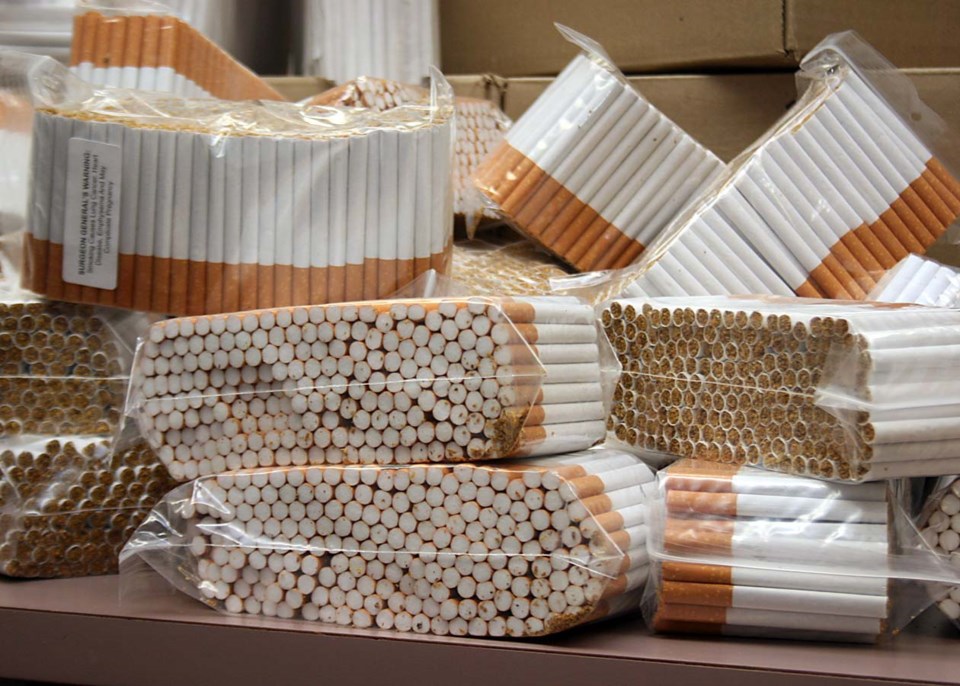 Illicit cigarettes sell for as little as $30, compared to legal cigarettes at $100. File photo.

North Bay ranks one of the highest for illicit tobacco use in Ontario, ranking second overall in the province behind just Sault Ste. Marie according to a just-released study of 19,934 cigarette butts discarded across the province.

The study conducted by WrightOn Field Marketing for the Ontario Convenience Store Association (OCSA), found that two North Bay sites were among OCSA's top 10: St Joseph-Scollard Hall school was third at 82.80 per cent , while Chippewa Secondary School ranked eighth with 67.90 per cent .

Three of the top five sites for cigarettes that OCSA considered illegal were in Sault Ste. Marie.

Illicit cigarettes sell for as little as $30, compared to legal cigarettes at $100.

As determined by OCSA, here are Ontario's top 10 sites for illegal tobacco use in 2016:

Municipalities with highest per cent of contraband tobacco:

Top municipalities by growth in contraband indexed over 2015 results:

"It's a disaster out here and nobody wants to fix it."

The percentage of contraband cigarettes found by OCSA in North Bay and Sault Ste. Marie was up sharply over the past year.

In the Sault, it rose from 20.6 per cent last year to 75.5 per cent when the latest study was conducted in September of this year.

Variations can occur because the survey captures a point-in-time snapshot of changing patterns of illegal activity, but Bryans says higher levels of contraband tobacco use are often related to proximity to First Nations communities.

OCSA is a not-for-profit association representing more than 7,500 gasoline and convenience outlets across Ontario including major chain operations Esso, Mac's, Petro Canada and 7-11, but 50 per cent of its convenience store retail members are independent family stores.

OCSA members attribute 40 to 60 per cent of their sales to tobacco products, and sell 99 per cent of all legal tobacco in the province, Byrne said.

"You people are being flooded by illegal tobacco," he says. "Let's start protecting our youth."

Yesterday, Byrne was at Queen's Park, briefing senior officials in the provincial finance ministry about the contraband tobacco issue.

"It's very discouraging," he says. "The numbers are accurate. We went back and double-checked the count."

The following is the full text of an OCSA news release:

Illegal tobacco use in Ontario surpasses 30 per cent

NOVEMBER 28, 2016 (Toronto) – Today, the Ontario Convenience Store Association (OCSA), released an updated study on illegal tobacco use across Ontario. For the third year in a row, the use of illegal tobacco has increased in most surveyed locations, and retailers warn that new regulations on flavoured tobacco as well as plain-packaging of tobacco products could see this number climb even higher.

The survey, conducted by WrightOn Field Marketing, collected 19,934 discarded cigarette ‘butts” at 134 sites across Ontario in September 2016 to understand the market share of untaxed cigarettes in the province.

The study found that, of samples collected, 32.8 per cent of cigarette butts were from illegal sources – an eight per cent+ share change (24 - 32.8 per cent) from the 2015 contraband study.

Incomplete surveys resulting in no butts, inadequate samples or closed site locations were excluded from these results.

The study shows large fluctuations in prevalence of illegal tobacco in certain regions throughout the province.

While the survey provides only a momentary snapshot of contraband use, the apparent increase in use across the province is a cause for concern.

“We are deeply concerned about the continued use of contraband tobacco products in Ontario, and particularly troubled by persistently high rates of illegal tobacco use at schools and hospitals,” said Dave Bryans, chief executive officer of the OCSA.

“Far too many young people still have access to these adult products through illegal channels,” said Bryans.

Jeff Wright, owner of WrightOn Field Marketing, noted that a number of factors such as price point and availability can contribute to illegal tobacco use.

“Cost to consumers, financial hardship as well as proximity to contraband smoke shacks are all elements to consider when looking at Ontario’s contraband tobacco problem,” said Wright.

The federal government’s proposed changes to plain and standardized packaging for tobacco products may further increase illicit tobacco use in the province, said Bryans.

“These packages are very easy for sophisticated traffickers to replicate, which will make it extremely difficult for enforcement officials, retailers and consumers to distinguish legal products from contraband.”

Convenience store retailers are also worried that new regulations restricting the legal sale of flavoured tobacco products (including menthol) will result in increased contraband and counterfeit tobacco entering the market. “We already know that there are 30+ types of menthol cigarettes available illegally in the province,” said Bryans. “Once these products are banned from our shelves, consumers will turn to the illegal market to find them.”

Retailers are encouraging all levels of government to consider the impact these regulations will have on the illegal tobacco market, and dedicate appropriate resources to enforcement to ensure there is no spike in illegal tobacco trafficking.

They are also asking that the government consider implementing a possession, purchase and tobacco consumption ban for youth.

“What this study tells us is that there is virtually no location in Ontario where contraband tobacco traffickers don’t have some footprint,” said Bryans. “Banning the possession, purchase and consumption of tobacco by minors the way we do alcohol would go a long way reducing the reach of these criminal networks.”

Retailers remain vigilant in restricting access to youth and acting as a partner in enforcing the Smoke-Free Act, while collecting tax revenue for the Ontario government that fund infrastructure, hospitals and schools.

David Helwig's journalism career spans seven decades beginning in the 1960s. His work has been recognized with national and international awards.
Read more