“The OPP conducted an investigation and canvassed the area near the racetrack to speak to residents about the letter,” OPP said.
Sep 22, 2020 8:45 AM By: Dave Dale 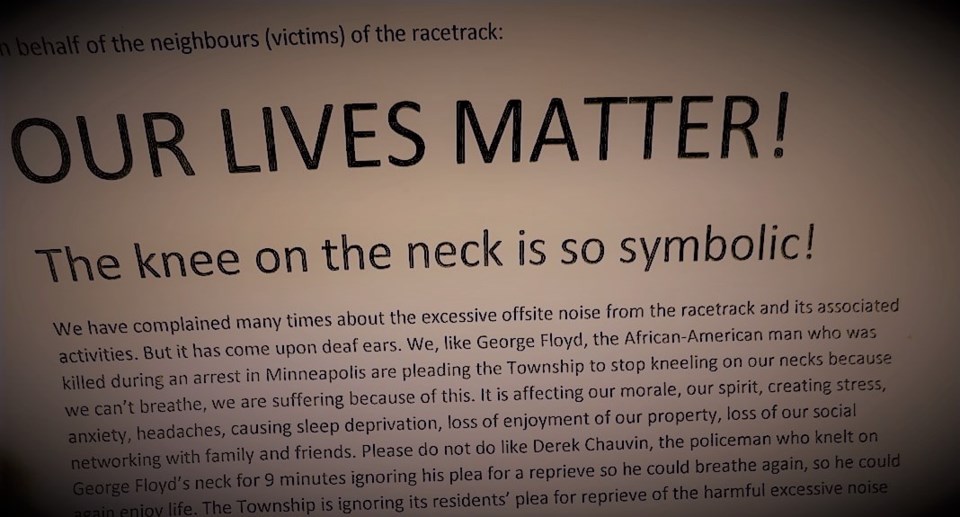 The Ontario Provincial Police found no grounds for criminal charges after investigating a controversial letter circulated in Bonfield last week.

Delivered to residents through Canada Post, the unknown author drew parallels to offsite noise from a Development Road drag strip and the killing of a black person by police in the USA.

Mayor Randy McLaren asked the OPP to investigate Friday, saying the author of the letter was promoting hatred of the Bonfield Event Park owners, council, and police. McLaren also said the person who wrote it appears to be in crisis and he was worried it may go beyond writing a letter, suggesting they may need help with a mental health issue.

“The OPP conducted an investigation and canvassed the area near the racetrack to speak to residents about the letter,” states a written response to BayToday’s request for an update. “The OPP have concluded that the letter in question does not equate to a criminal offence.”

Asked if the OPP had considered checking on the person’s mental health status, they said: “At this time the OPP have not identified the person who wrote or distributed the letter.”

Public reaction to the letter was predominantly negative with comments posted to BayToday stating it was in very poor taste to compare noise issues and the killing of George Floyd by police in Minneapolis, US.

Some of the commenters, however, supported the general point being made regardless of the distasteful analogy, arguing the noise impacts the quality of life of nearby residents. They questioned whether the drag strip’s economic impact outweighed the potential loss in property values and new investment by people going elsewhere for a peaceful country setting.

McLaren said concerns about noise mitigation were alleviated after the bylaw officer did a site visit at the Bonfield Event Park and the property owner responded sufficiently to email correspondence. New owner Lisa Groves told BayToday they are following “to the letter” noise mitigation recommendations outlined in the latest noise impact study.

Drag-racing noise still an issue in Bonfield
Sep 15, 2020 10:00 AM
Comments
We welcome your feedback and encourage you to share your thoughts. We ask that you be respectful of others and their points of view, refrain from personal attacks and stay on topic. To learn about our commenting policies and how we moderate, please read our Community Guidelines.