'What really impressed me today was this partnership between the North Bay Military Family Resource Centre and Nipissing University Student Union was initiated by the youth'
Aug 28, 2017 3:00 PM By: Chris Dawson 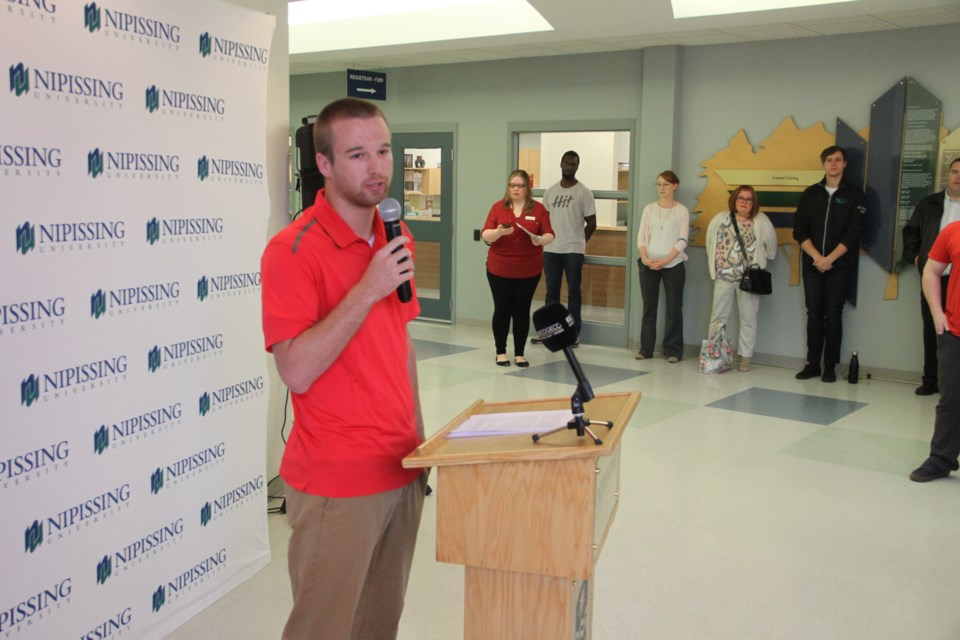 Cooper Allen, NUSU's VP of Governance and Legal Affairs, talks to the audience at a press conference at Nipissing University Monday morning. Photo by Chris Dawson.

Cooper Allen does not have any connections to the Military but he has made one today through the University he attends.

Allen, the VP of Governance and Legal Affairs, came up with the idea to connect the Nipissing University Student Union with the Military Family Resource Centre to help connect veterans, family members of servicemen or women, and veterans families with the school.

“It originally started with the Red Friday’s Campaign that I had been part of back in my hometown just as an awareness piece and initially we reached out to some various bodies to see if there was anything more that was apparently going on,” explained Allen at a press conference at Nipissing University this morning.

The 20-year-old Barrie native reached out the North Bay Military Family Resource Centre and the immediately climbed on board.

“It is a bit of an identification and referral process, now when NUSU identifies that they have students who are either veterans, veterans family members or regular forces personnel family members, they can help to connect students with our family resource centre who otherwise may not know that we are here,” explained Tessa Clermont, Executive Director at the North Bay Military Family Resource Centre.

Colonel Mark Roberts, the 22 Wing Commander, was thrilled to see the youth wanting to support the military locally.

“What really impressed me today was this is the youth, this partnership between the North Bay Military Family Resource Centre and Nipissing University Student Union was initiated by the youth, by the student body itself, so it really sends a strong message that support from North Bay is through all ages and different areas, like a multi tiered system of support for military families.”

“It is our hope that members, veterans, and families will feel accepted, understood, and valued for their important skills and experiences as they adapt to the university environment. NUSU, the MFRC, and the Veteran Family Program are committed to easing the transition from military to civilian life for members, veterans, and their families,” said Tina Thomason, Veteran Family Program Coordinator for the North Bay Military Family Resource Centre.