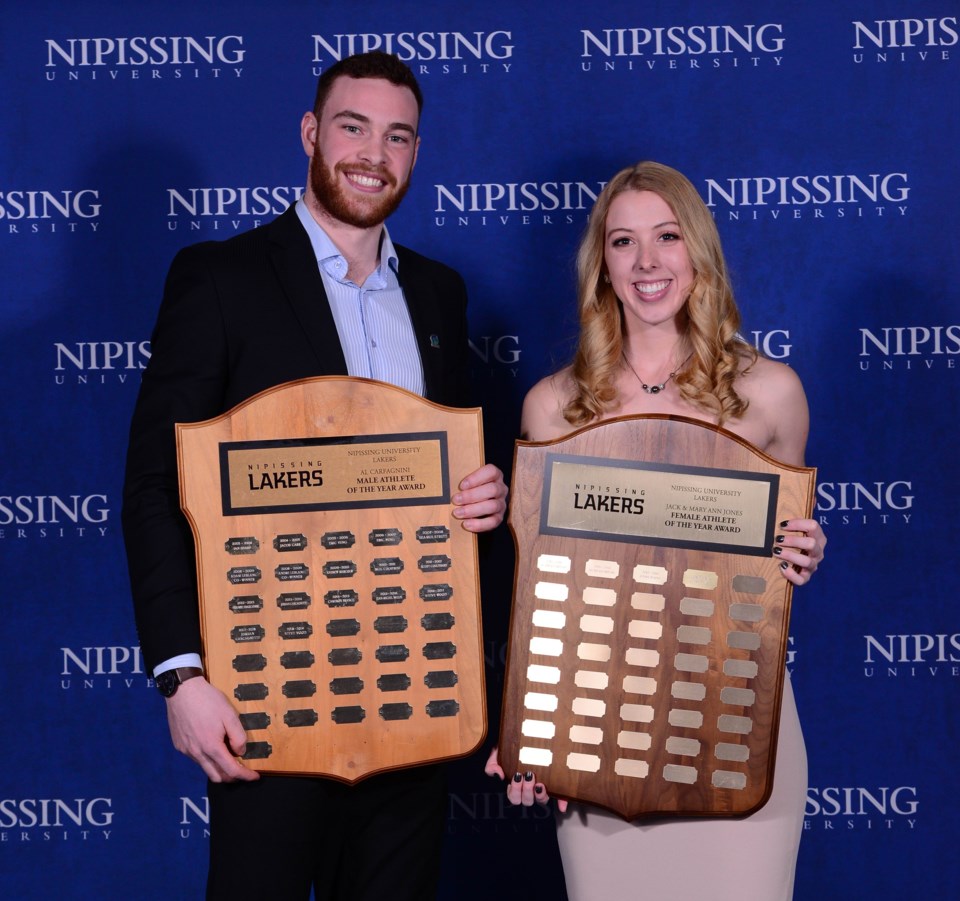 Steve Wood and Zosia Davis show off their athlete of the year awards. Photo submitted.

Nipissing University handed its hardware at its 26th annual Awards Gala Tuesday night at the RJS Athletic Centre with almost 300 people in attendance.

The big awards went to Zosia Davis and Steve Wood.

The outside hitter was named the winner at the annual Lakers Athletics Banquet and caps off an extremely successful career.

The Newcastle, ON native once again led the team in scoring, averaging 3.94 kills per set and a total of 244 kills – a new career high.

Playing in all 18 matches, Wood failed to reach 10 points just three times and two of those occasions, he finished with nine points.

He recorded at least 20 points five times, with his season-high, 29.5 points, coming in a five-set loss to Toronto in November.

He fired home 26 kills that match, also a season-high.

Wood surpassed the 600 kill mark for his career and wrapped up his career with 744 points in 79 matches with the Lakers.

He was also named an OUA Second Team All-Star.

On the women’s side, Zosia Davis is adding yet another highlight to her resume as an impressive career comes to an end.

The fifth year Nipissing Lakers women's hockey team defenceman is wrapping up her time with the Lakers and she's going out in style.

On top of being named an OUA first team all-star, for the second straight season, Davis is this year’s Jack and Mary Ann Jones Female Athlete of the Year.

The Cobden, ON native was the team's top defender, piling up 15 points in 21 games – her second highest total in the five years.

She finished with three goals and 12 assists to reach that 15 point total.

During the season, Davis had five multi-point games, a three game point streak where she recorded seven points (one goal, six assists) and a two goal game.

Her lone multi-goal game of the season came against Guelph as the Lakers topped the Gryphons 2-1, where Davis had both tallies.

In a victory over Laurentian, Davis recorded a season-high three assists as well.

Overall, the Lakers had a 6-3 record when Davis recorded a point.

While the point stand out, as she finished first in goals, assists and points amongst Lakers defenders, she also ranked high in terms of the OUA.

She was tied for eighth in goal and second in assists and points.

Her puck moving ability, along with her smooth skating and overall confidence with puck made Davis a force on the Lakers blueline all year – and all five years – so it comes as no surprise she has earned this honour once again.

The following awards were handed out throughout the banquet:

Athletes of the Year