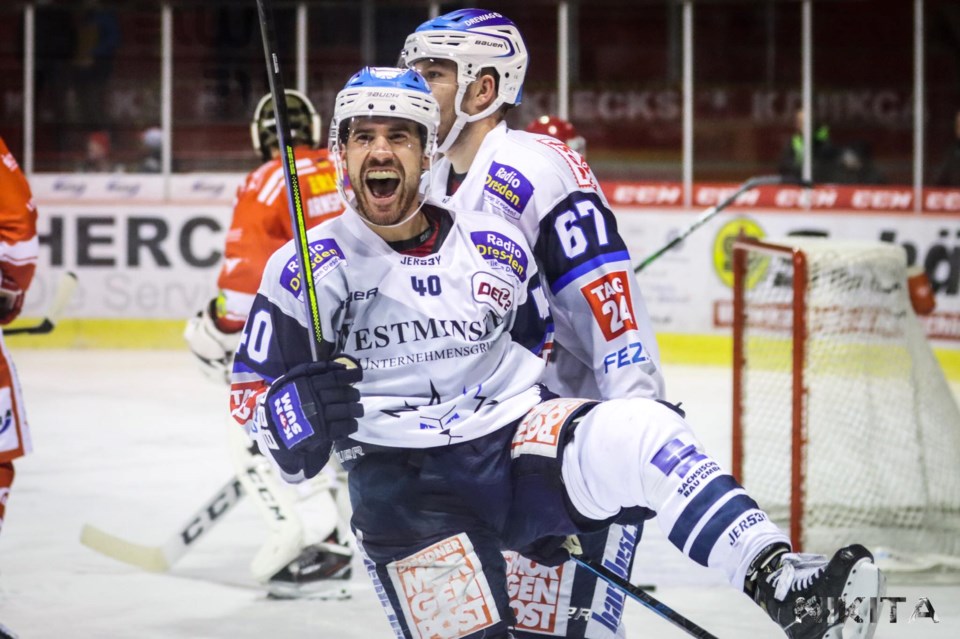 On paper, Nick Huard again looked like he had a solid hockey season in 2020-21 with the Dresden Ice Lions in the DEL II, which is Germany's second division pro hockey league.

The 30-year-old former North Bay AAA Trappers star finished his fourth season in Dresden scoring 21 goals and 27 assists for 48 points in only 49 games.

But those numbers do not indicate the struggle that Huard and his team went through.

The Ice Lions struggled in the standings, had a number of key injuries, and of course a few COVID-19 cases as well.

The team finished with a 19-24-0-3 record, which resulted in a mid-season coaching and general manager change.  Oh, and of course, due to COVID-19 the season was played without fans.

The COVID-19 restrictions in Germany also kept his parents Glen and Frances from visiting this season. His girlfriend also stayed in Guelph and did not visit him either. That left Nick Huard with a lot of lonely days and nights when he was not on the ice with his hockey team.

"I travelled there by myself, so no friends, no family," he said.

"My girlfriend did not come so it was just me. We were hoping and optimistic everyone could come at some point of the season but the lockdown was right through the entire season."

"It does, because as a hockey player as much as you love the game, you love the social interactions," he said.

See related: Nick Huard: From cut in the OUA, to one step from the AHL

Huard's hockey career has taken him to the Quebec Major Junior Hockey League, the Maritime Junior 'A' League, the OUA, the ECHL and even the AHL before traveling to Germany in 2017.

He believes he still has some years left to play the game he loves.

"Once it is all over and I am back home now I cannot go out after a season that was that depressing all around," said Huard, who now makes his off-season home in Guelph.

"My future is pretty much up in the air. I am surprised too now that I am 30 years old because I still feel like that young kid who still loves the game and I think I have got a couple of years left but this is the first year where I kind of have no idea where I am going.

"We are still in talks with the team I play for in Dresden but again they have all new management and a new coaching staff so they could have different views on the team and where they want to take it. There is some interest from other clubs in Germany. Personally, I would like to stay in Germany, I love it . You are very well taken care of so it is kind of up in the air, I am kind of letting the agent see what is out there and pick and choose as we go."

Wherever he plays, Huard is looking forward to playing the game in front of fans again in 2021-22.