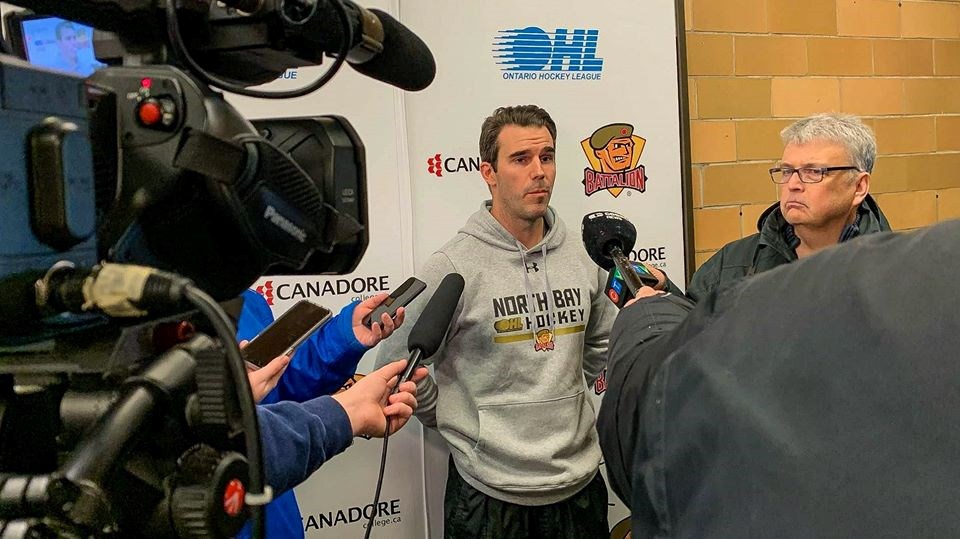 Thursday will be a night Ryan Oulahen has been looking forward to for years. He will be at the helm as the new Head Coach of the North Bay Battalion when they host the Erie Otters at Memorial Gardens.

“It means everything to me,” says Oulahen about being named just the second Head Coach in the teams 22-year history. “I’m a Battalion.”

A truer statement could not have been made. Oulahen played for the Troops during their years in Brampton from 2002-2005, finishing his career as captain of the team. He returned to be an assistant coach under Stan Butler's tutelage in 2011 and followed the team to North Bay as well. He was an assistant coach until the end of the 2015-16 season and spent just over to years in Flint with the Firebirds before returning north as a skills coach with the Troops at onset of this year.

On Tuesday afternoon, via a press release, the team announced their Director of Hockey Ops and Head Coach Stan Butler has been removed from those roles and assigned to a Special Advisory role with the teams Owner Scott Abbott. That placed Adam Dennis in the role of General Manager and the Head Coaching job was awarded to Oulahen, who found out on Monday.

“That was a crazy day for sure,” he says.

“It’s always kind of been my dream to stand behind the bench. You never want it to happen in a mid-season form and the way it did happen. It was definitely a shock. But when I got the call from Mr. Abbott I was just thrilled and honoured. I took some time to decide, but the decision was made pretty quick.”

It’s not just on paper where Oulahen’s name is reflective of the franchise, “since I played for the Battalion, funny enough, I’ve had two green vehicles, I seem to always buy green jackets. I wear camo, my kids wear camo, my wife wears camo. It is in me and nobody understands how unique this franchise is. I really think that is why my blood is pumping a little bit, and that is why I’m here right now. That jersey means a lot more to me than it might mean to someone else.”

We rarely get to see a genuine sentimental move made in junior or professional sports, but this move to bring Oulahen on board isn’t just based on emotional investment, it’s a move that brings in a renewed approach to the club. An approach that excites both the staff and the players.

Captain Brad Chenier says, “we’re excited to work for Ouly here and get things on the right track.”

Chenier says in his first address to the team, Oulahen got the players to get behind the move and look towards a fresh start. He says, “It was a great speech, he basically said he was very honoured to wear this jersey himself and the green stuck with him. Obviously the speech touched us and we’re looking forward to getting this going.”

The teams leading scorer is one of the few Battalion players that would have been familiar with Oulahen before his stint as the skills coach. Chenier got called up as a 16-year-old to play a few games with the Battalion and says in those stints it was an enjoyable experience to work with Oulahen.

Chenier himself is in a role no other player of captain has found themselves in before this point; a mid-season coaching change as Captain of the Troops.

He says, “I have to be that positive guy. There’s a lot of young guys on the team that are going through a change that they won’t be used to. I just have to be the backbone and lead them in the right direction. I have help with my leadership group and I have every bit of confidence in them. I think we’re going to get through this and I think some fans will be surprised with what they see over the next couple of games here.”

That’s another key factor in this move. They aren’t bringing in someone that has never been in this position at the Ontario Hockey League level. As mentioned, Oulahen was a coach in Flint for two seasons, but he says there were lots of factors that led to it not working out south of the border.

He says, “there’s a lot of different things that went on there, but certainly family is my number one priority. If I could not be going home to my kids tonight, and sleep in my own bed then I would not be here today and that’s the biggest thing. The timing is everything and the timing is right, right now, to come back with the Battalion and give this a shot.”

There’s also the pedigree of having coached at various high levels with Hockey Canada.

Oulahen says he had been looking forward to a day where he could once again run a bench, “you get the itch a little bit doing skills and now, knowing the personnel that’s in there, knowing there is a high ceiling that we can tap in to. It’s a challenge but we know it’s in there.”

So the question fans will have is how will that translate into what they see on the ice. For Oulahen, that means the team has to get back to having an identity. He says, “we have to get back to being the hardest working team in the Ontario Hockey League, and that is what the Battalion is. That is what we have to do. That will be a challenge, but we have to go from there.”

They get an opportunity to do that on Thursday night when the Erie Otters, who have lost their last five games and are just one game above .500 but are last in the Midwest Division of the OHL’s Western Conference. Like the Battalion, the Otters have been in a funk that has spanned several weeks now. Since Oct 18th the Otters have just five wins in their last 18 games. They will also be without one of their star players Jamie Drysdale. The Otters rearguard and projected first-round pick in the coming NHL Draft sits tied for third in scoring among OHL blue-liners with 31 points.

It’s a perfect matchup for a Troops team looking to make a statement that a new era in Battalion history is about to get underway.

Good morning, North Bay!
Jan 23, 2020 6:00 AM
Comments
We welcome your feedback and encourage you to share your thoughts on this story. We ask that you be respectful of others and their points of view, refrain from personal attacks and stay on topic. To learn about our commenting policies and how we moderate, please read our Community Guidelines.