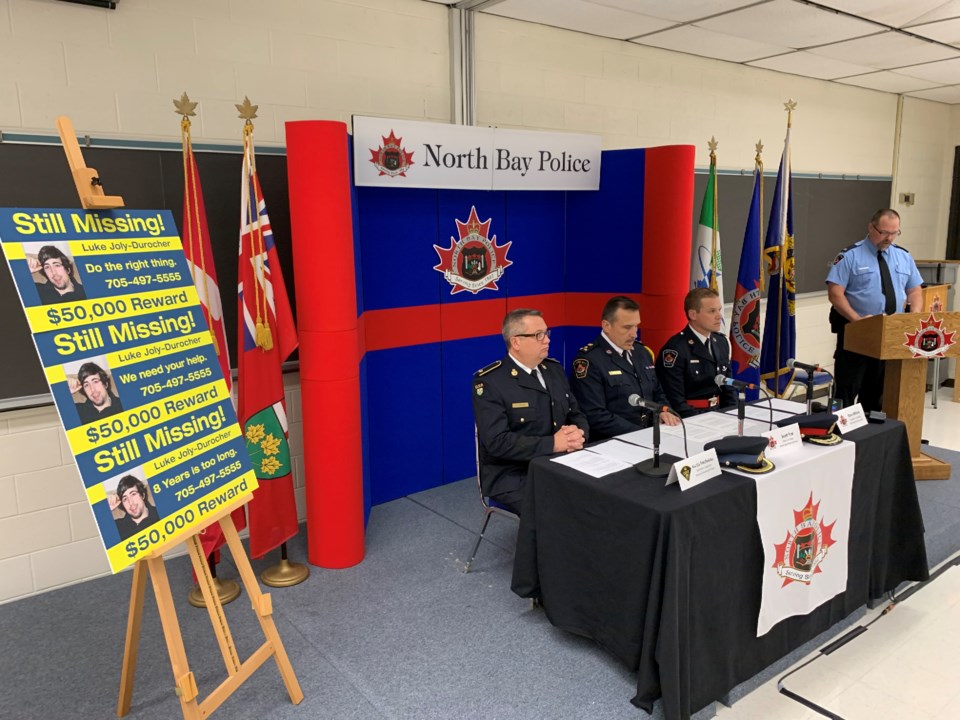 The North Bay Police Service and the OPP held a collective new conference urging the public to come forward with more information about the disappearance of Luke Joly Durocher back in early March of 2011.

New billboards are being put up on both Highway 11 and 17 near North Bay with the hopes that the signage will generate more information about the missing person investigation.

Over the past eight years, North Bay Police Service investigators have conducted hundreds of interviews, and followed up on as many leads and tips, trying to ascertain what had happened to Luke.

Luke Joly-Durocher, who was 20 at the time of his disappearance, was last seen shortly before midnight in North Bay's downtown on March 4, 2011.

"I know the city police and the OPP all have an interest in solving this case," said Scott Tod, North Bay police chief.

A downtown bar captured images of him outside late that evening and his bank card was found in the downtown core about 11 days later.

Police now say that after Joly-Durocher was refused entry to Cecil's Bar downtown, he attended Shooters bar located at the Voyageur Inn on Delaware Street.

Police believe he was observed socializing at the bar and police confirmed later that Luke obtained a ride from at least one of the patrons.  Additional witnesses have come forward and police know other people may have been socializing with Luke before he disappeared.

Tod believes the new information is a positive sign.

"I think that is an important part that the investigators have learned since 2011 recently working with the OPP," said Tod.

"We have learned a number of things that they will be doing an investigative follow-up on."

Kurtis Fredericks, detective inspector, major case manager, OPP criminal investigation branch says they hope that as time passes people, when they have the time to contemplate and realize they have information, they would come forward.

"The other part of a missing person investigation is sometimes people do not realize how important the information they now have is," said Fredericks.

"They may not have witnessed the direct crime but in terms of when they saw someone with a particular person that can be very helpful."

North Bay Police, with the assistance of the OPP and the Ministry of Community Safety and Correctional Services, is offering a reward of up to $50,000 to anyone who comes forward with information concerning the person or persons responsible for his disappearance.